The late delivery of our new Suzuki GSXR750 K4 meant that we couldn't use it in the first race of the season, but it's up and running now.

This season, the emphasis will be on safe progress, as we've all learnt that no matter how fast you ride, you can't win with the bike in the pits or in the gravel trap. With the new machine, we can expect good progress through the more crowded class, and look forward to the podium finish we were so cruelly denied last year.

The new bike has still not been released to us from the importers so the day was set for the riders to use their own machines, blow away some of the winter cobwebs and reacquaint themselves with the track. In Colm's case it was also to face his nemesis: Druid's corner, the scene of his crash in the final round last season.

The morning started rather damp but by the second session a drying line was appearing and soon both Colm and Simon were posting very respectable times considering they were on road bikes with road tyres.

New rider Chris Dutton showed his form on a track he had never seen before and he, too, set out to embarrass other riders by riding up the inside of GSXR1000's and R1's.

The day concluded with all three riders bringing their track times down and all fuelling/pit stop strategies in place for the first race on Saturday 10th April.

The new bike should be with us in the next few weeks, so the race is on to convert it from a road bike to a fully fledged Endurance racing machine. Should the bike not be ready then the team has a trump card to play... all will be revealed. 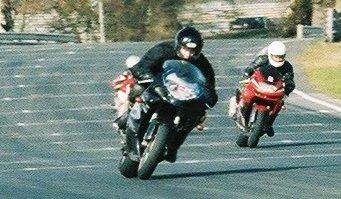