And now onto Pembrey in Wales. The scene a year ago of the birth of the team and also of our first crash(es). The riders this time out were Dave, Colm and Shaun. The bike had been re-jetted on the dyno and the lambda sensor was showing that we were running leaner than before and thus our fuel economy should improve. The weather forecast for the weekend was wet and windy; nothing new for Wales, so wet and intermediate tyres were the order of the day.

Dave went out in free practice and returned saying yet again that there was an improvement in the motor. Colm did first Qualifying session followed by Shaun in the second, with both riders posting a 1.08 on old tyres that were well past their sell by date. Dave followed with a 1.09.

The bike then was shod with new tyres before the race. Gresham decided to run Pirelli Diablo Corsas as an intermediate tyre. Strategy was for a 5-stop race.

The bike went out on the warm-up lap and - believe it not - it ran out of petrol. Dave had to push the bike back from the rear of the circuit (we don't do this on purpose, but Dave does end up pushing the bike a lot). The fuel line had become kinked under the tank, starving the carbs of fuel. It only took a minute to fix, but it meant that we had to start the race from the pit lane.

The flag dropped and the whole pack of 42 bikes roared past the end of the pit lane before we were allowed out. In last place Dave set about hauling back all the other riders.

He quickly settled down to a steady rhythm, and by 12.30 had brought the team back to 4th place and was only 7 seconds behind Blackcat Racing in 3rd. Dave was consistently knocking out 1.04 laps, when on the 27th lap he crashed on Honda curve.

This was almost an exact replica of John's crash last year but fortunately this time the bike didn't look too bad. The problem was that it was lying on the outside edge of the circuit and Pembrey has no tunnel to get bikes back into the pits in the middle.

We checked the bike via binoculars and spoke to the marshals via their radio and found out that it was only small damage and that the bike was rideable after a few minor repairs. The only problem was that we had to wait for a break in the traffic via a pace car in order to get the bike back.

Forty-five agonisingly slow minutes passed before an incident prompted the arrival of the pace car on the track. Colm ran across to the bike and pulled it back into pit lane, whereupon the mechanics descended on it like starving locusts to a cornfield.

Dave meanwhile was ok with only a slight sprain to the hand. It would seem that he was pushed wide by another rider onto a dirty part of the track right off the racing line. The front end just washed away from him - there was nothing he could do.

The bike needed new brake and clutch levers, both foot rests and a great deal of tape and zip ties to put the battered fairing back together. Meanwhile the heavens had opened and the course was very wet. However, by 1.55 when Shaun took the bike out again, a dryer line had developed so he was still running intermediate tyres.

By now we were well behind but, due to others crashing and engine failures, we were in 5th place. We felt we would continue to race as similar misfortunes could happen to any of the other teams in front, and points were important.

The rain started again and Shaun pitted saying that wet tyres were needed. Colm mounted the bike with the new tyres fitted and headed off into monsoon conditions.

The pace car came out three times during this session as more and more riders crashed. Meanwhile Colm doggedly hauled the bike round for another 30 laps. 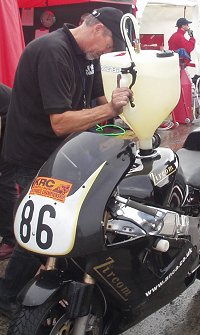 At 3.05 Colm pitted and Dave felt he was fit enough to do another session. The bike was refuelled and Dave joined a now drying track. After 5 laps Dave pitted again saying that a dry line had developed and the intermediates should go on. These were duly changed and Dave left the pit lane and headed off to Hatchet hairpin at the end of the start finish straight, whereupon the bike high sided him over the handlebars and dumped him unceremoniously onto the track. The marshals quickly removed the bike from the racing line, this time to the middle of the circuit and the ambulance was sent out to collect Dave.

Shaun went out to the bike and brought it back in to the pits. Dave was whipped off to the medical centre and subsequently the hospital with a broken rib, bruised pelvis and a sore backside. Max accompanied Dave to the hospital and kept in touch with the team.

Again Gresham and Phil worked on the bike and at 3.50 Colm took the bike back onto the track.

With a drying line, Colm upped his pace to settle down to steady 1.07s. Given the conditions this was a good pace and although we could only improve our position if some misfortune descended upon another team, Gresham and Max felt that the team should continue to circulate.
At 4.30 Colm pitted and Shaun took the bike out again. The bike continued to circulate in 5th position. 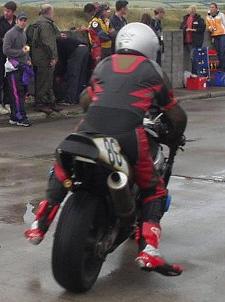 Shaun pitted and with no pressure on us the tyres were changed to wets and Colm went out for the last stint. Again the rain poured down and the pace car came out for several sessions.

After 6 hours, 2 crashes, 128 laps and numerous pit stops and tyre changes, Colm took the chequered flag for the team. Uprite Racing had got 5th place and importantly, points for the championship. Dave was released from hospital that night and hopes to be riding at Oulton Park. We wish him a speedy recovery.

We are now 4th in our class in the championship by 1 point to our friends Blackcat Racing. The last race is on Saturday 4th October. Whoever is ahead on the track on that day takes 3rd place.

May the best team win!