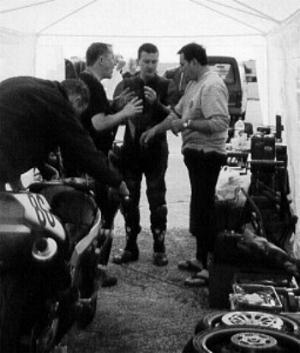 The team arrived in Northern Ireland to race at the Bishopscourt Circuit. The riders for the race were to be Dave, John and Phil. The practice sessions went well and modifications were made to the suspension set-up and the new engine was performing well. The bike went through scrutineering and the team got an early night before race day.

Dave took the bike out for a practice, followed by qualifying sessions by Phil and then John. There were further adjustments to the suspension and finally Dave did the last 10 minutes qualifying session. Uprite Racing had qualified 4th with a time of 1:21.51. The fuel consumption had been calculated on an average between the 3 riders and a strategy of a 5-stop race was undertaken. However this strategy would have major implications later...

There was going to be a two-lap warm-up before the race started. Dave, our first rider, was standing on the opposite side of the track, ready for the Le Mans start, with John holding the bike. Dave ran to the bike, thumbed the starter button... nothing. The starter was dead! The bike was bump started and we had to start the bike from the pit lane, which meant we started the race in last place! Dave battled on through the pack of 37 bikes and settled into a steady pace of 1:22 a lap, and by lap 40 he had moved the team up through the field to 4th in Class. But then disaster struck.

The fuel consumption had been based on an average of the 3 riders during the morning practice sessions. Max had taken into account that Dave was running fastest out of the three riders, but the bike still ran out of fuel on the start-finish straight.

Dave pushed the bike in and once in-field the bike was re-fuelled by Gresham and Phil shot off into the race in pursuit of the pack with the team now back down to 5th place.

The Clerk of the Course called Max to the race control. The official line was that we had incurred a five-minute stop/go penalty during re-fuelling and Phil was black-flagged in to take the 5-minute penalty in the stop box. Phil came in on lap 65 as Gresham had noticed during the stop-go penalty that the fairing support was broken. A quick refuel and a running repair, and Phil was out again settling into 1:23's.

On lap 83 and with the bike now in 5th place, the bike came in for refuelling and for a rear tyre change. John sped out of the pit lane and quickly rejoined the race, settling down to a steady pace of 1:26. Max and Gresham later worked out that the difference in lap times had led to a massive difference in fuel consumption where Dave was using almost 20% more fuel in an hour that John. The team would have to run the faster riders for fewer laps or slow the pace down for fuel consumption.

John had kept up a steady pace and had consolidated fourth place six laps behind third. On lap 123, he brought the bike in for a swift 32-second pit stop followed by Dave re-entering the race. However, after only one lap out he was called back into the pits as we noticed something hanging off the rear of the bike. Gresh applied a zip-tie to the catch tank, and off the bike went, Dave quickly settling down into a steady rhythm. UKRM, the team in 3rd place, were not circulating as fast as Dave and by the end of the hour the deficit was only 12 seconds!

Lap 164, and out went Phil hot on the tail of UKRM. The weather at this point started to turn for the worse, with slight drizzle on the back of the course made the two flick-flacks very interesting. Phil passed UKRM to go into 3rd place. Our tyres were holding up well and Phil brought the bike in on Lap 204.

John was due out in the final session but volunteered to let his ride go to Dave as he felt that with such a slim lead and the unpredictable weather conditions we should go with Dave for the final session. Dave was lapping about 4 to 5 seconds a lap quicker and this was the buffer that we needed. Dave by now was looking tired but nevertheless threw his leg over the refuelled bike and accelerated away to maintain our 3rd place.

Meanwhile at race control we learnt that in 4th place it was no longer UKRM, but the Honda RC30 of Fuillaghtyn, eleven laps behind. With less than an hour to go we seemed destined for 3rd place. The top two teams were some 16 and 19 laps ahead. All we had to do was to consolidate our position.

But then disaster struck - but this time not for Uprite Racing. Wolf Racing, who were lying in second place, crashed. We had less than 45 minutes to make up sixteen laps and hope that Wolf Racing would stay in the pits long enough for us to make up the difference.

Wolf were furiously repairing their bike in the knowledge that we were hunting down those laps. As they worked, Dave kept up the pressure, until at last our Pit Girls were able to post P2 on his pit board: Second place was ours.

Finally the chequered flag fell, and Dave took 2nd place for the team. In only our third race, with two previous DNF's, we had finished Second in Class, a marvellous achievement by all of the team.

In the Parc Ferme the champagne was sprayed and the trophies were awarded to the elated riders. After 6 hours, 441 miles and 241 laps at an average of 81.77mph, the riders were shattered. The girls on the pit signalling were on the their last legs, the bike was looking like it had been through the wars, and Max and Gresham breathed a huge sigh of relief.

At last, we had not only finished, but had got a podium as well.