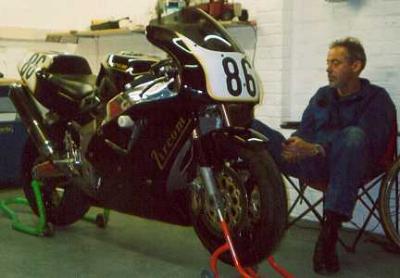 Oh, the joys of testing in the rain!

After many months of preparation, the day of the bike's first public appearace was almost upon us. The new machine had had many problems with it's original engine, so we finally installed an ex world Endurance motor into the chassis and set off for Norfolk.

Testing started in pouring rain at 9am. Dave brought it back complaining of lack of power/carburettor problems. Shaun and then John both did sessions confirming much the same but with added electrical problems caused by the continual rain, which made the engine/carburettor problems even harder to diagnose.

Ben and Gresham worked on the bike all morning and well into the afternoon session, but finally Dave took the bike out to knock out 12 uninterrupted laps at race pace. Shaun then did the same but both confirmed that the bike still needed some work on the engine below 9000rpm.

The overall synopsis? The chassis was working extremely well, the brakes needed some improvement, the electrics needed to be made waterproof and the engine required serious surgery to improve power.

And so the fateful day had arrived. The team was finally going to race.

Ben, Gresham and Phil had worked tirelessly on the bike for three days. It was race ready, but still there were problems with the engine pulling below 9000rpm. It would seem that that engine required more time on the dyno!

We sailed through scrutineering, and so then it was on to practicing and then qualifying. Shaun went out on free practice to scrub the new brake pads in and to see what improvement had been made to the engine since our test day.

The bike returned and Shaun confirmed that, although all the electrical problems had disappeared, the engine was still without power under 9000rpm.

Dave, John and Shaun then took it in turns to do the qualifying sessions, ending 7th in class. This was down on what we'd expected, and all the riders agreed that the handling was superb and that the only way that the bike could compete given the engine problems was to 'ride the wheels off it' through the corners, as it was out-handling a lot of the other bikes out there.

Unfortunately, since the engine was not pulling well, the fuel consumption was horrendous. Although our original strategy called for a four-stop race, with our current fuel consumption, it could well turn out to be a six-stop.

At 12 noon the race started with a Le Mans start. Dave ran for the bike and pushed the starter into life and off the bike went into a mad 1st corner crush of 46 bikes.

Dave continued circulating at around 1:19 as instructed. This was to maintain position and to conserve fuel consumption and tyre wear. At lap 23 the pace car came out as someone had crashed at the chicane. This created more problems for the team as we felt the fuel consumption would, bizarrely, be worse, as the carbs were not working well when not on full throttle.

After 11 laps under the pace car and our 33rd lap, Max and Gresham decided to pull Dave in. However, due to the pack being so bunched up, Dave missed the 'IN' on his pit board. Next lap round he indicated that he saw it and that he was coming in next lap.

The team crossed their fingers as they knew the bike was running on fumes. As Dave approached the final chicane before the pits the bike ran out of petrol.

Dave pushed the bike the 50m to the in-lane of the pits, whereupon Gresham and Max took the bike off a now hyperventilating Dave, back to the pits.

Fuelling and rider took less than a minute, and Shaun roared off down the pit lane to rejoin the race. The fuel stop had lost us a total of 4:20.

Shaun quickly settled into a steady rhythm and started to move on up the field. On the hour mark, despite our longer fuel stop, we were lying 5th in class. After 34 laps Gresham decided to bring Shaun in early so as not to run out of fuel again, with the team now up to 3rd place and just two laps down on 2nd place. 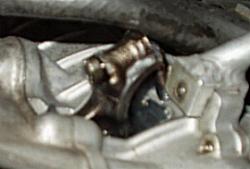 Shaun complained that the bike was too slow powering out of corners and was losing out continually on the straights. Also, worryingly, it seemed to be slowing at the end of the back straight.

John took the bike out after a quick fuel stop. On his second lap, as he approached the pit lane, the bike died. Luckily he was close enough to push it in, but this time there would be no going back out. One of the con rods had punched a hole through the crankcase. It was the end of today's racing for us.

The riders and support team were obviously disappointed at the outcome but overall the team has learnt from this race and would be back in 4 weeks time at Bishopscourt in Northern Ireland. A new engine will be installed this week and dyno time has already been booked.