It was 2002. We were all sitting in a hotel bar in Pouilly, France, after an enjoyable weekend watching the Spa 24-hour endurance race. After a few beers, it became clear, as these things do, that we had more than enough talent in that room to race ourselves. I mean, how hard could it be? And so on.

Then Kirsten, who had been listening with increasing exasperation, said, 'Well, if you're that good, why don't you form a team?' and before very long we'd begged and borrowed enough gear to talk our way into the KRC final as a wild card entry.

The bike got severely bent, but we'd learnt enough to realise that we had the talent and the drive, and that if we were going to do this seriously we had to get ourselves onto a more professional footing. We raised some cash, found some sponsors, and thus was Uprite Racing born. 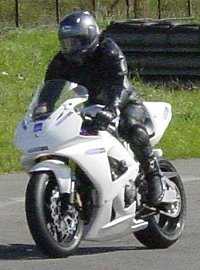 In 2002, the team raced as a wild card entry at the final round at Pembrey. Having planned all along to enter into the 2003 National KRC Endurance Racing Championship season, we had been looking forward to a whole winter of fettling. However, after extensive lobbying we managed to get accepted as a last-minute wild-card entry in the 2002 finals... giving us only two short weeks to put it all together under the name of Bikeology Racing, as this was the name of Dave's Track Hire company and we hadn't even thought of a team name yet.

Dave donated his race Honda Fireblade for this one race so, after an initial practice at the Snetterton track, the team hustled off to Wales for the weekend of 28/29 September, comprising three riders - Dave, Max and John - and Gresham as team manager, Phil as Mechanic.

After a mad rush to acquire a fuel quick filler, jerry cans, race exhaust system and power commander, pit board (home made), tyres, pads, a bunch of spares, and to get everyone an ACU licence and KRC membership - we were ready to race, just.

We arrived at Pembrey on Friday night and headed to the circuit on Saturday morning in time for scrutineering. The bike and all riders got through fine. With transponder fitted to the bike and our pit area marked out, we got ready for three hours of practice time.

None of the riders knew Pembrey at all, and so we were all unfamiliar with the bumpy tight corners and complex apices which dominate the circuit. The start/finish straight leads to a very sharp hairpin, something that Max got to study closely as he late-braked into a slowing bike and somersaulted the bike into the track during his practice session.

This tested the team's ability to pull together and fix the bike in time for qualifying. We begged and borrowed some spares, dug other bits out of Dave's race truck and got the spanners out. The bike was ready with an hour to spare, but Max was strapped up with an ice pack and unable to race.

Qualifying began with Dave and John setting times for the team. Of the 45 teams and around 130 riders, the fastest lap time across all riders in each team is used to decide each team's starting position in the race. Dave and John were soon whipping round in touch with the middle-order teams and eventually John set our fastest time of 1:06.90,
which meant that the team had managed to qualify 35th on the grid out of 45 teams.

Everything was set for race day on Sunday. All the team needed was a third rider. Enter Phil - the mechanic who was expecting to do the spannering and not a lot else. How wrong he was.

The pit was ready with Tracie, Vicky and Kirsty on stop watch and pit board duty with Gresham and the injured Max as mechanics. The team practiced pit-stops and calculated optimal fuel consumption. Slicks were chosen and tyre warmers fitted ready for the count down. Dave completed his warm up laps and lined up ready for the Le Mans start
with John holding the back of the bike.

Go! Dave ran over and thumbed the starter to accelerate off up the straight with 45 bikes all around him piling into the hairpin together. Just 9 weeks after an alcohol-fueled discussion at a hotel bar in Spa, Belgium, the team were competing against the likes of Mike Edwards and fully sponsored FIM standard endurance race teams!

Dave upped the pace steadily to a fastest lap of 1:06.48 with regular 1:07s for the majority of his hour on the bike. A pace car incident slowed things down and it was time to bring him in before the fuel ran out. Frantic gesturing from Gresham brought Dave in for a highly professional pit stop. With Max and Gresham on the fuel quick-filler and Tracie on paddock stand, Phil was leaped onto the bike and roared off, posting steady 1:08s for the whole of his session, helping to put the team into 27th position after 97 laps.

Time for John to take over from Phil after another very slick fuel stop. John immediately got up to speed before the pace car came out again while another crash was cleared away. John circulated in line behind the pace car in the company of great riders with a decade or more of endurance experience. Then the pace car withdrew and the race resumed at full lick.

As John tipped the bike into the most difficult high speed corner on the track, the bike low-sided from a front end slide, clipped the grass verge and tumbled spectacularly end over end into the tyre wall - with John following it into the grass. Vicky went a whiter shade of pale on the pit wall until she saw her man get up nursing a sore neck.

Unfortunately this meant that the race was over for the team but we were delighted to learn that we had reached 27th position in the race with 104 laps completed after 2hrs 10minutes of racing.

John went to Carmarthen hospital for a check up but was discharged with severe bruising of his torso. The information and experience gained from this entrance has been invaluable and has helped Uprite Racing gain entry into the 2003 season as a permanent race team. 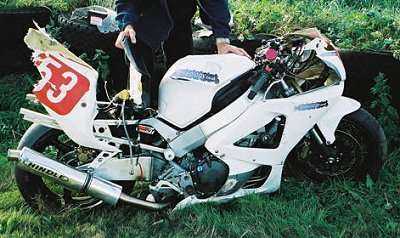