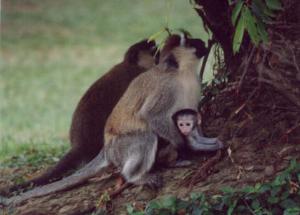 The journey back to Kampala turned out to be the low point of the trip. For a start we weren't entirely sure where we were going to stay - we'd hoped to be able to stay with the parents of a friend of Fiona's who were working for MAF. We had stayed with them on passing through Kampala from Mbale and left some of our things with them. However, they were very busy with other guests
and couldn't really fit us in, but had offered to try and book us a room in a local guesthouse. The price they said was a bit more than we wanted to pay - for a start it was more than the Red Chilli Hideaway, where we had stayed during our weekend in Kampala and which we loved - so we weren't
really sure whether we'd want to stay there for the two or three days. Basically we weren't really sure what they had organised for us, so we wanted to head out to them first. This meant that we wanted to be in Kampala by mid-afternoon - trekking around and dealing with taxis and matatus after dark was not something which we wanted to be having to do. 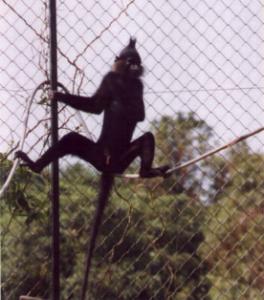 With this in mind we headed out of Visitours at about 6am, having to rouse the staff in order to leave, and sought a bus. There were two standing there, and the conductors of both buses tried to get us aboard. Neither had anyone on them, and we really wanted to wait for a while to see which looked like it might be ready to leave first. Unfortunately our hesitation seemed to make us fair game for further persuasion. One bus conductor seized Fi by the wrist to take us off to his bus which she was not particularly impressed about. The rival conductor tried to promote his bus to us, at which point the man holding Fiona's wrist took a swing at him. Things swiftly began to degenerate into a brawl in the main street of Kabale before the sun had even risen. We shot off and boarded the bus of the rival conductor, on the basis that we didn't fancy travelling with a guy with a tendency to punch people.

Unfortunately the basis failed us. Our newly chosen (and paid for) bus filled up much more slowly than its rival, and didn't leave Kabale until about 10am - three hours after we boarded the bus. We worked out that we'd probably reach Kampala at about 4pm and could go to the Makindye suburb to pick up our things and decide what to do, especially if we got a taxi. Of
course, once we'd established this, the bus broke down. We spent an hour and
a half hanging around while something unspecified was fixed, unable to grab
our bags and head for the first matatu because the conductor had vanished
with the key to the hold of the bus.

In the end we didn't reach Kampala until dusk and decided that we might as
well get a taxi straight out to Chillis and stay there, and simply visit
Makindye the next morning to fetch our stuff and say hello to Fi's friends.
With the luck that had served us unerringly badly that day we picked
probably the most obstreperous taxi driver in the whole of Kampala. I beat
him down to 8,000USh for the journey, but when we got in the car he promptly
asked us how much we were going to pay him.

Thus began a hellish journey filled with pounding headaches and a raging
argument, as he claimed we had agreed first 10,000, then 12,000, then 10,000
again. Things were only compounded by a diversion and traffic jam which led
him to furiously press for more money on the grounds that we hadn't told him
that he would have to get a longer route and therefore need more fuel. Fiona
promptly flummoxed him by her knowledge of petrol prices and fuel tanks and
her ability to do mental arithmetic and prove that he would make a huge
profit even with 8,000Ush. When we finally reached Chillis we were so
exhausted and suspicious of him that I insisted on getting our bags out of
the boot before giving him any money. This led eventually to me shoving him
very hard as he appeared to slam the boot on Fiona's Rwandan drum as I
reached for it - our last piece of luggage. It turned out that he'd merely
not seen it in there, and I had to apologise profusely and give him his
10,000USh (on account of the traffic jam) whilst Fi dissolved into manic
giggles before I could retrieve the drum. It goes without saying that we
were overjoyed to find that Chillis had empty beds.

We spent two days in Kampala, mostly in the craft market, buying all our
souvenirs and gifts and sorting out what things we wanted to take home and
what could be thrown away. We still ended up having to pack our bags like 3D
jigsaw puzzles in order to fit everything into them. We looked at our pile
of things - large rucksacks, camera bags, a drum and a carved table - and
realised that we'd never get it all into a full matatu. We checked our
finances, and took a private taxi out to Entebbe where we planned to
collapse for the last two days of our trip. 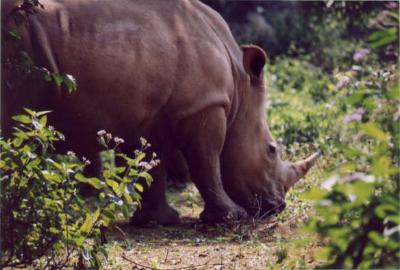 Our flight was leaving Entebbe early on Monday morning, so we had a day and
a half in which to relax. We quite fancied a trip to the zoo, so that we
could take photos of lion and leopard and pretend that we'd seen them in the
wild. We also intended to spend some time by the swimming pool of one of
Entebbe's more upmarket hotels. We were staying very near a couple of them
on the Lake Victoria side of the Kampala - Entebbe airport road (the only
way to reach Entebbe is via Kampala) and in the end never went to the main
part of the town.

We spent the Saturday afternoon at the swimming pool at the Windsor Lake
Victoria, where we were joined by a large number of French marines who
appeared to belong to the EU peacekeeping corps and were probably on their
way to or from the Democratic Republic of Congo. On the Sunday we went to
the Entebbe Wildlife Centre, where the animals have all been recovered from
poachers, to finish off rolls of film (not on the French Marines, who also
put in an appearance). Inevitably we didn't see any lion or leopard. There
was a stone plaque in the lion enclosure in memoriam whilst the leopard
simply appeared to be AWOL. Instead we had a great time watching the
chimpanzees having a whale of a time on their island.

Fundamentally, we were ready to head home. We didn't want to leave Uganda -
we knew that after about half an hour in England (actually about five
minutes in Heathrow's Arrivals Hall) we'd be ready do board the first plane
back to Africa - but we were tired of being on and off buses and matatus, of
packing and unpacking. We knew we were due to go home, and so we'd wound
ourselves down to the point at which we were more than ready for it.