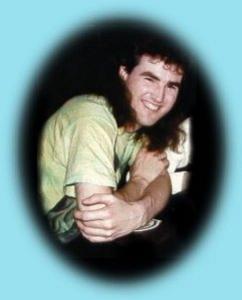 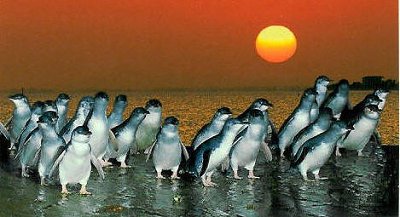 In the evening, it was time for the Penguin Parade. Every night at dusk, a colony of Little Penguins, who have been out all day chasing fish in the Southern Ocean, swim back to their roosts on Phillip Island. In order to get from the safety of the water to the safety of their dune burrows, however, they have to cross an open expanse of beach, and this is where a stepped auditorium has been constructed so that the public can sit quietly and watch.

It really is an amazing and extremely amusing sight. The birds swim lithely into the shallows, and then attempt to struggle to their feet. Bearing in mind that they can't use their short flippers to aid them, this is something of an effort, and since they don't dare go out onto the sand - where a predator may be waiting - they do it in the waves, using the momentum for one wave to stand them up, only for the next one to knock them down again. More and more penguins gather in little clumps, appearing in flashes of white and then tumbling like dominoes, making occasional forays onto the shore but always chickening out and running back into the waves, until suddenly a group will seem to get a quorum and all head up the beach together in a purposeful waddle. Although it really is comical, their persistence is awe inspiring. 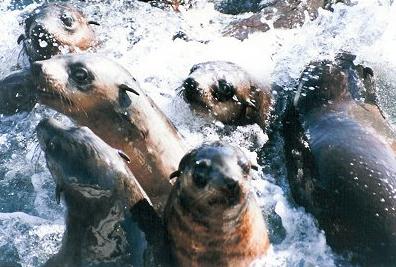 The influx lasts for hours, and if you follow the birds up into the dunes, you can see them determinedly heading up through the dunes, pedalling their little bodies through the undergrowth, and issuing plaintive little 'brrrrp?' noises and then listening for a reply in an attempt to find their mates and their nests. To think that they go through this every night!

The following day, we caught a boat out beyond The Nobbies to Seal Rocks. It was a pleasant ride, with the crew telling tales of the local people, and rich kids on sea-doos buzzing in our wake. In the distance we could see the Rocks sticking out of the sea. 'You can't see them', said the nearest crew member, 'but I can see about ten thousand seals right now'. He wasn't kidding. When we got closer, we realised that what we'd thought was rock was practically all occupied by seal, and all around were more seals playing in the waves, swimming out and then surfing in on their bellies, leaping out of the waves in gay abandon. The boat was an instant hit, too. Around us, the sea boiled with eager brown faces, a veritable seal soup. I've seen seals before, but never like this.

A Letter from Phillip Island - Part One