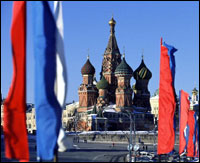 Andrey Demin, a pioneer of the valuation profession in Russia, founder of the CJSC 'The International Valuation Centre', senior officer of the Russian Society of Appraisers, died on 19th May 2006, aged 50.

Despite Russia's newly-found pluck of revivalism, it remains at heart yet a poor country, having been looted by many corrupt interests from within and without ever since its 'independence', with close to a third of its population living on the edge of poverty, deprivation and squalor. That such glaring inequities have been suffered to exist is chiefly the irreversible result of consciously destructive economic polices of the 'shock therapy' foisted on Russia in 1992 by a much-celebrated bunch of top officials that sold themselves into the unholy service of black-marketeering interests.

Among the strands of shock therapy the story of privatisation stands out as a powerful testimony to bigoted benightedness into which the whole nation has allowed itself to be plunged — at no time during the mass privatisation years had the majority of the citizens of the country been endowed with anything from the devolution of people's industries but bogus privatisation cheques not worth the paper they were printed on. Whole swathes of Russian wealth were grabbed out for far short of 1% of their real value. The story would not have been that bad if a proper market infrastructure assisting privatisation were allowed to be developed in the first place and among that the national valuation industry — a noble calling to ensure that nobody is short-changed in the matters of importance — is pre-eminent.

It was of marginal importance, virtually inexistent at that time in question and substituted in its functions by questionably-funded operatives making a deliberate hash of all that is fair in pricing working under the auspices of the State Committee for [Public] Properties. That the profession was not established at the time when it could have been most helpful, that whatever roots it put forth were thwarted before they were able to legitimately encircle the domain of mass privatization, and that for several crucial years before it was
finally recognized in 1996 it had no role to play in monumental matters that were then afoot — let us blame no one, but respect whatever founding stones were laid at the edifice of its future legacy.

Mr Andrey Demin was among the first Russian pioneers of the profession to leave his indelible mark on it. His formal background had all the semblance of outer conventionality typical of the late Soviet period. Born in 1956, he went into higher education in the years in which the considerations of prestige were beginning to underpin the choice people were to make of their vocation. He chose to become a
construction engineer. Fortunately, in those years it was possible to not embrace any profession whole-heartedly, if one did not wish to — formal attendance of duties was all that was required and getting reasonable salary and accommodation from the State was automatic. Mr Demin was lucky not to waste the opportunities that such an environment afforded for self-study and attainment of knowledge. In latter years, his colleagues were amazed at his cognizance of American literature — there are few people in Russia who can quote passages from Thoreau smoothly. And, in truth, Russia was an easy place to be a
dissident at the time. Hardly anyone would have guessed, looking at Mr Demin's assured and businesslike comportment — with more than a hint of military air and unquestionable obedience to it — that he had such a keen penchant for out-of-the-way scholarly interests of small hours. Perhaps he had no other strong personal hinterland to retire into, with his marriage coming badly unstuck.

When the drowsiness of the dying days of the Soviet Union dissolved into the whirlwind of reforms, Mr Demin, like many other like-minded people, found himself compelled to take a new road and the windows of opportunity started to look virtually unlimited. After many fresh starts and hard landings, he came to associate himself in 1993 with the
founding members of the Russian Society of Appraisers, the first
independent body of valuation practitioners to be set up in the country with the remit of organizing the supervision and ensuring the representation of the nascent valuation profession. This, even then, was a dynamic organisation with a membership count of over 1,000 and many regional branches by the end of the first year of its operations. There was a level virgin field of prospects on which to raise the seeds of the civilized professional market: to draw up the national valuation
legislation and standards, establish best practices and venues for the resolution of valuation-related disputes, set up educational training for valuers and secure the appreciation of the profession within academic circles. These proved to be long and arduous tasks, of which the contours of completion are only now beginning to be seen clearly. There were many setbacks in the struggle to establish the profession in such a way as to make it serve public interest equitably: the groundbreaking valuation law that had passed through both chambers was vetoed by the then-president and put on hold until 1998. In 2001, the
profession fell under the supervisory grip of debilitatating bureaucratic controls. Of triumphs and setbacks Mr Demin had more than his fair share, and he took them all to heart.

On Mr Demin’s 50-year jubilee celebrations, a few months before his
sudden death from heart attack, many speakers were invited to what seemed, at the time, to be a well-organised and smooth occasion to mark his passage into the second half of his life, but with hindsight seems to uncannily resemble a send-off. They took notice of his unsung contribution to the well-being of many national industries. One of the party toasted Mr Demin by remarking that, had he chanced to be living in Britain, to bestow upon him a Lordly designation would not have been an exaggerated appreciation for his efforts. Mr Demin graciously replied that he had not done enough yet to be the conduit for the Font of Honour
into the profession. This researcher — and other colleagues of Mr Demin — for once, disagree.