Pen Spinning Content from the guide to life, the universe and everything 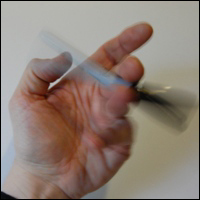 Drummers, students, bored businessmen at dry meetings - you've seen them all do it. As effortlessly as lounging with a cup of Earl Grey and yet as magically enticing as prestidigitation1, the pens, pencils, or drumsticks roll up, and down, and around their fingers in a gravity-defying act of dexterity.

But why sit and gawk when you can learn to do it yourself? It's easy, good fun2, great exercise for your fingers, and it's a really neat way of showing off to the less co-ordinated your awesome skills and long, tapered fingers!

Before we start, remember that it pays to start off slowly, and then build up speed as you gain confidence and experience. A little slow practice never hurt anyone, and you damage less pens that way as well. There is plenty of time for lightning speed and whizzing pens when you master these moves. And be gentle! Many a time an overzealous novice has impaled his unsuspecting neighbour when he flipped his pen too hard4.

Now that you're all set, let's start with the first maneouvre.

This is definitely the easiest pen-manipulation maneouvre. It is supposed that nobody had ever bothered to give it an official name; however, for the sake of clarity and easy reference, it will be referred to here as the drumstick roll, for the reason that the majority of the people performing it are drummers.

There are two ways of performing this roll - from the outside in, and from the inside out.

From the Outside in

Start by holding the pen between your ring finger and your pinky around the first joint (the one closest to the tips of your fingers) in such a way that the 'outside' end of the pen (the one away from your palm) is a little longer than the 'inside' end.

Run out of fingers, have we?

Repeat these maneouvres until you get the hang of it, or until your pen drops. At this point pick it up, and get back to practicing. Once you get more comfortable with it, you may find it easier when rolling the pen up to your index finger, to flip it up quickly and with sufficient force with your middle finger to propel it over your joint and back down the the ring finger in one smooth stroke.

From the Inside Out

This is almost the same as the 'outside in' maneouvre, except you start from the top, and your fingers press outward away from the palm instead of inward.

This is the maneouvre that every self-respecting student should know5, although it is slightly harder to negotiate than the drumstick roll.

Here's the picture: your pen rolls forward and backwards over the joint of your thumb (which does absolutely nothing), propelled by by your index and middle finger.

Hold your pen between your thumb and your index and middle finger. Your thumb should be on one side of the barrel, and the fingers on the other. Position your middle and index fingers so that they are about an inch apart, and your thumb so that it is at an equal distance from both fingers. The end with your thumb on it should be the cap end, and should be significantly shorter than the opposite end; this should be around the pen's centre of gravity.

To get the pen to spin over your thumb, gently push the barrel with your middle finger so that it rolls anti-clockwise over your thumb joint; at the same time, move your index finger back and curve it (bend it at both joints) to receive the barrel. You will now have the pen between your fingers and your thumb again, except that now the far end of the pen will be closer to your thumb and middle finger than the cap.

It is recommended that you practice the forward roll before proceeding with the backward one. Do not get to concerned when you push too hard and your pen flies out of your fingers, which will inevitably happen the first few dozen times you do this. Just be patient, pick it up and continue with your exercise.

Now here comes the fun part: propelling it back. Curl your index finger inwards (what other way is there), and at the same time push the barrel of the pen so that it rolls clockwise over the joint of your thumb, catching it between your thumb and middle finger. The cap end is once again closer to your thumb than the far end. This will be the position for your subsequent spins.

Now that you have mastered the drumstick roll and over-the-thumb spin, you are ready for the final trial: the fingers roll. This is a maneouvre similar to the drumstick roll, only your pen doesn't make 180° revolutions around your fingers. Also, it's a great deal easier to drop your pen when learning this maneouvre, so make sure you have a cheap pen when you start out.

The beauty of this maneouvre is that once you get it right (which may take anywhere from a few weeks to a few months depending on your dexterity and the amount of practise you put in), you can do a lot of really neat stuff with it. One adaptation of this maneouvre is to actually roll the pen between your joints instead of simply see-sawing it from finger to finger, so that the ends of the pen trace circles as you move them upwards and downwards. (This looks a great deal grander, more artistic, and more difficult than it really is, especially if you do it really fast). Another is to roll the pen in place a few times before propelling it upwards or downwards, thus adding to the 'complexity' of the maneouvre (at least, in the eyes of whoever's watching).

What Can I Do Now That I've Mastered all These Spins?

Anything you want to! Let your imagination run wild. Try these maneouvres with forks, spoons, sporks, chopsticks, knives (at your own risk - the Researcher who wrote this refuses to take responsibility for any injury incurred by spinning razor-sharp steak knives), and whatever else you can get your hands on. Learn to do it with your other hand, and spin pens with both hands. (This is more difficult than it sounds, especially if you're spinning the pens in opposite directions - another great stunt). Try it with your eyes closed, or behind your back.

Just make sure someone's watching you as you perform your dazzling displays of blindingly fast pen spinning. Hey, before you know it, they'll be begging you to teach them, and then you'll get some entertainment yourself, watching them send pens flying into their unsuspecting neighbours when they attempt to spin the pens over their fingers...

1Sleight of hand.2And it gives you something to do at excruciatingly dull seminars.3A long, large paintbrush would be ideal.4Only joking.5This Researcher's personal record is 150 backwards-and-forward spins.