Isle of Wight Shipwrecks: 'Pacific Glory' Content from the guide to life, the universe and everything 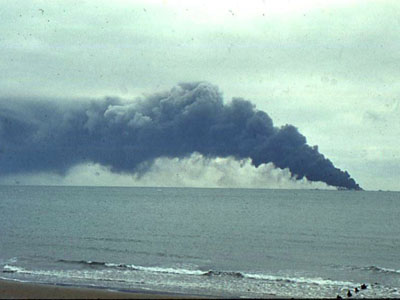 The luckiest escape that the Island's shores have ever had from a shipwreck involved the 43,000-ton Liberian super-tanker Pacific Glory, which carried a crew of 42 and 70,000 gallons of African crude oil.

At 9pm on Friday 23 October 1970 the massive Pacific Glory was travelling up the English Channel headed for Rotterdam. She was about six miles off St Catherine's Point when the 46,000-ton tanker Allegro veered straight towards her, to avoid crashing with a third ship. The tankers were so vast that without a spare mile to manoeuvre in it was impossible to avoid a collision. Despite attempts to change course, and the stopping of her engines, the bow of Allegro bow ploughed into Pacific Glory's side. Allegro continued to Fawley near Southampton, where she was placed under arrest.

Pacific Glory then drifted slowly towards Ventnor - the collision had cut through the fuel pipes to her engine room. At 10.30 the escaping fuel exploded, killing five in an 80-foot sheet of flame that spread through the decks and caused further explosions. Oil began leaking from the starboard side of the ship, igniting on the sea below. The remaining crew abandoned ship by jumping into the sea; many were burnt in the fires over the waves. By this time 13 men had perished.

At 11pm the fiery inferno was three miles off Ventnor as fire-fighting tugs from Fawley arrived on the scene, along with Royal Navy ships, the Island's lifeboats, hovercraft, and helicopters, all taking part in 'Operation Solfire'. The 29 survivors were rushed to Haslar Naval Hospital suffering from severe burns and ingestion of oil. During the night the tugs managed to put out the fire on the sea, and struggled to put out the fire on board.

Pacific Glory was then guided to Sandown Bay by several tugs, hoping to ground her in the Nab Shoal near the Nab Tower as her stern began to sink beneath the waves.

But fire broke out again, a thick cloud of smoke rose several miles high, and the ship was abandoned one mile off Dunnose Point. Sandown Bay, the busiest on the Island with its five miles of pure, golden sand, was in danger. 500 men gathered on the bay armed with 8,000 gallons of detergent, with the coastguard and RSPCA patrolling the beaches. Oil slicks began pouring from Pacific Glory, but fortunately ships spraying detergent near the wreck prevented them from conglomerating and threatening the shore. The firemen on board fought the blaze all through Saturday and Sunday, and by Sunday afternoon it seemed the danger had passed.

When everyone was beginning to feel relief, a new danger arose when the wind rose to a Force 8 gale. One of the ships near the wreck, Beaulieu, containing 40 reporters, almost went down, and was saved only by HMS Zulu. The tug Harry Sharman was forced by the gale straight into the base of Culver Cliff1. Despite this, Pacific Glory remained in one piece, and on Monday morning newspaper headlines declared her 'The Ship That Would Not Die'.

That morning, members of the Portsmouth Fire Brigade boarded her and finally extinguished the fire. The ship was then handed over to a salvage team, and from Thursday the oil was pumped out into smaller tankers alongside.

The biggest danger to the Island's shores was over.

Although the events of MV Nisha's sojourn in Isle of Wight waters fortunately did not involve the danger of a shipwreck, they have worrying implications for the future.

On 21 December 2001 MV Nisha, a 500ft ship owned by the Great Eastern Shipping Company, was carrying 26,000 tonnes of raw sugar to the Tate & Lyle sugar refinery at Silvertown, east London, due to arrive the next day.

At 8am she was intercepted in international waters off the Sussex coast by a Type 23 frigate, HMS Sutherland, which continued to escort her until 22 December. She was boarded by the Royal Navy and the Anti-Terrorist Branch of the Metropolitan Police in a joint security operation with the Royal Navy and Customs. They believed that 'bin Laden-related terrorist material' was on board; rumours suggested that anthrax was one of the suspected possibilities. The ship had sailed from Mauritius, and had stopped in Djibouti, next to Somalia, which has links with Osama bin Laden's al-Qaeda terrorist network.

After the first search of the vessel discovered nothing, she was taken to a position in Sandown Bay, half a mile off the Isle of Wight, for a second search, which lasted several days. The press reported that a Scotland Yard spokesman said, 'A full security search of the ship has been completed and no noxious or dangerous substances have been found aboard the vessel'.

Fortunately no dangerous substances were found in the end, but it does go to show that, in the modern age, not all cargoes carried by ships would automatically be welcomed to the Island's shores.

1Many believed that this was a deliberate insurance scam.