The Grackle: Gregarious Neighbour Content from the guide to life, the universe and everything 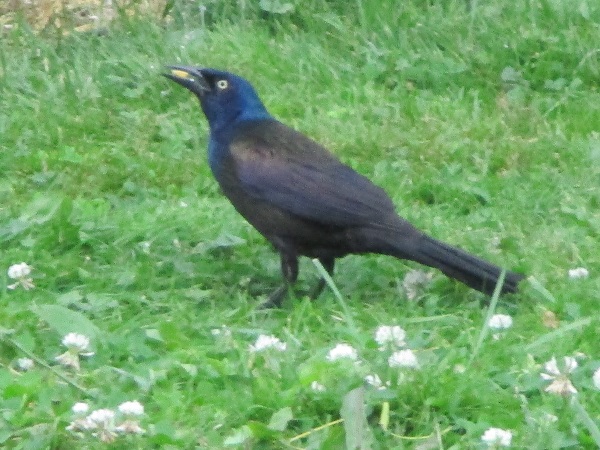 It's a biggish bird. It struts around your yard, bullying the smaller birds. It knows it's descended from dinosaurs. It's noisy. The bird in the photo is a Common Grackle. There are other grackles: the genus Quiscalus includes Great-Tailed and Boat-Tailed grackles. Together, they make up a numerous mob of birds that infest... er, enliven the scene in North America. People love them or hate them. Let us tell you why.

The historical account of Aztec Emperor Auitztol’s introduction of the great-tailed grackle Quiscalus mexicanus into the Valley of Mexico (1486–1502) is significant because it documents human translocation of wild birds in Mexico over 500 years ago, before the Spanish Conquest of that land.
– Paul D Haemig, 'Aztec introduction of the great-tailed grackle in ancient Mesoamerica: Formal defense of the Sahaguntine historical account', NeoBiota 22: 59-75, 26 June, 2014

That's the science story: Quiscalus mexicanus was imported by the Aztec emperor. It did really well, because grackles of all varieties like living in town. They don't mind people at all, although people often mind them. A legend has grown up about the noisy bird's call. According to the legend, Zanate, the Great-Tailed Grackle, stole the seven notes of its call from the sea turtle, leaving the poor turtles without a voice. The notes stand for Love, Hate, Fear, Courage, Joy, Sadness and Anger: the passions of life.

The local story, at least in Texas, is that Great-Tailed Grackles show up in intimidating numbers. Youtubers make fatuous references to Hitchcock while filming from the safety of their cars. A listener-supported radio station in Austin gives out grackle-decorated socks as premiums for contributors. The local university campus is full of the outgoing birds. Anyone who speculates that the Great-Tailed Grackle is revenge for the Mexican-American War is welcome to do so, although probably not in Texas.

As you might expect, the Great-Tailed Grackle is not endangered. There are about 10 million of them. Walmart shoppers claim most of them are in the parking lot. Their habitat stretches all the way down to the northwestern coast of South America.

The Boat-Tailed Grackle, Quiscalus major, likes to hang around water. Wetlands are its thing. It hangs around and calls loudly during mating season. Like all grackles, it has iridescent feathers that look black at a distance but reveal their colours close up. Also like other grackles, it has a disproportionately long and showy tail.

Boat-Tailed Grackles live along the Gulf Coast and eastern coastline of the United States as far north as Maine, where they annoy birdwatchers who would prefer to attract smaller, prettier songbirds. Grackles don't care. The Gulf Coast habitat means they also show up to irritate Texans.

Many people in the US mistake the Common Grackle (Quiscalus quiscula) for a crow, but they aren't even remotely related to American corvids such as bluejays. Cornell's bird lab describes grackles as 'lanky'. They have long legs, and all species have ridiculously long tails. When they fly, you notice that the long tails make their wings look short. At a distance, they look black. Up close, you see the iridescent blue head and brown body.

Common Grackles are about the same size as a Mourning Dove or American Robin (which is a thrush). Here are their measurements:

Grackles will eat anything. They're omnivores. They'll eat insects and even the occasional smaller bird. But they really, really love maize. Farmers really, really hate grackles – especially because they like to travel in such huge numbers. Many farmers have taken to spraying maize sprouts with chemicals that taste bad to grackles. Others just go after the grackles. This hasn't made much impact on the grackle population, though it probably relieves the farmers' feelings somewhat. Grackles can have a negative impact on agribusiness.

Grackles don't like parasites. For this reason, you'll see them spread their wings out and lie low in the dust while ants crawl all over them. This is called 'anting'. The ants secrete formic acid: natural mite repellent. Grackles will also roll around in walnut juice, lemons and limes, marigold blossoms, chokecherries, and mothballs for the same reason. No, they aren't corvids. But they're clever.

Grackles live all year in the US Southeast, Midwest, and Northeast. They'll go as far as Canada to breed. Females choose the nesting sites, usually high up in a conifer. They have been known to nest in unusual places, such as Osprey nests still in use (!) and even the occasional birdhouse. They'll have one or two broods a year of from one to seven eggs. Incubation takes 11-15 days and nestlings stay in the nest from 10 to 17 days.

Common Grackles are still common: there are about 61 million of them. But between 1966 and 2014, their population decreased by about 2% every year. Environmentalists give them an 8 out of 20 on the Continental Concern Score, and they are listed as a Common Bird in Steep Decline. (So stop being a bird snob and feed them, already.)