Damnatio memoriae: Cancel Culture Through the Millennia Content from the guide to life, the universe and everything 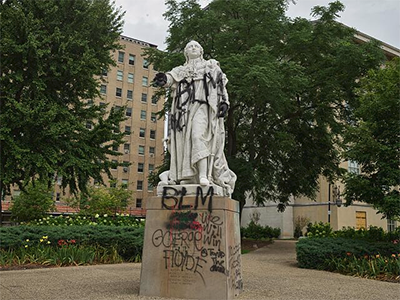 If you know who the 'Last Guy' is, then you've been paying attention to your contemporary history. But Colbert's refusal to name the former US president has an ancient tradition, going back at least a few thousand years. It even has a fancy Latin name: damnatio memoriae, a term coined in the 17th Century. Sometimes, public opinion against a famous – or, more likely, infamous – person is so strong that everybody decides to pretend they were never there. They are erased from historical memory. It's the ultimate form of 'cancellation'.

At least, that's the theory. If we know the names of those who were 'erased', how effective was the procedure, anyway? We could argue that damnatio memoriae might have worked, sometimes: when we don't know anything about the cancelled person. Here's a short list of some of the people who have been more-or-less victims of 'cancel culture' in the past.

It's kind of hard to tell if damnatio memoriae was practised before ancient Egypt. Earlier civilisations have tended to erase themselves. The Harappan civilisation of the Indus Valley (2500–1700 BCE), for example, left their records in a script nobody has managed to understand yet. They may be saying 'Emperor So-and-So is a rotten egg,' but there's no way to tell.

We do know that the Egyptians were determined to control their public record. One way we know this is because, to an Egyptian, erasure usually required a chisel. We can tell that some of those steles have been re-inscribed with 'alternative facts'.

Ancient Egyptians were firm believers in an afterlife, which looked like Egypt, only better. They believed they could communicate with that afterlife to a certain extent. They often wrote letters to their dead relatives and left them in cemeteries on holidays. (You didn't get out of remembering Mother's Day after Mom had passed away.) They also believed they could affect that afterlife by what they chose to remember. If they really hated someone, they'd pursue them into the afterlife by writing curses on red vases. By pulverising the cursed vase, it was hoped, they could destroy the enemy's spirit in the next world.

We don't know how many unpopular political figures got cancelled in the afterlife, but we do know what happened to one pharaoh the priests didn't like. According to them, Akhenaten was a heretic for trying to institute premature monotheism. So they cancelled him – with extreme prejudice and stone-working tools. They removed his facial features from statues1. They struck his name from lists of pharaohs. Obviously, they were not completely successful: Egyptologists have ferreted out his existence. Sigmund Freud suspected the elusive monarch of inspiring the Exodus. Moral: do a better job of erasure, or don't write everything in stone in the first place.

In the 4th Century BCE, an arsonist burnt down the temple of Artemis in Ephesus. He did this in order to be famous – and he succeeded, in spite of a law that forbade people from mentioning his name. Mind you, we don't know anything else about him, just that he burnt down a famous building in order to be remembered.

Ancient Romans and Other Italians

Like the Egyptians, the Romans were worried that they would disappear from the afterlife if people forgot about them. For this reason, rich people commissioned busts and statues of themselves, and expected their descendants to pay attention to their memories. In fact, that was a big part of what 'Roman piety' meant: making a religion out of your family. This sort of thing obviously came with a property requirement: slaves and foreigners didn't count.

Romans could be rigorous in expressing their posthumous hatred of public figures. The bizarre emperor Caligula was so disliked that his statues had their facial features gouged out before being thrown in the Tiber. They really didn't want to encounter this guy in the next world.

Even during the Italian Renaissance, people tried to erase the memories of their political opponents – or, failing that, to smear their reputations. Losers in the Renaissance edition of Game of Thrones were often publicly dismembered. Their elaborate villas were pulled down. At least one was even publicly cannibalised.

During the era of Communism in Eastern Europe, statues of Marx, Lenin, and Stalin were ubiquitous. Where are they now? At the bottom of the Baltic Sea. Abandoned in fields. In Grutas Park in Vilnius, Lithuania, a sculpture garden that features leftover Soviet-era relics – it's a fee-charging theme park with cafes, and it won the Ig Nobel Peace Prize in 2001.

In the 21st Century, video footage of dictators' statues falling has become a familiar meme. More controversially, so has the toppling of statues to historical figures once revered and now reviled. One answer to the question 'Why does it matter if the statues stay up?' might be, 'We don't want them hanging around in the afterlife – or our history books.'

Does damnatio memoriae work? Ask the Tudors. They managed to convince everyone that Richard III was a villain, with a little help from Shakespeare. Historians are only beginning to set the record straight since his body was dug up in a car park.

Ultimately, though, what the future thinks of today's political leaders, no matter how (un)statesmanlike, (in)competent, or (dis)liked, will depend on two things: the availability of information and the personal preferences of historians. Napoleon can be viewed as a visionary, a dictator, or the symbol of grandiose delusions. Churchill can be seen as friend, foe, or overhyped. The future will make its own assessment – probably in spite of all our attempts to bury the evidence.

I'm excited for future historians to try and make sense of 2020-2022 solely through memes and tik tok as the cultural artifacts of our time.
– jeni kang p on Twitter

1A statue of one of his successors, Ramesses II who reigned 60 years later, inspired Percy Shelley's classic 1818 poem Ozymandias, 'Look on my works, ye Mighty, and despair!'.