Harriet Tubman: Conductor on the Underground Railroad Content from the guide to life, the universe and everything 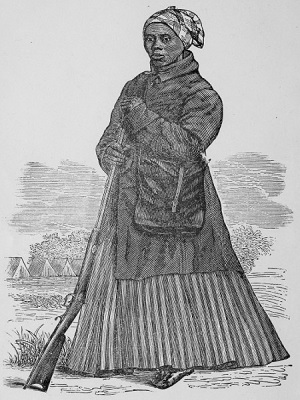 When I found that I had crossed that line, I looked down at my hands to see if I was the same person.
– Harriet Tubman, about reaching free territory

In January 2021, the Biden administration promised to expedite the issue of $20 bills bearing the likeness of Harriet Tubman. If and when this happens, the USA will be honouring a resistance fighter in the war against slavery. As a conductor on the Underground Railroad, she led at least 70 people to freedom, mostly friends and family, at great personal risk. She also created a legend.

Harriet Tubman didn't write her own story: she couldn't read or write. Myths have grown up around her life. Here, we will set down the facts as we know them.

Harriet Tubman was born Araminta Ross, in Dorchester County, Maryland, in the early 1820s. Her parents were enslaved, so that became her 'condition', too. As a child, 'Minty' suffered abuse from slaveholders, being beaten by the woman of the house for unskilful housecleaning or allowing the baby to cry. When she was 13, a white overseer threw a two-pound weight at a slave who was attempting to flee. The weight missed the man but hit Minty, cracking open her skull. For the rest of her life, she suffered from narcoleptic seizures, migraines, and other symptoms of traumatic brain injury.

Minty determined to avoid working in the 'big house' in order to stay away from the abusive slaveholders. Instead, she did outdoor work, keeping up with strong men in her ability to drive oxen, plough, and haul and split logs. She showed remarkable stamina for a five-foot (152cm) person with a history of physical abuse.

Around 1844, Minty Ross married John Tubman, a free Black man. She changed her name to Harriet Ross Tubman. In 1849, Harriet became ill. Because illness reduced her monetary value to the slaveholder, he tried (unsuccessfully) to sell her. Faced with the possibility of being separated from her family in Maryland anyway, Harriet decided to flee.

In September of 1849, she attempted to escape with her brothers – but her brothers, discouraged, turned back, persuading her to return with them. Shortly after that, she struck out on her own - her husband, a free man, refused to leave his home and work to go with her1. With the help of the Underground Railroad – a loosely-organised resistance made up of free Black people and white Abolitionists – Harriet made the 90-mile trek through Delaware and into Pennsylvania. She was free, but her family remained behind in slavery.

Harriet found friends in the North. Often, they were Friends, also called Quakers. One of these was Abolitionist and women's suffragist Lucretia Mott. Harriet moved to Auburn, New York. She became friends with Lucretia's sister Martha Wright and through her, Frances Seward, the wife of the future Secretary of State under Abraham Lincoln. Frances Seward was a determined and intellectual woman who did all she could to help the causes of Abolition and women's suffrage2. Owning her own property, thanks to a recently-passed New York state law called the Married Women's Property Act3, Frances sold Harriet Tubman a house she'd inherited from her father. She would have given it to her outright, but Harriet insisted on buying it at $25 down and $10 a quarter.

Harriet didn't stay up North long. Instead, she headed back into Maryland, again and again, to rescue her family members and others. She used the resources of the Underground Railroad, especially people like Quaker Thomas Garrett of Wilmington, Delaware, who helped over 2,000 people get their freedom. He did this in spite of the fact that it was illegal. If caught, he could have been imprisoned and lost his property.

The Underground Railroad wasn't a real railroad. It was a metaphor for the antislavery resistance. Slave-catchers, who couldn't figure out how their quarry managed to disappear, likened the movement to a vast underground railway system. Railways were new in the 1840s and 1850s. Harriet Tubman became a 'conductor' on the Underground Railroad. She later boasted justifiably that, unlike most conductors on the steam railways, she never went off the track and never lost a passenger. It's true she never lost a passenger, though she occasionally had to threaten a frightened escapee into going on. People called her 'Moses'. She referred to the slave South as 'Egypt'. That metaphor fit, too.

In 1850, Congress passed the Fugitive Slave Act. This law made it possible for slaveholders to pursue fugitives into the free states and return them to slavery. The federal law outraged many people in northern states: sometimes, mobs formed around such attempts at returning fugitives, and slave-catchers were threatened with violence. In northern towns and cities, fugitive slaves were often helped to escape in the confusion. Harriet was involved in one such operation in Troy, New York, in the spring of 1860. Quick thinking on her part, and the help of friendly Abolitionists, led to the escape of Charles Nelle.

After the Fugitive Slave Act was passed, Harriet took her passengers all the way to Canada. As they crossed the bridge, she invited them to admire Niagara Falls. Then they sang songs of freedom, like ' Glory to God and Jesus too, one more soul got safe.' Canada might be cold, and far from anything they had ever known. But here, they were free.

Civil War and After

Harriet settled her parents in her home in Auburn, New York, but she didn't stay there. The American Civil War had begun. Harriet headed south again, this time to nurse soldiers and serve as a scout. She combated dysentery among the troops, supported herself by selling homemade gingerbread and root beer, and incidentally became the first woman to lead an armed assault in the Civil War. This was in 1863, when Union troops raided the Combahee River plantations of South Carolina, gaining needed supplies for the troops and liberating 750 slaves.

After the war, Harriet settled in Auburn again with her family. She remarried, to a Black Union Army veteran, Nelson Davis. They adopted a daughter. Never well-off, Harriet took in boarders and worked various jobs to support her elderly parents and to help the poor. Friends raised money to help her: Abolitionist Sarah Bradford wrote books about her so that she could have the proceeds. Attempts to get the government to issue her a veteran's pension for her war service were unsuccessful, but she was finally awarded two pensions: one as the widow of her soldier husband, and one for her service as a nurse.

In the 1890s, Harriet underwent brain surgery to relieve pressure from her old injury – without anaesthetic. Always more interested in providing help for others rather than herself, she donated some of her own property to be used as a home for the aged. She died in that home in 1913.

Harriet Tubman's white friends often expressed some embarrassment about her deep spirituality. Even Quaker Thomas Garrett was puzzled by her insistence that the Holy Spirit guided her actions. She attributed the fact that she was never caught in her Underground Railroad activities to an inner voice that told her where to go and what to do. Twice, she came to Garrett with the announcement that he had money for her. Both times, this was true: he had received donations in her name, but he was at a loss to explain how she knew that. She replied that the Lord told her.

The brain injury that caused her to fall into sleeping spells and have migraines may also have contributed to the visions Harriet had throughout her life. Her biographer, Sarah Bradford, was reluctant to talk about them. But she included a letter from FB Sanborn, Secretary of the Massachusetts State Board of Charities, that said: 'Her dreams and visions, misgivings and forewarnings, ought not to be omitted in any life of her...' In someone with higher social standing, such visions might have been considered evidence of sainthood.

There have been works of art, books, and musical compositions dedicated to Harriet Tubman. There have been plays and operas. Cicely Tyson played her in a television miniseries in 1978 and Alfre Woodard in 1994 in Race to Freedom: The Underground Railroad. In 2019, British actress Cynthia Erivo portrayed her in the successful film Harriet. But the best way to learn more about Harriet Tubman is probably to read the oldest books about her.

Sarah Bradford's two biographies of Harriet Tubman were written mostly to raise money to help her friend. Mrs Bradford was a white Abolitionist lady and very much of her time and place. Potential readers are warned: some of the language in these books may be disturbing. Abolitionist descriptions of the 'horrors of slavery' can be sensationalist and even border on the pornographic. Abolitionist writers can show racism that they probably weren't aware they had. There is also an unfortunate tendency to try to render the speech of Black people in 'dialect'. This sounds offensive to 21st-Century ears. Mrs Bradford feels the need to apologise for the humble status of 'our sable friend'. But she is also insistent that these 'as-told-to' books are as true as she can make them.

For the satisfaction of the incredulous (and there will naturally be many such, when so strange a tale is repeated to them), I will here state that so far as it has been possible, I have received corroboration of every incident related to me by my heroic friend. I did this for the satisfaction of others, not for my own. No one can hear Harriet talk, and not believe every word she says. As Mr. Sanborn says of her, 'she is too real a person, not to be true.'

Keeping this in mind, the closest we may come to hearing Harriet Tubman's own version of events can be found in these books, both courtesy of Project Gutenberg.

A remarkably good dramatisation from 1965 can be found at Go Down Moses: Harriet Tubman and the Underground Railroad. This version, produced by John Houseman, stars Ruby Dee, Ossie Davis, and Brock Peters.

1Later, when she returned, Harriet found him married to another woman.2When Frances Seward flatly refused to throw any more Washington dinner parties for her politicking husband, the frustrated Seward cajoled his daughter-in-law into serving as his 'hostess'. The politics of the day demanded a party planner in hoop skirts, but Frances was not that woman.3Ending a long struggle to allow married women to keep control of the property they brought into a marriage.