'Dirk Gently's Holistic Detective Agency' - the BBC America Television Series Content from the guide to life, the universe and everything 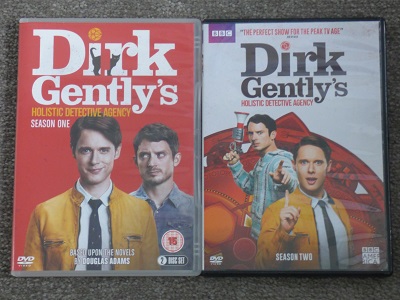 As a reader of h2g2.com, you may be familiar with the Dirk Gently novels written by our founder Douglas Adams. You may also know that the novels inspired a miniseries that was made by the BBC and broadcast in 2010-121. The novels again received a small-screen treatment in 2016-17 in two series produced by BBC America in association with Netflix.

The series could perhaps be viewed as a prequel to the novels, as it features a young, smartly dressed Dirk Gently rather than a man who was 'rounder than the average undergraduate and wore more hats [and] a large and flappy leather coat'. An old brown car reminiscent of Dirk's car in the 2010 series features, but as the car of another character - in this series Dirk drives a Chevy Corvette sports car. And the Holistic Detective Agency itself is officially opened only at the end of the second season.

As with the original novels, the series crams a lot into the plots - themes include time travel, body-swapping, vampires and even magic. And of course Dirk solves the mysteries using his powers of detecting the fundamental 'interconnectedness of all things'. Fans of the 2010 BBC miniseries (rated 12 in the UK) should be warned that this series is rated 15 - it contains violence from the outset. Guns feature very prominently, alongside other mysterious, but no less deadly, weapons.

The plots are unfolded as the series progresses and clues are gradually revealed. The end of the first season is a taster of events in the second. The end of the second season ties up all the loose ends, but still leaves the door open to a third season, as the characters learn 'reality is broken'. However, although the series gained a cult following, viewing figures were not strong enough for a third series to be commissioned.

Dirk Gently is a 'holistic detective'. He has been working on his own, but finds he values friendship. However, he comes to feel a responsibility towards his friends that means he worries about putting them in danger. His fears have the potential to jeopardise the cases they are working on. Dirk is played by Samuel Barnett, an actor from Whitby in the UK. Before he took the role of Dirk, he had various roles in UK TV series and played one of the History Boys in the 2006 film of that name.

Todd Brotzman is working as a bellboy in a hotel when a murder is committed there. He is reluctantly drawn into Dirk Gently's attempts to solve the case. At first the detective is an irritation to him, but eventually they become friends. Todd is played by Elijah Wood, whose most famous role is Frodo Baggins the Hobbit in the Lord of the Rings series of films. He was born in Cedar Rapids, Iowa, USA.

Amanda Brotzman is Todd's sister. She has 'pararibulitis', which causes her to hallucinate horrific injuries, such as stab wounds or being set on fire. The 'Rowdy Three' gang of energy vampires help her to manage the condition by feeding off her emotions. She is played by actor, writer and director Hannah Marks.

Farah Black wanted to work in law enforcement like other members of her family, but instead works as a bodyguard for a millionaire, Patrick Spring, and his daughter Lydia. When Patrick is murdered and Lydia goes missing, Farah encounters Dirk Gently, who had been hired by Patrick to solve the case. She is played by Jade Eshete, an actor, writer and producer.

Bart Curlish, played by Fiona Dourif, is a 'holistic assassin' - like Dirk she tunes into the needs of the universe but, instead of making connections, she kills people. One person she does not kill is Ken (Mpho Koaho) - he is afraid of her at first, but she needs him. They eventually become friends as Ken shows Bart there is more to life than just killing people.

Although the plots are only loosely inspired by Douglas Adams' originals, the episodes are entertaining. Samuel Barnett is likeable as Dirk Gently, the outwardly-confident, but also insecure, detective who is unsure of the extent of his powers. Elijah Wood is well cast as Todd - he watches events wide-eyed while he tries to work out what is happening, but comes to embrace the concept of 'the interconnectedness of all things'.

In this Researcher's opinion, the first season was cleverly done, as the audience was introduced to clues only when Todd and Dirk discovered them. However, it was not always easy to follow events, or to work out who was who when time travel and body-swapping were involved. The second season was more engaging, as it featured subplots as well as the main case of Dirk being tasked to 'Find the boy'. The audience sees inside the Blackwing secret government research facility, and gets to visit the fantasy world of Wendimoor. In Wendimoor there is a Romeo-and-Juliet-esque problem with feuding families - two princes, Silas Dengdamor and Panto Trost, fall in love and try to bring their families together to end the war that is destroying the world. And of course, in the end, everything is connected.

1 This was the first ever drama series commissioned for BBC Four, although due to budgeting issues only one series was made.