Leicester City Football Club - Premier League Champions 2015-16 and FA Cup Winners 2021 Content from the guide to life, the universe and everything 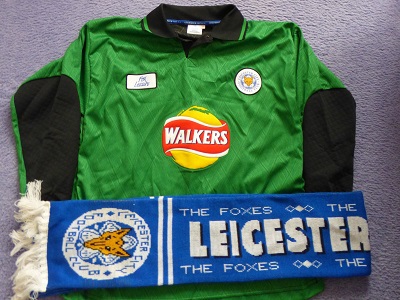 Leicester Fosse Football Club was founded in 1884 by a group of amateur footballers. Initially the group arranged friendly matches against other local teams. However, by 1887 so many local lads1 were interested in playing the game, the Leicestershire Football Association was founded and a Challenge Cup Competition was established. Leicester Fosse, nicknamed The Fossils, entered the competition but lost in the second round.

England's Football League was founded in 1888 but Leicester Fosse were not one of the 12 clubs selected for its first season. That year Leicester Fosse recruited their first professional footballer, Harry Webb, and paid him 2s 6d per week. Leicester Fosse won the Leicester Senior Cup in 1890 and 1891 and joined the Midland League in May 1891. They entered the FA Cup but lost in the first round.

Leicester Fosse were elected to the Second Division of the Football League in 1894.

The 1897/8 season was turbulent for the Club. Money was raised by holding baseball games, athletics events and even a bazaar and Leicester Fosse became a Limited Company. Two players were selected to play for the Wales national team and the Club finished third in the Second Division. However, a number of players were expelled for bad behaviour. New players were brought in, but the Football Association investigated the deals. As a result, the chairman and a director resigned, the secretary was suspended and the Club had to pay a fine.

The team was depleted in 1903 - as well as some players encountering the usual footballing injuries (including broken bones), their striker caught typhoid fever. The trainer added himself to the team for one match and scored the goal that won the game and saved the Club from having to apply for re-election to the Second Division. They did have to apply in 1903/04 when they finished bottom of the Second Division, but were successfully re-elected.

Leicester Fosse were promoted to the First Division in 1908, but returned to the Second Division in 1909. The team suffered a record 12-0 defeat in a match after celebrating a former team-mate's wedding the night before and experiencing a 'collective hangover', as the report of the subsequent investigation put it.

The Football Leagues were suspended during the Great War, but local friendly matches took place when footballers were home on leave from the armed forces. Matches between retired players also took place, and teams could borrow players from other clubs if necessary to make up a team of 11.

As well as experiencing ups and downs in the Football League, the Club's financial fortunes also varied. 1911/12 had been a difficult season - players had to be sold, amateur players were recruited to keep the wage bill low, and the Club even had to ask for donations from supporters. However, in 1919 the Club had no way to repay a debt of £3,150 so it went into liquidation.

The Club was taken over by a new Board of Directors and was named Leicester City FC in honour of Leicester having been granted City status in June 1919. LCFC gained its new nickname, 'The Foxes', in 1922.

More ups and downs in the Football League ensued. The team won the Second Division in 1924/25 and was promoted to the First Division again. They secured a record win of 10-0 over Portsmouth in 1928 - Arthur Chandler scored a double hat trick (six goals). In 1934 LCFC reached the FA Cup Semi Final but were relegated to the Second Division. They secured promotion again in 1936/37 but were relegated again in 1938/39.

The Football Leagues were suspended during the Second World War but LCFC played in regional competitions - they won the Southern Section in the 1941/42 season.

In the 1948/49 season, LCFC reached the FA Cup Final but were beaten 3-1 by Wolverhampton Wanderers at Wembley Stadium. In the League, they only just avoided going down to the Third Division, finishing 19th out of 22.

In the 1958/59 season they were on course to go down as they had won only two of the first ten games, but goalkeeper  Gordon Banks was brought in - he would go on to become a member of the 1966 World Cup-winning England team. With him as a safe pair of hands in goal, the team finished the season one point above the relegation zone.

In the 1965/66 season, 16-year-old goalkeeper Peter Shilton made his debut as deputy for Gordon Banks - he would also become an England team member.

On 1 January, 1979, the 18-year-old Leicester-born striker Gary Lineker made his debut for LCFC. He would go on to become the winner of the Golden Boot for the top goalscorer in the 1986 World Cup and a winner of the FIFA Fair Play Award (as he never received a Yellow or Red Card during his career). He later became a potato crisp advertiser and a TV football pundit.

1995-2000 was a period of stability under manager Martin O'Neill - they hovered around the middle of the Premier League Table, and LCFC won the League Cup in 1999/2000 against the Wirral-based team Tranmere Rovers.

Martin O'Neill moved on in 2000 and LCFC were relegated to Division One in 2001/02. The club went into administration again in 2002, but was purchased by Gary Lineker and a consortium. LCFC returned to the Premier League in 2002/03, but were relegated at the end of the season to Division One (now known as the Championship). In 2007/08 the team was relegated again, to League One (the Third Division as was).

During the campaign, striker Jamie Vardy scored goals in 11 consecutive games, breaking the previous record of 10. He scored 24 goals in total that year and won the Premier League Player of the Season award. Second-highest goalscorer Riyad Mahrez (with 18 goals to his name) was given the Professional Footballers' Association Men's Player of the Year Award. Claudio Ranieri was named Premier League Manager of the Season.

Leicester Fosse played in various places in the early years, including Leicester's racecourse and cricket ground. On 7 November, 1891, they played their first match at Filbert Street, which would be the home of the Club until 2002 when a new stadium was built a short distance away. Originally known as the Walkers Stadium after its crisp-manufacturing sponsor, it was renamed the King Power Stadium in 2011 after the Thai company whose CEO, Vichai Srivaddhanaprabha, had become Chairman of the Club.

As well as the downsides of life on the pitch, the Club has experienced some sadness off the pitch. One player, Harry Thorpe, died in March 1909 of influenza. In the 1910/11 season, a new player, Ted 'Cock' Pheasant, died of peritonitis at the age of 33. Eight players left the club to go to war and did not return. And notably in the 21st Century, Vichai Srivaddhanaprabha and two of his staff members were killed in a helicopter crash outside the King Power Stadium after the match on 27 October, 2018, - Srivaddhanaprabha was succeeded as Chairman of LCFC by his son Aiyawatt.

Given the past history of Leicester City Football Club, it is likely that the Club will continue to experience ups and downs in future, but for its fans it will still be a team that is worth watching.

1Leicester City Ladies FC was only founded in 1966, and Leicester City Women FC, the official team affiliated to LCFC, was founded in 2004.2They would only be allowed from the 1965/66 season onwards.3A competition that had been established in the 1960/61 season.