Injuries From Casual Football Content from the guide to life, the universe and everything 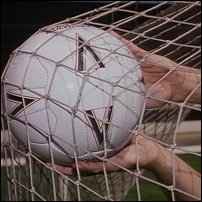 Picture the scene: you're at a match, or watching one on TV, when a professional footballer goes down under a tackle. He rolls around in agony, face contorted. All around you, people are chuntering from the sofa or shouting from the opposing fans' part of the ground things like 'get up', or calling into doubt the player's masculinity or sexual preferences. If you're a parks or pub team player, however, a small part of you is probably thinking actually, that really hurts!

Casual or very low-league football is played by people who are roughly the same size as professional players, but with half their co-ordination, skill and discipline. In addition, it is played on surfaces that make even New Wembley look like a bowling green1. It is not surprising, therefore, that there are a wide variety of ways to receive a painful injury. Fortunately, serious injuries are rarer than in the professional game, due to the reduced speed and commitment levels.

Anybody who has ever played football at school can probably remember the moment on a cold February morning when Big Rob tried to hoof one into the top corner of the net, and instead sent the ball smacking into the exposed fleshy part of your thigh from about a metre away. The stinging pain, the laughter of your team mates... It's all coming back now, right? You can expect no sympathy at all for this type of injury – after all, it is only a bruise. At best, your teammates will shout 'good block' and then expect you to run it off.

If you are unfortunate enough to have the ball make contact with your dangly bits (for those that have such bits) it is, of course, much more painful, but you'll still get no sympathy. Instead you might get ribald jokes about your future ability to procreate – as if this helps – and then you'll have to run it off.

Only slightly less painful than the above is the thwack in the face. As well as the possibility of broken glasses (see below), you can also have the classic nosebleed. This is one of the rare casual injuries you can't run off, so you'll just have to sit on the sidelines looking doleful and getting cold until it stops. Put your head back and pinch the bridge of your nose, like your mum always told you, or alternatively follow the current NHS guidance, which, counterintuitive as it might seem, is to lean forward.

For most casual footballers, the warm-up amounts to a gentle jog across the pitch, perhaps swinging your arms as you go, followed by a few leg stretches. For those that arrive late – and there are always one or two – you get your kit on, accompanied by a few sarcastic remarks, and then away you go. As for a warm-down, well, this more often involves intensive use of the elbow and forearm muscles than it would in a proper routine. Players in pick-up teams are not necessarily all-round athletes whose bodies are temples. For many, this is the only exercise they get.

This is unfortunate, but it means you can empathise with your Premier League idols, as hamstring, knee and ankle injuries are one thing we can all get together. Some casual players, and especially the veterans, have so many bandages on you scarcely dare to tackle them for fear that they'll unravel, then lie there, twitching on the ground. If you get this kind of knock as a casual player you've got two choices: decide that it's serious and limp away, or decide it's just a bit stiff and run it off.

Many casual players are carrying a bit of weight, and are somewhat slow and clumsy. This is the ideal combination for standing-on-toe injuries. The ball is away, but the opponent has gone through with the tackle and is compressing your toes. Modern football boots offer no protection at all on the top of the boot, so this can lead to toenails turning black and other bruises to impress your spouse with. There is no on-pitch treatment for this, so once again you'll have to run it off.

The evil twin of the above situation is when an opposing player gets to the ball first, and tries to boot it into touch, or makes some similar form of energetic leg movement. If the top of your foot connects with their studs, this leads to painful bruising; if you kick fresh air, you can easily twang a muscle. It's embarrassing and it's your own fault, so you'd best run it off.

A sub-category of this kind of clumsiness is the shin-on-shin. Most casual players can afford shin pads, but a lot of five-a-side players don't wear them. When you get a shin-on-shin, however, you understand why they're an obligatory part of the FA's2 kit list. A more fleshy contact can lead to that ultimate schoolboy favourite, the 'dead leg'. This is the worst one to run off; while you're doing so, you're generally limping at about 2mph, making you about as useful as a toaster in the bath.

One type of player that you only see in casual football is the one that doesn't want to tackle; sometimes they just sort of 'dangle their leg in the way', hoping to avoid the ball whilst not looking like a coward. This is a very bad idea: contact with an unweighted leg like that can lead to some bad sprains for the fainthearted player.

No, not your leg: even in proper football, actual bones aren't broken that often – strong things, bones. However, one peculiarity of casual football is the player with glasses. These fall off at least once a game, often at moments of high drama. Unless you're playing with utter gits, everyone will stop and shout 'mind the glasses' allowing the previously-bespectacled one to clear the danger, and then pick his specs up and run off.

This is a special form of injury, resulting either from malevolent action or overeagerness. Unfortunately, many park or pub teams have a player who prides himself on being a bit of a hard man: one who every now and then will simply scythe down a player who is through on goal. This is not funny; no-one is getting paid here and matches are frequently played on astroturf, concrete or a frozen surface. At the least, you are going to skin your knees, and elbows or hands. You now look like a school-kid again, and will have to face a school-kid dilemma: wail in pain, abuse the offending player3, or bite your lip and, yes, run it off.

A very rare sight in professional football4 is the player with hands on his hips, sucking in air... or one with a stitch because he ate his dinner too late before coming out to the match... or one with cramp after 30 minutes. The solution is obvious: stop running and hide from the ball a bit. In very casual football games you'll need to take your turn in goal, so now is the time – just watch out for the thwack.

On a Serious Note

Casual football is often played by older and less fit players. If you feel really unwell, stop and ask for help. In 2009, a middle-aged player on the pitch with this Researcher had a heart attack at the end of the game, and was dead by the time the ambulance arrived. Most casual football injuries are minor, but sometimes more care is needed.

1Since it reopened in 2007, Wembley has been severely criticised for the unevenness of its playing surface, but mostly by losing teams, it must be said.2Football Association.3Generally not a good idea. This kind of Vinny Jones wannabee is often up for a bit of fisticuffs, which itself opens up a whole new world of potential injuries.4This Researcher can only recall one example: one of the Laudrup brothers, playing for Denmark in a World Cup match in the 1990s.