The Strange Case of Joseph Haydn's Missing Skull Content from the guide to life, the universe and everything 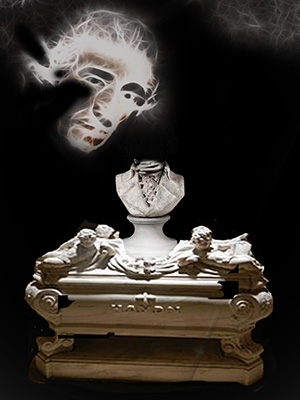 Joseph Haydn was a composer whose work was popular in its own right, as well as an inspiration for the likes of Mozart and Beethoven. He would likely have received a lavish funeral service when he died in 1809, but his Austrian countrymen were overwhelmed by Napoleon's invasion, so Haydn received a simple funeral and burial in a suburb of Vienna.

Once a person is buried, they usually stay put, but in Haydn's case this was not to be the case. Haydn had worked for the Esterházy family, and, in 1820, Nikolaus II, Prince Esterházy tried to move Haydn's remains to the Esterházy estate in Eisenstadt. Ah, but this was easier said than done. Once Haydn's crypt was opened, it became evident that someone had stolen his skull.

It later turned out that Joseph Carl Rosenbaum1, a close friend of Haydn, had bribed a gravedigger in order to make off with the composer's skull, shortly after the burial. Rosenbaum was an advocate for phrenology, a popular 'science' of the time. He believed that the shape of a person's skull was indicative of the person's talents and abilities. Inspecting Haydn's skull, he thought he saw the 'seat of hearing' (i.e. the cerebellum). Rosenbaum felt that the skull should not be left to decompose in the ground, but be kept in a special mausoleum. Rosenbaum built one in his yard.

Looking back two centuries, it is now known that just before Rosenbaum died in 1829, he gave Haydn's skull to a friend, who likewise handed it to someone else, and so on over the rest of the 19th and early 20th Centuries. Eminent doctors and pathologists and their families kept the skull, until finally one of the recipients decided to just donate it to the Gesellschaft der Musikfreunde in Vienna.

Finally, in 1954, there was a ceremony at the Musikverein. The skull was put on display in a lavishly decorated urn. A procession of 100 cars drove past Haydn's birthplace in Rohrau and thence to the church in Eisenstadt, where the skull was finally reconnected with its body. So what if the ersatz skull formerly included in the burial chamber was also there? Aren't two heads better than one?

1It is true that Johann Nepomuk Peter aided and abetted Rosenbaum, but Rosenbaum seems to have been the chief instigator of the plan.