Three of the Largest Coin Hoards Found in the UK Content from the guide to life, the universe and everything 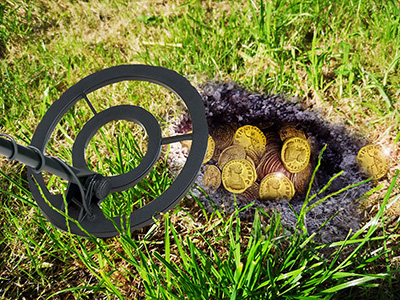 From time to time, we hear stories of people who discovered buried treasures all over the world. The UK isn't an exception. Many historical precious coins have been unearthed in this country. This Entry is an introduction to three of the largest coin hoards ever found in the UK.

The Seaton Hoard is the largest one on this list. It was discovered in November 2013 and is composed of more than 22,000 Roman coins (22,888 to be precise!). The oldest coins in the collection were minted in AD 260, and the youngest ones in AD 348. Some of these coins were specially issued to celebrate the foundation of Constantinople in AD 332. These coins were buried since then until they were discovered by Laurence Egerton when he was metal detecting in Seaton, Devon.

A group of archaeologists excavated the hoard. It was so large that the experts at the British Museum needed ten months to clean, examine and catalogue the coins. The collection is currently displayed at the Royal Albert Memorial Museum - the Museum purchased it for more than £100,000.

The Leominster Hoard is composed of 518 coins and is displayed at the Stockton Bury Gardens in Kimbolton, near Leominster in Herefordshire. It was found by two detectorists in June 2015. The coins were placed inside three pouches that were stuffed with leaves. Coin experts said that they were minted in AD 270. At this time, the Roman Empire was collapsing and the situation was unstable. This explains the presence of leaves with the coins: the owner wanted to suppress the sound made by the coins when he was transporting them.

The British Museum declared this find a treasure. According to the Treasure Act, a committee of coin experts has to estimate the value of the hoard and a coroner decides the reward that will be split between the finders and the owner of the land where the treasure was found. In addition to the Treasure Act, the detectorist should abide by the metal detecting code of conduct.

On 21 December, 2014, in Lenborough, Buckinghamshire, Paul Coleman discovered a hoard of 5,248 Anglo-Saxon coins with his metal detector. The lucky detectorist reported his find to the authorities. One of the experts was stunned when he received an e-mail telling him that someone found more than 5,000 historical coins. He thought it was a typo - maybe the sender meant 50 or 500... 5,000 is jaw-dropping!

The British Museum examined the hoard. They said the coins are 1,000 years old. This why they are super valuable despite containing only 10% silver. The coins were minted in different locations during the reign of two kings: Ethelred the Unready (978–1013, 1014–1016) and Cnut (1016–1035). This find was declared a treasure with an estimated value that exceeds £1 million. The reward will be split between Paul and the landowner.