Landmark Court Decision: How Many Cats Should You Have in Your Car? Content from the guide to life, the universe and everything 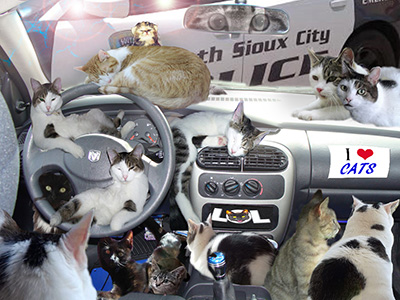 In answer to the no-doubt common question children ask their parents, namely, 'Why should I study law?', here are two possible answers:

To clear up any misunderstanding, let it be made clear that in the landmark case1 of State of South Dakota v Fifteen Impounded Cats, the case was one of jurisdictio in rem. In rem cases are titled according to the material (ie, non-human) objects in question, in this case, cats, rather than the names of the people involved. Now that you've had a bit of free legal instruction, we can move on.

The Facts in the Case

At 11.15pm on 13 August, 2009, a policeman in Pierre, South Dakota, answered a complaint at a convenience store. It seemed a woman, Patricia Edwards by name, was parked there with a rather large number of cats aboard her Dodge Neon. When the policeman arrived, she was attempting to back out of a parking space, but almost ran into the police vehicle, possibly due to limited visibility. Inspection of the compact car revealed the presence of 15 cats, one very full litter box, and a lot of baggage – but no cat carriers.

The officer called the humane society and placed the cats with a local veterinarian. Ms Edwards explained that she was travelling the country from her home in Texas, was on her way to Billings, Montana, was short of money, and was sleeping in her car. She further explained that she had no health papers for her cats because 'the cats had destroyed those treatment records.' When the authorities refused to return her cats, Ms Edwards appealed.

There were important legal issues involved in this case, which was heard by the South Dakota State Supreme Court.

The majority decision by the court concluded that Ms Edwards' rights had not been violated, and that the officer had behaved correctly in considering the circumstances to be exigent. It said:

On the question of exigent circumstances, an objectively reasonable officer could deduce that with the cats obstructing the driver's view of the road, in their cramped and squalid accommodations, the animals were subjected to mistreatment and neglect, and their immediate safety was in jeopardy... Indeed, the owner was transient; her automobile was her temporary residence. She was passing through Pierre when she was reported at 11.15 at night. Therefore, exigent circumstances existed to immediately impound the animals for their safety. There being no error of law or clearly erroneous fact finding, the circuit court should be affirmed.
- Supreme Court of South Dakota, STATE of South Dakota, Plaintiff and Appellee, v. FIFTEEN IMPOUNDED CATS, Defendant and Appellant.

One of the two dissenting justices wrote, in contrast:

The question before this Court is not whether Ms. Edwards's cats lived in ideal conditions or whether they may receive better care elsewhere. The question is whether 'exigent circumstances' existed to allow Officer Jandt to seize the animals without a warrant or court order. That question must be answered in the negative. Ms. Edwards provided her cats with food, water, protection from the elements, adequate sanitation, and affection.
- ibid.

Because Ms Edwards couldn't pay for the care of her 15 cats at the South Dakota vet's, and because she couldn't demonstrate a safe way of taking them home to Texas, she wasn't allowed to have them back. Complex legal arguments have been advanced as to why this was fair, or not fair. Non-legal arguments have raged, as well. The position depends on whether the arguer is more worried about animal welfare, traffic safety, or the issue of cat-hoarding.

Journalists and legal experts interested in South Dakota v Fifteen Impounded Cats have hit the highlights of this case. But they seem to have overlooked the fact that, had the police in Sioux City, Iowa, acted differently a few months before, there might have been more than 15 impounded cats. The following item appeared on 10 April, 2009, in the Sioux City Journal:

Sioux City's finest – with help from animal control officers and a Union County sheriff deputy – practiced their cat-herding skills Friday afternoon after pulling over a woman driving on Interstate 29 with approximately 20 cats roaming her Dodge Neon.
Sioux City Police Sgt David Bishop said Patricia Edwards, of Garland, Texas, was pulled over just as she crossed from Iowa into South Dakota, because the sheer number of uncaged cats in the car was a driving hazard.
'She's got so many cats she can barely see out the back of the car,' Bishop said.
Things got interesting when four of the cats crawled out of the car while Edwards was standing outside the vehicle talking to police. She quickly grabbed one of the cats, but the other three made a break for it.
The chase was on...
All the cats were captured safely, Bishop said, adding Edwards wasn't cited because the rollicking felines didn't appear to be in poor health.
- Sioux City Journal, 10 April, 2009

Ms Edwards was apparently driving around the Midwest for several months, and with quite a few cats. What happened to the extra five cats in the meantime is not clear. Perhaps they found new homes in one of the towns she stayed in. We have no further word on what happened to her. We hope she found a job, a place to stay, and a cat (or two) to keep her company.

1The 2010 decision has already been cited as precedent in South Dakota.