Stuck for a No-touch Greeting? Try Spock's Vulcan Salute: Live Long, and Prosper Content from the guide to life, the universe and everything 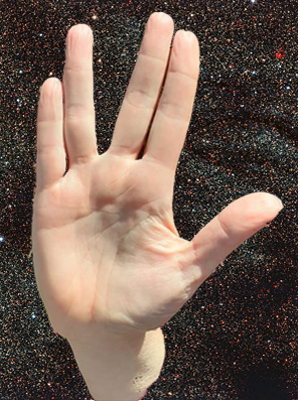 The human race are a social species, living in close proximity in their own family units. They're used to touching each other, whether shaking hands upon greeting, or hugging and kissing the more familiar. That all changed after China reported1 a novel coronavirus to the World Health Organisation on 31 December, 2019.

Later named COVID-19, this new disease spread rapidly, affecting people and their social lives as never before. The death count was staggering and a lot of people were afraid. As the virus was spread by touch, citizens were advised by their governments to social-distance. No more hand-shaking, hugging or kissing people outside their own household. Vulnerable people became hermits and many signed up to social media sites for the first time. Grandparents who were physically unable to be with their grandchildren found a modicum of solace through the medium of video calling. The pandemic was taking its toll, both physical and mental, upon those it didn't kill.

Churches, mosques, synagogues, cathedrals and temples all closed their doors to their congregations. Worshippers had to find other ways of showing their devotion to their particular deity. Candles to burn at home became a best-seller, and Christmas lights were retrieved from lofts to decorate and light up windows, as a beacon of hope. Weddings that had been in preparation for months were cancelled or postponed, although some did take place in the Church of England with just the bride, the groom, the presiding clergy and two witnesses in attendance, before the Archbishop of Canterbury ordered the complete closure of churches. Funerals were held at gravesides or crematoriums with minimum attendees: the presiding officer, the undertakers, and the deceased's close family.

As more information has been gathered about COVID-19, so people have realised that life is not going to be the same as it was before the global pandemic. We may have to live with coronavirus indefinitely, and humanity will have to adapt to stay safe - people can spread the virus before they develop symptoms. In the post-COVID-19 world, how are we going to greet people, once we start gathering together again? One way is to use a greeting which already transcends its sci-fi origins - the Vulcan hand salute and motto.

Fans of Star Trek know all about this greeting and its origins, but here's a recap for the uninitiated. Leonard Nimoy was hired by Gene Roddenbury to portray the first alien crewmember, Mr Spock, in his original Star Trek pilot. Spock was, in fact, only half-alien, as his mother was human. She had married a Vulcan named Sarek. Spock inherited his father's looks, ears, eyebrows and green blood. He struggled with his human side, and constantly tried to supress it, adopting the Vulcan way of life whereby they keep their emotions well in check. Although he tried to hide his humanity, Spock chose a career in Starfleet, serving upon a space vessel, the USS Enterprise, filled with expressive humans - notably its captain, the ebullient James T Kirk. Upon meeting someone, Spock would perform the Vulcan salute of greeting and utter the words 'Live long, and prosper'. Nimoy had apparently invented this for his character to use in the stories, adapted from a Jewish blessing. It was suitable for a non-hugger and just alien enough to enchant the viewers.

Fast-forward to 2020 and people are wondering how they will greet each other in future, without touching. The Vulcan hand salute is perfect. Simply raise your hand, palm towards your friend. Stretch your fingers, keeping the first two together and the last two together, so a 'V' forms between them. This may take a little practice. Perseverance pays off. If your fingers simply won't co-operate then a small amount of sticky tape should suffice, until they learn. There's already an emoticon of the Vulcan salute on most social media platforms, including Facebook. The spoken greeting 'Live long, and prosper' that accompanies the salute has taken on a whole new meaning in light of the pandemic. Let's hope it catches on; it would be a fitting memorial2 to the man who brought the enigmatic Spock to our television screens over five decades ago.

1China later told the WHO that the affected patients reported symptoms from 8 December, 2019. Sewage water from Milan and Turin in Italy, collected on 18 December, 2019, was found to contain traces of the coronavirus.2A life is like a garden. Perfect moments can be had, but not preserved, except in memory. LLAP. - Leonard Nimoy's final tweet.