Ignaz Semmelweis and the Campaign for Healthy Hand-Washing Content from the guide to life, the universe and everything 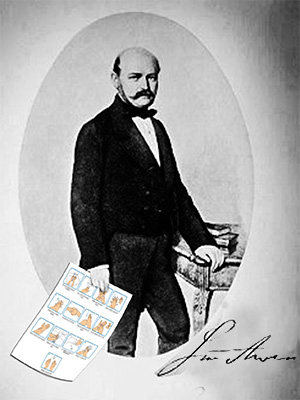 Semmelweis Reflex:   Mob behavior found among primates and larval hominids on undeveloped planets, in which a discovery of important scientific fact is punished rather than rewarded.
– Timothy Leary and Robert Anton Wilson, The Game of Life, p43

Let us sing the praises of Ignaz Semmelweis (1818-65), the Hungarian physician and martyr who saved countless lives by persistently insisting, against overwhelming medical opposition, that it might be a good idea for doctors to wash their hands after handling corpses and before touching pregnant women. This first happened in 1847. Look at that date again, whenever you begin to feel complacent about humans and their devotion to science. A quick look at what Dr Semmelweis was up against, and what happened to him, tells us a lot about our scientific knowledge and how it advances.

What Happened in Vienna

In 1846, Ignaz Semmelweis from Budapest became a medical resident at the First Obstetrical Clinic in Vienna. The clinic offered free medical care to pregnant women. In return, the women agreed to be studied, which meant that if they died, the medical students could do autopsies. The medical students got to do a lot more autopsies than you'd think: 10% of the women who gave birth at the clinic died. The doctors called what they died of 'puerperal fever': a disease related to childbirth. They had a lot of theories about this disease – we'll get to that in a minute – but the basic conclusion was, 'Childbirth is really dangerous. Thank God we aren't women.'

Dr Semmelweis wasn't content with this explanation. He had the strange notion that science was not a body of lore to be memorised, but a method for answering questions. Questions like, 'Why do 10% of the mothers in the First Clinic die, but only 4% or less in the Second Clinic?' Here was some of his reasoning:

The main difference between the work of the medical students and the midwives, Semmelweis found, was that the midwives weren't performing autopsies. But how could that be it? Semmelweis worried over all these deaths – so much so that he became seriously depressed.

The breakthrough came in a sad form: Semmelweis' colleague, professor of forensic medicine Jakob Kolletschka, was directing an autopsy performed by a student. The student's hand slipped and cut Kolletschka's finger with the scalpel he was using. Kolletschka died shortly after the accident, of an impressive array of quite deadly diseases: bilateral pleurisy, pericarditis, peritonitis, and meningitis. Surprisingly, after studying the body, Semmelweis concluded that Kolletschka had died of the same thing his maternity patients were dying of, and which they were calling 'puerperal fever'.

Semmelweis proposed that there was a connection between contamination with cadavers and puerperal fever. The connection appeared to be medical students. Was it possible that something was getting transferred from those dead bodies to the live patients, and making them sick? Pish and tosh, said the medical world. That is unscientific nonsense, and probably a conspiracy theory. Who ever heard of invisible 'somethings' getting transferred between bodies?

In 1847, European and North American medicine knew nothing of germs. Bacteria and viruses would have been regarded as science fiction. So how did they think disease was spread? Here is what a doctor wrote around 50 years later:

It was believed by many that with a certain intensity and extension of the malady a contagion was brought into existence. According to this belief a contagion represented a specific virus which originated only in the diseased organism and that from that point of origin could produce in another individual the same disease. In some minds the contagion assumed the form of a mysterious halo, or areola, which clung to the unfortunate practitioner who had come under its malign influence and rendered him a source of danger wherever he went. Coming near to the time when the doctrine of Semmelweis was announced we find an almost general prevalence of the belief that the pregnant and puerperal woman was a thing unique in nature.
– Richard Cole Newton, A Brief Study of the Contribution of Ignaz Philip Semmelweis to Modern Medicine, p9.

In other words, disease was a sort of 'aura' that got passed around. This sounds rather supernatural to a modern ear. Be that as it may, the medical profession flatly refused to believe Semmelweis. It was absolutely not possible for a gentleman's hands to be dirty enough to infect a pregnant woman. Particularly not a lower-class pregnant woman.

The soap dissolves the fat membrane and the virus falls apart like a house of cards and 'dies', or rather, we should say it becomes inactive as viruses aren't really alive.
– Icelandic chemist Palli Thordarson on Twitter, on why soap and water kill viruses

Dr Richard Cole Newton (1851-1919) wrote a pamphlet about Semmelweis in 1910. He concluded that 'Semmelweis’s interpretation of this phenomenon was as truly a scientific triumph as Isaac Newton's interpretation of the phenomenon of the falling apple.' He also noted, as other biographers of the pioneer have, that Semmelweis might not have figured it out if he hadn't been such a good-hearted person. In A Brief Study of the Contribution of Ignaz Philip Semmelweis to Modern Medicine, he writes: 'Had his pity not been stirred by the unfortunate women condemned to suffering and death while paying to nature the sacred debt of perpetuating their species, probably his great discovery would never have been made.'

Maybe what scientific progress needs is less prejudiced thinking, the patience to study a phenomenon, and enough heart to care about a problem in the first place. In the meantime, wash your hands, with soap and water, for at least 20 seconds, to prevent the spread of bacteria and viruses. And bless the memory of Dr Semmelweis when you do.