Mad Max - the Post-Apocalyptic Movies Content from the guide to life, the universe and everything 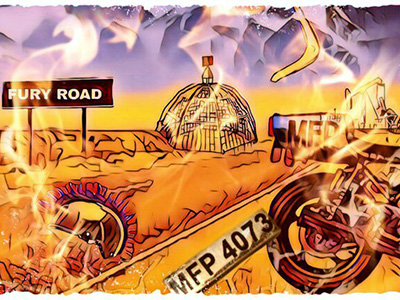 Mad Max is a film series set in a post-apocalyptic version of Australia. The Mad Max movies are regarded as some of the best action films ever made. All of them were written and directed by the Australian George Miller.

The Mad Max movies influenced a large number of works with post-apocalyptic settings, including other movies, games, music videos and TV series.

After a war for petrol, Australia's cities are deserted. What is left of the population lives organised in clan-like structures in far apart settlements in the desert. The old cities lie in ruins. There is a constant struggle for survival, which is mostly dependent on water and petrol. The latter is used to power a multitude of inventive vehicles obviously constructed from pre-war scrap.

The movie series focuses on the story of Max Rockatansky and his adventures in the Australian wasteland. Each movie is set in a different location and, apart from Max, features completely different characters.

The first instalment in the Mad Max saga is truly a strange film which doesn't seem to fit with the others of the series. The back-story and setting are not explained at all and even the plot stays quite obscure for the whole movie. It is one of the films you might expect to be shown late at night and which you watch for 10 minutes before changing the channel.

Mad Max - played by 23 year old Mel Gibson - is a police officer in a rather run-down world full of tuned cars and motorcycles. The police seem to be mostly occupied with hunting down ruthless mechanised nomadic tribes in any possible way. When his colleague is almost killed by the bikers, Max wants to quit but instead is convinced to go on holiday with his partner and baby. Unfortunately it all goes terribly wrong and the same gang kills Max's family, which leads to Max taking revenge.

The world of the first Mad Max movie is not the barren desert of the other movies but even forests and the ocean are shown. People live in badly maintained pre-war houses. Stylistically the whole movie seems quite strange and some props and costumes give the impression of being very much out of place.

Despite all its flaws the movie was extremely successful when it was first shown in cinemas. Produced with a very low budget, this success brought a very high profit for the makers of the film. Some people even consider it to be the best part of the Mad Max series.

The second part of Mad Max is only very loosely connected to the first part. In fact the film would make just as much sense with a different name, because the only connecting element is Mel Gibson playing the title role, even if a few seconds at the start show pictures from the first movie in an attempt to create a link. North American publishers seemed to think the same as they released the movie without 'Mad Max' in the title.

On the search for fuel for his car, Max gains knowledge of an oil refinery in the desert. Unfortunately the facility as well as people living in it are under attack by a gang who also want fuel for their vehicles. Max helps the settlers in return for the desired fuel.

The setting of the movie has now changed to a proper desert area, contrasting with the landscape of the first part. There are no conventional houses any more - all buildings are made from trash. This also seems to be the case for the vehicles, which again feature prominently in the movie. Costumes have also changed a lot, conjuring the post-apocalyptic setting far better, although quite a few of the costumes have quite a strong 1980's touch. One of the female characters for instance looks like she just escaped from an aerobics class.

Much more than the first Mad Max film, Mad Max 2 obviously influenced a lot of later post-apocalyptic works. Players of the Fallout game series for instance will no doubt recognise both the prologue (war scenes in black and white) and the epilogue ('lone wanderer' disappearing in the desert with his dog) of this movie. The marauding cyber-punk petrolheads of Mad Max 2 no doubt influenced the design of Ork vehicles in Warhammer 40,000. A NES1 game based on Mad Max 2 was released in 1990.

Mad Max 2 makes great improvements on the setting and storytelling when compared to its predecessor. This movie set the stage for all later productions depicting future societies salvaging the remains of an earlier and more advanced civilisation which came to an end in a cataclysmic event. Apart from Mel Gibson, Bruce Spence also appears in both of the first two movies taking on similar but not the same roles.

With the setting properly established in Mad Max 2, the third part of the series improves on the post-apocalyptic scene. While not being completely realistic, the world it plays in is believable as much as it has to be. Again Mel Gibson takes on the role of Mad Max, while all other characters are new. The story is more complex and more work has been put into costumes and props. Visually Thunderdome is certainly the most timeless part of the series. It gives a larger impression of the wasteland and its people than Mad Max 2.

After being robbed of all his belongings, Max arrives at the trading post Bartertown. Here he is drawn into a conflict between the town's ruler (played by Tina Turner) and the one controlling its energy supply, methane originating from pig manure.

Mad Max Beyond Thunderdome reminds viewers slightly of Waterworld (which was filmed almost 10 years later and on a much higher budget) without any water. In Mad Max, Sydney is considered a mythical paradise similar to how Dryland is perceived in Waterworld. The tribe of children that appears in the movie is slightly reminiscent of Peter Pan, or probably Lord of the Flies without all the nasty bits. This movie again has no doubt inspired the Fallout series with the tribe of children being very similar to a group of children in Fallout 3, while Barterton seems to have inspired Megaton in Fallout New Vegas.

The fourth part of the Mad Max movies was made almost 20 years after the third movie and therefore many things changed. For instance, true to the time it was made in, it features an abundance of special effects. Costumes and sets step away from realism and become monumental and fantastic. This is also the first Mad Max film in which Mel Gibson does not play the title role. Instead the role is taken over by Tom Hardy. The main villain, on the other hand, is played by Hugh Keays-Byrne, who had already played the head of the gang in the very first Mad Max movie in 1979.

Max has been captured at a settlement which has a large supply of water. This town is controlled by a warlord and his army. When one of his fighters is sent to trade water for gasoline, she secretly helps the warlord's wives to flee in the water truck. A wild car chase starts when it is detected that the truck is not taking the designated route. In the course of the car chase, Max manages to get on the water truck and join the women in their escape.

Where the old Mad Max movies are clearly an inspiration to many other works, Fury Road in many places gives the impression of turning things the other way round. It seems to take back ideas from the works the series once inspired. Warhammer Ork vehicles for instance seem to have inspired many of the cars and lorries in the film.

Fury Road was nominated for 10 Academy Awards and won eight, more than any other Australian movie before. It was even nominated for the Best Picture and Best Director awards.

I Only Came for the Gasoline

The Mad Max movies will no doubt continue to inspire other films, games and stories. The series is certainly a must-see for fans of science-fiction and dystopian worlds. There are plans for more Mad Max movies to be made in the future.