The Etches Collection Museum of Jurassic Marine Life, Dorset, UK Content from the guide to life, the universe and everything 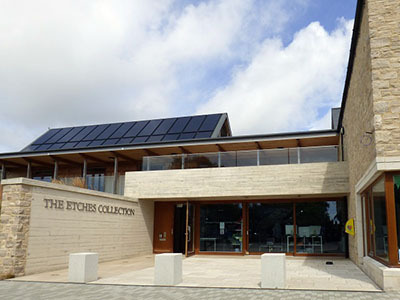 The Etches Collection is a museum situated in the Jurassic Coast World Heritage Site in Dorset, UK. It was designed to enable fossils from the area to be enjoyed by people from around the world while being on display as near as possible to where they had been found.

The museum is located in the village of Kimmeridge, south of Wareham. Such is the importance of the fossil record in Kimmeridge, the time period it spans (approximately 152-157 million years ago) has been named the Kimmeridgian Stage of the Jurassic Period. Kimmeridgian Clay stretches from Dorset to the North Sea, where it is a source of crude oil. Kimmeridgian Soil stretches south into France, where it provides a good growing medium for grapes used in winemaking.

Following in the footsteps of palaeontological pioneers such as Mary Anning, Steve Etches found his first fossil at the age of five and took to fossil-hunting in his 30s as a hobby (while earning a living as a plumber). During the 1980s, 1990s and 2000s, Etches amassed a collection of hundreds of fossils.

Although he was a self-taught amateur palaeontologist, his dedication to excavating as much as possible from a relatively small area generated finds of great scientific importance. For example, Etches found evidence of Ammonite eggs and several new species including a cephalopod (named Etchesia martilli in his honour) and a dragonfly (with the not-so-catchy name Kimmeridgebrachypteraeschnidium etchesi). He was awarded an honorary doctorate by the University of Southampton in 2017.

For many years Etches kept his collection in his garage at home. When the collection grew to include more than 2,000 items, he started making plans for the future. Rather than split the collection by sending items to universities and museums around the UK, Etches was keen to keep the items together in the local area. The Museum of Jurassic Marine Life charity (now the Kimmeridge Trust) was formed in 2004. A site for the museum building was identified in 2008, funds were raised and building started in 2015. The Etches Collection Museum of Jurassic Marine Life opened in October 2016. 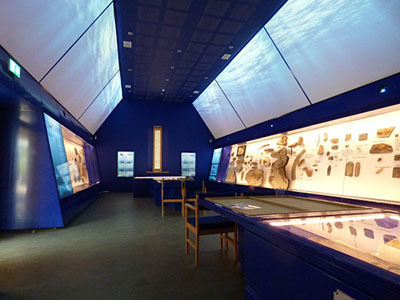 Entering the Exhibition Gallery is like going back in time to when the area was under water. The ceiling features 'Walking with Dinosaurs'-like footage of sea creatures, including Ammonites, Belemnites, Ichthyosaurs and Plesiosaurs, swimming around. Lining the walls are cabinets1, which contain a variety of fossils and some fossil poo. Handwritten text describes the items and their importance to palaeontology.

There are several interactive displays that visitors can use to explore the collection in more detail, plus static timelines describing the geological eras and the dinosaur hunters who studied them. At one end of the room, a glass wall provides views into the Weston Studio Workshop. If nobody is at work in there, a video plays to show visitors the tools, such as chisels and air pens, that are used in the painstaking process of extracting fossils from the rocks they are embedded in.

Other videos feature footage of Steve Etches. Visitors can listen to him answer questions about his philosophy in relation to collecting fossils and founding the museum, or watch him out in Kimmeridge Bay looking for more fossils to excavate. He may even be in the museum workshop cleaning his latest finds, or wandering around outside so that visitors can meet him in person.

Events take place throughout the year, such as Fossil Fun Days and tours of Kimmeridge Bay with Steve Etches himself.

There is a charge to enter the museum, but concessions and family tickets are available, and the tickets allow visitors to return as many times as they would like during a year. The museum is open every day from 10am to 5pm except at Christmas. The shop inside the entrance foyer sells books, replica fossils and other souvenirs, plus hot drinks and snacks2. There is a small lift as well as a staircase to the upper floor, and there are accessible toilets as well as standard toilets. The car park is surfaced with gravel, but there are some spaces for disabled people with a Blue Badge parking permit, and the gravel around them is smaller and slightly easier to navigate.

The museum building was purpose built not only to house Steve Etches' collection, but also to incorporate a community centre, where village events could take place, from committee meetings to art exhibitions. The Community Room doubles as a Clore Education Room3 for school groups to learn about fossils in 'hands on' experiences.

1Watch your shins as you approach the wall cabinets, as the bases protrude. Also, when looking into the cabinets, mind you don't headbutt the glass.2There is a gastropub over the road that sells main meals, including local fish dishes.3Funded by the Clore Duffield Foundation in honour of the philanthropist Sir Charles Clore, who died in 1979.