Cool and Lam: Erle Stanley Gardner's Other Detectives Content from the guide to life, the universe and everything 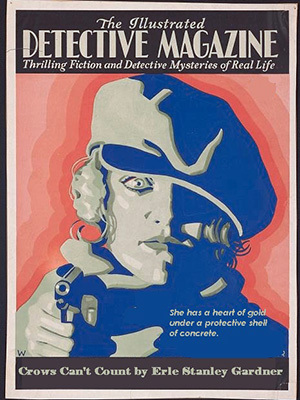 Fictional detectives come in all shapes and sizes – small, large, neat, untidy, astute, dimwitted, holistic   – and from all walks of life – doctors, lawyers, policemen, village busybodies, tough guys, arch aristocrats… There's an audience for each one of these sleuths. You probably know a lot of them. But have you ever heard of Cool and Lam? This detecting duo was the brainchild of Erle Stanley Gardner, of Perry Mason fame.

From Lawyer to Fiction Writer: Not a Long Journey

At three cents a word, every time I say ‘Bang’ in the story I get three cents. If you think I'm going to finish the gun battle while my hero still has fifteen cents worth of unexploded ammunition in his gun, you're nuts.
– Erle Stanley Gardner, on why his hero always shot the villain with the last bullet in his gun.

Erle Stanley Gardner (1889-1970) was (at the time of his death) the United States' best-selling author. His crime-solving lawyer, Perry Mason, featured in 80 novels and 271 television episodes, not to mention films and radio broadcasts. Gardner knew a lot about the legal profession: he was a member of the California Bar himself, although he wasn't as interested in practising law as in writing pulp fiction. At the height of his productivity, Gardner churned out 1.2 million words a year (his estimate) of clever, fast-paced, and often very amusing prose. His readers came away entertained, a little better informed about the law, and a lot better informed about human nature. Gardner's detectives tended to be shrewd, but not unkind observers of the human condition.

In addition to Perry Mason, Gardner invented Lester Leith, the gentleman thief, Ken Corning, another lawyer/sleuth, and the detective duo of Bertha Cool and Donald Lam. When a writer produces that much pulp, it's natural to use pseudonyms. For the Cool and Lam series, which began in 1939 and ran to 30 novels, Gardner used the nom de plume of AA Fair.

'...In case you're interested I can even give you the sordid details.'
'Sordid details always interest me,' Bertha said.
– AA Fair (Erle Stanley Gardner), Cats Prowl at Night

Donald Lam is a remarkably astute detective, but he doesn't start out to be one. It is just that, as a young lawyer, he's too clever by half. He makes the mistake of sharing a procedural insight with a client. The insight involves a legal way to get away with murder, and the client happens to be a gangster. Lam is disbarred and forced to seek less prestigious and more dangerous employment with Bertha Cool. He's so good at it, he eventually becomes her partner in the firm of Cool and Lam.

In actual fact, the loophole did exist, in the Arizona extradition laws, and Erle Stanley Gardner discovered it. His (fictional) use of this loophole caused a certain amount of panic in the Arizona legislature. They quickly convened to close it by changing the law.

'Now listen, Lam,' he said, 'you’re a nice egg but you’ve got yourself poured into the wrong pan.'
–   Top of the Heap

Donald Lam is not your run-of-the-mill noir detective. True, he is clever, dogged, and honest. He solves the crimes and lets the police take the credit, which makes him popular, while earning money, which makes money-grubbing Bertha happy. But instead of being tall, handsome, quick with a gun and his fists, and generally tough-guy debonair, Donald is small, wiry, unarmed, and very, very likely to get beaten up by the bad guys. He gets his own form of revenge, by solving the case and putting the bad guys behind bars.

She has a heart of gold under a protective shell of concrete.
–  Crows Can't Count

Bertha Cool is an even more remarkable addition to the lineup of '30s-and-'40s noir detectives. Bertha is a middle-aged widow, wide of girth (she weighs in at 165 pounds1 and is 5'6"2) and salty of language, who brooks no fools and deals shrewdly. Bertha is handy with her fists, unlike Donald. She's not afraid of anything except poverty. Having lived through the hard times of the Depression, Bertha is very, very tight with her expense account, and prone to evaluate prospective clients by their ability to improve her cash flow situation.

Before the advent of Donald Lam, the Cool Agency specialised in the sleazier but less demanding line of detective work, such as tailing unfaithful spouses. Now that they've moved into the more exacting but also more lucrative area of serious crime investigation, Bertha veers between panic at spending money and greed at the prospect of making it. She adores Donald, her 'cash cow'. But as Donald says, under it all, Bertha has a heart of gold, as Sgt Sellers knows. He wants to marry her.

Nuts and Bolts, Odds and Ends

Fry me for an oyster!
– Bertha Cool, frequently

The following are some odd facts and interesting trivia about the Cool and Lam novels.

Narration Technique: Cool and Lam stories are narrated by Donald Lam, except for two published in 1942 and 1943, when Donald is off serving his country in the Second World War. For these, Gardner switches to third-person, and Bertha takes centre stage. If the novelist had been nervous about his ability to do justice to this hardheaded lady dick, he needn't have worried. Bertha is splendid in Cats Prowl at Night, solving a demanding case on her own, with a bit of help from Sgt Sellers. He doesn't get Bertha to marry him, but he does get a cooked breakfast out of their collaboration.

Title Fun: Cool and Lam titles are iconic. Here is a partial list.

Agelessness: The publication dates of the novels do not mean that the characters have aged in between books. Bertha, Donald, the Sergeant, and secretary Elsie Bland appear to exist in a no-time bubble. They just pick up where they left off. Of course, the world outside their offices goes on, enabling them to fly in jet planes, try out new appliances, and change fashions. The life of a fictional detective is convenient like that.

Other Media: Unlike their cousin Perry Mason, Bertha and Donald didn't fare well in other media. Frank Sinatra did play Donald Lam on radio in 1946, in a broadcast of The United States Steel Hour's version of Turn on the Heat. Gardner and his Perry Mason producer, Gail Patrick Jackson5 made an unsold pilot episode, which starred Benay Venuta as the redoubtable Bertha, and former jockey Bill Pearson6 as Donald Lam.

Posthumous Work: Not all of the Cool and Lam stories were published during Erle Stanley Gardner's lifetime. The second novel he wrote, The Knife Slipped, was initially rejected by the publisher, who didn't like Bertha Cool. She wasn't young, sexy, or elegant. He found her 'unappealing', especially the way she spent all her time smoking, cursing, and trying to chisel money. Gardner philosophically shelved the book and came up with another that showed Bertha in a (slightly) better light. In 2008, a publishing company that did some detective work on its own unearthed the missing manuscript and published it, so you can buy a 21st-century Cool and Lam novel.

111 stone 11, or approximately 75 kg.2168 cm.3Gardner was a lawyer, not an ornithologist. Crows can count: the University of Tübingen has done research.4This one is about marijuana. Get it?5Gail Patrick was two years into law school in Alabama when she won a beauty contest and was lured into the movie business. Bored with acting, Ms Patrick became a producer. Her husband, Thomas Cornwell 'Corny' Jackson, was Erle Stanley Gardner's literary agent (and the model for Donald Lam, according to Gardner). Gail Patrick Jackson was one of the first female producers in US television.6In addition to being a racing jockey with an amazing string of victories, Pearson was a major winner on the $64,000 Question quiz show, and an expert dealer in pre-Columbian art.