Isle of Wight Shipwrecks: Floating Bridge No. 6 Content from the guide to life, the universe and everything 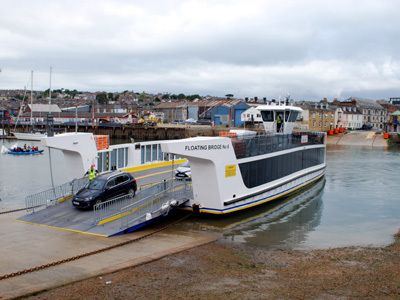 The council ought to bridge that gap
And sell this bloody thing for scrap.
- Lauri Say, 'All Together on the Floating Bridge'

Floating Bridge No. 6 is a floating bridge1 chain ferry that operates between Cowes and East Cowes on the Isle of Wight, transporting pedestrians and vehicles across the River Medina. Although it looks nice, it is largely useless. It has not actually sunk at time of writing, but it has broken down on numerous occasions, broken World Health Organisation and Maritime and Coastguard Agency regulations, broken car bumpers and exhausts, collided with numerous yachts, run aground regularly, been blamed for the collapse of local businesses and so can certainly be classed as a metaphorical shipwreck.

Why is a Floating Bridge Needed?

East Cowes, one of the three vehicle ferry ports on the Isle of Wight, is a town that only has road access along one road. The only other way for a car to get into and out of East Cowes is by crossing the River Medina to Cowes on a floating bridge chain ferry. As this area has very strong river and tidal currents, chain guidance is considered essential for safe crossing, despite the potential risk of the chains snagging the heavy yacht traffic.

Consideration was given to building a conventional bridge with a clearance of 200 ft to allow craft to pass underneath. However, as both Cowes and East Cowes are built-up areas, there is not room for a road ramp to achieve such a height unless it is built a distance out of town, where it is unlikely to be of much use to pedestrians. In 2015 it was projected that acquiring the land and building such a bridge would cost at least £65 million. A swing bridge or other opening bridge would also cost too much and, as river users would have priority, would spend most of its time closed to road traffic and so be of little benefit. Building a tunnel beneath the river between the two towns was also considered; however, based on the 2011 Hindhead Tunnel, it was estimated that the cost would be £150 million. In comparison, a budget of £3.5 million was agreed for a new floating bridge.

The controversy began when the Isle of Wight Council announced that they would replace the existing - and perfectly working - Floating Bridge No. 5 with one that would be built in Wales2, rather than with one built on the Island, such as by Wight Shipyard who had successfully built high speed ferries Red Jet 6 (2016) and Red Jet 7 (2018) as well as Thames Clipper ships for London. The old floating bridge was removed from service in January 2017 and the council announced the new one would not enter service until May that year. Floating Bridge No. 5 was put up for sale and, after a lack of interest, it was announced that it would be turned into razor blades. Although a pedestrian launch was used to ferry pedestrians across the Medina, vehicles had no choice but to make a 12-mile detour via the Island's most congested point at Newport to get from Cowes to East Cowes.

It should be noted that in the May 2017 elections the Island Independents lost control of the Isle of Wight Council, having held it since 2013, and the Conservatives regained a majority. This change in council coincided with the period that Floating Bridge No. 6 came into service.

In March 2017, hoping to generate a sense of pride and interest in the new vessel, the Isle of Wight Council announced a competition to name the new ship. This was not the first time that a public competition had been held to name a ship. In 2016 there had been a nationwide public vote to name a £200m polar research ship. The overwhelming choice, Boaty McBoatface, was overruled and the ship was named RRS3   Sir David Attenborough instead, although the automatic yellow submarines the ship carries are called Boaty McBoatface.

Predictably, the runaway choice of name for Floating Bridge No 6 was Floaty McFloatface, with Blyskawica a second choice. The Isle of Wight Council at first announced it would veto that name, then rescinded the veto following an outcry, and then announced they would postpone announcing the final decision for at least a month. They have not made any announcements about the floating bridge's name since, with the decision not so much swept under the carpet as sunk without trace.

Since the vessel has come into service and its unreliability has become apparent, it has become (un)popularly known as Floaty McFloatfarce.

A number of requirements were listed for the new Floating Bridge:

Burness Corlett Three Quays were appointed as the Naval Architects tasked with designing the bridge. In preparation for the bridge coming into service it was advised that a 30-metre section of the River Medina be dredged to allow an additional 1.5 metres of depth. This was not done, although work was carried out on the chain pits, chains and both slipways in preparation for the new vessel's arrival.

Floating Bridge No. 6 was built to have an expected lifespan of 40 years like its predecessor (which, considering it broke down within 24 hours of becoming operational seems incredibly optimistic) and 'around twice the carrying capacity of previous vessel, Floating Bridge No. 5'. This seems an odd definition of 'twice', as the (theoretical) maximum number of passengers is still 400, for safety reasons, and 20 is not twice 15, but average car size had increased since Floating Bridge No. 5 was launched.

'Be a complete, disastrous laughing stock' was not one of the official requirements, which is a shame as that would have been the only requirement that could reliably be met.

O hear us when we cry to Thee
For those in Peril on the floating bridge.

Please note that this list does not include the numerous yachts that the floating bridge has collided with or snagged with the chain, nor the cars that have had damaged bumpers and exhausts disembarking from the vessel.

Floating Bridge No. 6 is far, far noisier than its predecessor. The sound can best be described as like a blue whale in labour with the only available midwife being a wailing banshee assisted by the heavily-chained ghosts of Jacob Marley and Ebenezer Scrooge, only much, much worse.

It remains impossible to assess whether Floating Bridge 6 will achieve all of the required outcomes provided to the Naval Architects that designed the vessel, until such time as the council has resolved the two principal issues in relation to the clearance over the chains at an ebb tide and the noise of the vessel... the report itself presents a number of findings in an open and transparent way - so that the local community, local interest groups and the wider Island are all able to understand how a new vessel, costing over £3.7 million pounds of public money to build, has failed to provide the service expected.

Some observers have said the design of the bridge means it will never be able to operate to its full specification.

A Freedom of Information request in October 2019 revealed that the 'new, more efficient Floating Bridge' had, between October 2018 and September 2019, resulted in costs of £149,115.33 for hiring MV Seaclear as pushboat barge to assist during crossings against the tide, plus £181,189 to hire a passenger launch when the bridge was out of action, as well as £110,760 on chain depth surveys.

Unlike the previous floating bridge, which made a steady annual profit, Floating Bridge No. 6 cost the Isle of Wight Council money that could have been used for other vital services.

One of the aims of Floating Bridge No. 6 was to 'double passenger capacity'. However, although the ferry is much larger than its predecessor, it has been revealed that the number of vehicles carried dropped 53% in 2017/18 compared to 2015/16. Although exact numbers were not recorded as pedestrians and cyclists were not ticketed before Floating Bridge No. 6 came into service, it is estimated that foot passenger numbers fell by over 40% in the same period.

It's disgraceful. People don't have the confidence to use the floating bridge - they don't trust it. It's affected tourism, investment and the community's ability to interact.

1In the UK chain ferries are commonly called 'floating bridges' but should not be confused with pontoon bridges, where a bridge is built to float on a series of boat-like pontoons that rise and lower with the tide.2By Welsh boat builders Mainstay Marine.3Royal Research Ship.4The total length including the hull in the water as well as the ramps, which rise either side like a drawbridge when the vessel is in motion. These rest at a forward-pointing angle rather than vertically.5The Lake Windermere Floating Bridge Mallard was built in 1990 and is due to be replaced in 2020. It is a similar size to Floating Bridge No. 6.