'Godspell': The Musical and the Hymnbook Content from the guide to life, the universe and everything 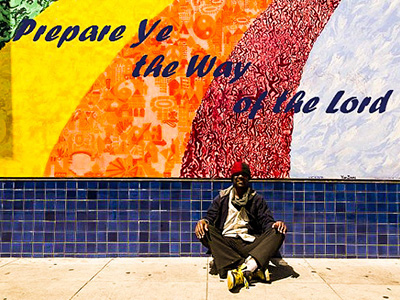 It may amuse you to know that when the film version of GODSPELL opened, I was roundly criticized for the lyrics for 'Save the People' by Richard Schickel, the movie critic of Time Magazine, who quoted them disparagingly. Apparently he's not Episcopalian. Sincerely, Stephen Schwartz
– Stephen Schwartz (who is Jewish) in reply to the question 'Where did you get the lyrics for 'Turn Back, O Man'?'

Carnegie Mellon University (CMU) is noted in practical Pittsburgh as an engineering school, but its School of Drama, the oldest in the United States, has produced a remarkable number of influential figures in theatre, television, and film. Actors Jeff Goldblum1 and Holly Hunter, singer-songwriter Loudon Wainwright III, and lyric baritone Josh Groban are among the talented alumni. Stephen Schwartz, the composer and lyricist quoted above, is also a CMU graduate. In the early 1970s, Schwartz composed the music and wrote 'additional lyrics' for Godspell, the folk-rock Broadway and film musical based on the Gospel of Matthew.

In the 21st Century, the musical Godspell doesn't stir much controversy: it's frequently performed in US high schools – at least religious and private ones, and even some public schools after the obligatory church-versus-state debate results in the conclusion, 'Well, it's culture.' When it first came out, though, Godspell was mildly shocking to some people: Jesus dressed as a clown? His parables acted out by disciples dressed like something out of Commedia dell'Arte? And what about this 'folk-rock' music? Some of that stuff has a beat, and you can dance to it. There hadn't been any dancing in American churches since the Shakers.

Audiences who enjoyed the music, and critics who didn't, were alike puzzled by the lyrics behind the catchy beats. Before we examine the composer's sources, let's take a quick look at the genesis of Godspell. It was a musical of its time, and reflected popular concerns.

Overalls in St Paul, and What Happened Next

John-Michael Tebelak (1949-85) was a student at Carnegie Mellon. It was Easter, 1970, and he was supposed to be working on his master's thesis, which had something to do with Greek and Roman mythology. He took a break to attend the Easter vigil at nearby St Paul Cathedral, a towering Gothic Revival (Catholic) church. Tebelak, a lifelong Episcopalian (American Anglican) who appreciated the theatre of church ceremony, nevertheless attended service wearing his usual student outfit of t-shirt and bib-and-brace overalls (dungarees). He must have looked suspicious to the policeman outside the cathedral: on his way out, Tebelak was frisked for drugs. Hippie types made the Establishment nervous in those days.

Tebelak was saddened by the incident. He thought it contrasted unhappily with his own view of the spiritual import of Jesus of Nazareth's teachings. He went home and started writing furiously. The result was the musical Godspell, which made its way, eventually, to Broadway and to the film screen. Along the way, Tebelak acquired a collaborator: Stephen Schwartz. Schwartz isn't an Episcopalian: he's not even a Christian. Arguably, the composer's personal beliefs were as irrelevant as the playwright's sartorial choices when it came to dramatising this particular story, but that's where the musical came from.

Where Did the Words Come From?

The title, 'Godspell', comes from the Old English word for 'gospel'. It is a literal translation of the Greek ευαγγελιον, which means 'good news'. Referring to the gospel as the 'Good News' was a popular trope among young Christians in the 1960s. Evidence for this can be found in the Good News Bible, a translation brought out by the American Bible Society in 1966.

Most of the dialogue in Godspell comes directly from the Gospel of Matthew, although Jesus didn't tell John the Baptist, 'I want to get washed up,' even in the Good News Bible version. He probably also didn't say, 'Did I ever tell you I used to read feet?' The parables, however, are really part of a 2,000-year-old text. The irreverent, down-to-earth tone is pretty authentic, as well, as a reading of the original will indicate2.

Surely the songs were completely original, though? That, of course, is what confused the Time Magazine critic. Not all of the song lyrics were original. 'Prepare Ye the Way of the Lord', while an original composition, is based on a Bible quotation. 'By My Side', by Peggy Gordon, is from the original off-Broadway production. Schwartz composed many of the songs, such as 'Beautiful City', 'All for the Best', and 'Light of the World'. Surprisingly to most theatregoers, perhaps, some of the songs from this hit musical feature lyrics by... hymn writers. Old hymn writers. Of course, the tunes used to be stodgier. Here are some examples for comparison.

Godspell seems to have become part of the community/school theatre repertoire these days, in addition to enjoying periodic professional revivals, such as the one on Broadway in 2011. The songs are probably here to stay, even if you still aren't likely to hear one of them in St Paul Cathedral4. Now you know where they came from.

1Goldblum is also a musician.2Apparently you still need to be able to read Greek to know that in Matthew 15:17, Jesus said, 'Don't you get it that whatever goes into the mouth goes into the stomach and is expelled into the privy?' He was talking about ritual purity laws.3Tune names like 'Old [Number]' refer to the psalm they originally accompanied, back when versified psalms were all the rage. See 'Wrestling Jacob: Smash hit of 1742'.4They have been heard in St Paul's Church in Covent Garden.