The Strange Worlds of Larry Niven Content from the guide to life, the universe and everything 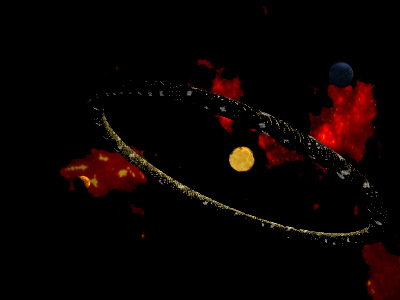 Larry Niven (born 1938) is an American science fiction writer who was active from about 1970 to about 2000. He has a degree in mathematics1 and is interested in physics, so his stories have a strong scientific strain to them - Niven delights in writing about amazing things but keeps the science fairly well grounded in our modern laws of physics. For example, his giant Ringworld uses centrifugal force to simulate gravity for the inhabitants, rather than inventing a magical 'artificial gravity'.

Niven came up with many strange worlds for his stories. The early ones were planets with unusual features that strongly influenced the stories. Later he became interested in 'megastructures', huge constructions on the scale of planets or entire solar systems, which would provide plenty of living space for the human race or other similar alien races. He is credited with inventing the Ringworld, an idea which was later used and adapted by others in works such as the 'Culture' books of Iain M Banks or the Halo series of console games by Microsoft.

This world was discovered by a robot lander, which measured the conditions at the surface and found them ideal for human life. A ship-load of colonists landed on the planet, but found that the habitable land was in fact a plateau of only 80,000 square miles (the size of Great Britain or half the size of California) at the top of a 40-mile-high mountain. They named the planet 'Plateau' because of this. The mountain was so high that conditions at the top, while normal for Earth, are unusual for the planet. The rest of the planet is uninhabitable, with ultra-dense, poisonous air and hellish heat.

The colonists, unable to return home, created a strange civilisation based on a lot of people in a very small area. A ruling class, consisting of descendants of the original ship's crew, control a slave-like population descended from the original passengers on the ship. Organ transplants have become the standard form of medicine. Any crime is punishable by death, leaving your organs free to be transplanted into the ruling class. The ultimate crime is to jump off the side of the plateau, not only killing yourself but making your organs unavailable.

The planet Jinx is oval in shape rather than circular - an ellipsoid to be precise2. This was caused by it being in close orbit around a gas giant (a giant planet similar to Jupiter) when it was being formed. The strong tidal gravitational forces stretched the planet as it hardened. Later, Jinx was disturbed and moved outwards away from the gas giant and the region of tidal forces, but retained its oval shape. Now it has the unusual feature that its surface gravity is normal at the two ends, where people live, but about twice as strong at the middle, which is a jungle region inhabited by giant slug-like creatures known as Bandersnatchi.

The Puppeteers' Fleet of Worlds

The Puppeteers are a civilised alien race who are the most cautious in our galaxy. While they are masters of manipulating others for their own gain, they are unwilling to take any risks that will endanger themselves. When they discover that the suns at the centre of the galaxy have exploded in a chain reaction and that there is a huge shock wave travelling outwards towards them, they decide to move their entire civilisation outwards towards the edge of the galaxy, planets and all, to avoid being destroyed, even though the shock wave won't arrive for another 20,000 years. Their fleet consists of five planets which spin around a central point in what is known as a Klemperer Rosette3. The spinning group of planets travels away from the core of the galaxy, always trying to keep ahead of the wave of destruction.

This is probably Niven's most famous invention - a world the size of a solar system, in the form of a long narrow strip of metal bent around into a circle. The radius of this circle is the distance from our Earth to the Sun, so that the Ringworld is the size of Earth's orbit around the sun. There is a star positioned at the centre of the ring. The ring rotates and the centrifugal force produces an outward force away from the star. People live on the inside of the ring, and experience it as a flat surface with the sun directly overhead providing light and heat. The Ringworld provides a living space eight million times that of the Earth. It is described in more detail in the Entry Larry Niven's Ringworld - a Vast Construction in Space.

Niven describes these in a short essay about giant structures, but admits that he didn't invent them himself. A megasphere, also known as a Dyson sphere, was invented by Freeman Dyson. It is a complete sphere with the same radius as a Ringworld, giving a livable surface area 500 million times that of Earth. The sphere will capture all the energy given off by the enclosed star, which is more than enough to provide for the power needs of even the most power-hungry civilisation. Unfortunately, there's no easy way to make or simulate surface gravity. If the sphere is spun, then the inside of it will experience a simulated surface gravity, but only near the equator will it be in the right direction to make living possible.

Niven speculates that a really big megasphere, big enough to hold a sizable portion of a galaxy, could use the stars inside for power and have people living on the outside, where gravity would be so weak that they would effectively be living in space.

Megaspheres appear in many science fiction stories, including Bob Shaw's Orbitsville series, Stephen Baxter's The Time Ships, and an episode of Star Trek - The Next Generation ('Relics').

Cosmic macaroni, invented by 'ideas man' Patrick Gunkel, is a world consisting of a hollow tube a few kilometres in diameter and very, very long - typically billions of kilometres. A tube a billion kilometres long can be bent around into a circle the size of the Earth's orbit around the Sun. Put a star in the centre of the circle to provide heat and light. With two billion kilometres, we can wrap it around the star twice. As more and more sections are added, the tube eventually becomes like a giant, tangled garden hose or a bowl of (uncut) macaroni, bending and overlapping, but with the star somewhere in the middle to provide energy.

The cool thing is that the tube can be spun to provide simulated gravity inside. You can think of the tube as billions of very short cylinders, each one fixed to the next. Because the tube is curved to circle the Sun, each cylinder is at a microscopically different angle to the ones beside it, but because the tube is so long in comparison to its width, these angles are negligible. All the cylinders can be solidly attached to each other and each can spin around its own axis.

The most elaborate world described by Niven is probably the Smoke Ring. Niven came up with the idea, but got help from his friend, physicist Robert L Forward, to work out the details.

It is a world of air, in which people, animals and plants float in a zero-gravity volume of air. In order to achieve this, three masses are needed - a star, a large 'gas giant' planet similar to Jupiter and a very small, very dense mass which in this case is a neutron star4. The neutron star and the normal star orbit around each other, and the planet orbits around the neutron star. The atmosphere of the gas giant planet is pulled away from the planet by tidal forces and eventually forms a doughnut-shaped5 volume of air orbiting around the neutron star. Since every molecule of air in the doughnut is in orbit, it experiences the zero-gravity 'free-fall' that astronauts feel in space. So this is an entire world made of air, with huge amounts of space to live, if you can adjust to living without gravity.

The high level of radiation coming from the neutron star encourages mutations, allowing humans to evolve quickly into forms more suited to the lack of gravity6. Niven speculates that the distant descendants of colonists would eventually develop wings and become angel-like creatures. The title of the world, the 'Smoke Ring' is supposedly based on what it looks like when approaching from space, as the discoverers did - it is like a giant ring of smoke around the neutron star.

1A Bachelor of Arts in mathematics from Washburn University, Kansas.2The shape made by rotating an ellipse around its long axis.3Although this was mis-spelled as Kemplerer in the book.4A neutron star is the remnant of a large star after a supernova explosion. The centre of the star is compressed by the explosion into an ultradense sphere which is about the mass of our sun but less than the size of a typical planet.5An American ring doughnut rather than an English jam-filled one.6This is a very simplified view of the effect of radiation on humans.