Chavasse Park, Liverpool, UK - Urban Oasis and Family Tribute Content from the guide to life, the universe and everything 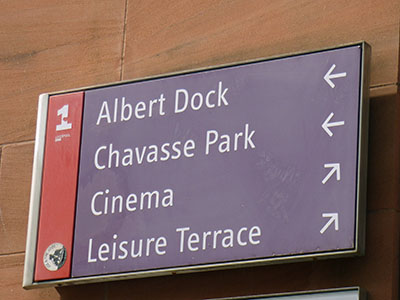 Chavasse Park is an oasis of green space in the middle of the Liverpool One shopping area in the city of Liverpool in the North West of England. It is named after the Chavasse family, or rather three of the men in the family, who distinguished themselves in the city and around the world.

Visitors to Liverpool are likely to see Chavasse Park soon after entering the city as its green-ness stands out between the pale-coloured buildings on The Strand. The Strand, near the Waterfront, is one of the main streets in the city and the main route from the Mersey Tunnels into the popular Liverpool One shopping area. 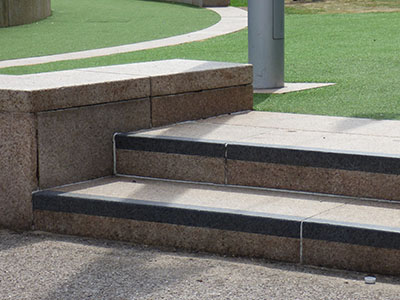 From The Strand, a flight of steps leads up to the top of the Park. Lifts are also available, although they can be somewhat confusing - some service the Park and the car park beneath it, while others only go to the upper and/or lower level of the St John's Street shopping complex within Liverpool One. However, the lifts do allow access to both the top of the Park and the terrace halfway up the flight of steps so that people who cannot climb stairs can also enjoy the green space.

There had been a green space named Chavasse Park in the city since the 1980s, but it was not well used (although it was the home of a replica Yellow Submarine1, from the Beatles film of the same name, during 2000-2004) and it was taken over when the area started to be redeveloped in 2004.

Chavasse Park as it is today opened in 2008 and is a popular refuge from the hustle and bustle of the shopping streets below. People can recline on the grass (some of which has been replaced by artificial turf so that it is more durable) or sit on stone benches. Some deckchairs have also been provided to give the Park a proper summer vibe. The Park is flanked by bars and food stalls, so refreshments of various kinds are available, and a sound stage has been installed (like a modern bandstand) so that live or recorded music can be played, creating a festival atmosphere when the weather permits.

Sadly, the fact that the Park is named after three members of the Chavasse Family has been relegated to a footnote on the official website and at time of writing (2018) there is no obvious mention of them within the Park itself.

Francis Chavasse was born on 27 September, 1846. He was educated at home because of illness, then went to Oxford (Corpus Christi College) to study Law and Modern History. He went on to obtain a First Class Degree. He was ordained into the Anglican Church in 1870 and held jobs as a curate and vicar before becoming Rector of St Peter-le-Bailey Church in Oxford in 1877. There he met Edith Maude, a vicar's daughter, and they married in 1881. They had seven children between 1883 and 1891 including two sets of twins.

In 1889 Francis had become the principal of a theological college in Oxford. His credentials, and his ability to work well with people across the range of beliefs within Anglicanism, led to him being appointed Bishop of Liverpool in 1900. His major achievement in that role was the establishment of the plans to build a cathedral in the city. Construction began in 1904. War and bombings disrupted the plans, but the cathedral2 was finally completed in 1978. Bishop Chavasse retired to St Peter-le-Bailey in 1923. He died on 11 March, 1928, and is buried in the Founder's Plot in Liverpool Cathedral3.

Noel Godfrey and Christopher Maude Chavasse were identical twins born on 9 November, 1884. They contracted typhoid fever before they were a year old - they survived but were somewhat weakened as a result. They were educated at home until they were 12 years old, and then went to school, where they gained strength from sports and athletics4. Christopher followed in his father's footsteps and was ordained into the clergy by Bishop Chavasse himself in 1910. Noel took the same vocational path as his uncle Sir Thomas Chavasse, becoming a doctor and surgeon after having graduated with a First Class degree in Natural Sciences at Oxford and studying Medicine at Liverpool University.

At the outbreak of World War I Christopher enlisted as an Army Chaplain, while Noel became a member of the Royal Army Medical Corps and joined the King's Liverpool Regiment. Christopher was wounded in 1917 but recovered and was awarded the Military Cross. Noel was posted to Belgium and tasked with keeping the soldiers fit to fight in trench warfare. The men struggled with illness including stomach upsets and the 'flu in addition to trenchfoot (a frostbite-like condition caused by persistently wet feet)5 and mental and physical injuries sustained in battle. Noel also went on expeditions to recover the bodies of those who were killed. He was awarded the Military Cross in 1915 for his efforts at recovering injured soldiers during a battle at Hooge.

In 1916 Noel saved the life of an injured soldier by amputating the man's arm in a wood by the light of a torch and then bringing him to safety. For this and similar actions that year he was awarded the Victoria Cross. A portrait of him soon featured on cigarette cards. Also that year he became engaged to his cousin Gladys, the daughter of Sir Thomas. In 1917 he was offered the role of surgeon in a military hospital, but turned down the opportunity to leave the Front Line as he felt he could not leave his men while he was still a 'young fellow'. On 31 July that year, during another battle, he was hit in the head by shrapnel while in a first aid post and his comrades had to provide first aid to him. He was able to carry on working, and even went on an expedition to rescue more casualties. On 2 August he was injured by a shell explosion but carried on working in spite of the serious wound to his abdomen. After the battle he was taken to hospital, but died on 4 August, 1917, at the age of just 32. He was awarded a posthumous Victoria Cross for this bravery on 14 September, 1917. Noel's letters from the trenches are available online.

Christopher survived the war and became Rector of St Peter-le-Bailey after his father's death. Francis had had plans to establish a new theological college aligned to his evangelical ethos, and Christopher built on those plans - St Peter's College, Oxford was formally instituted in 1961. Christopher was appointed Bishop of Rochester in 1939. He died on 10 March, 1962, aged 77. St Peter's College now holds the Chavasse Family Archive.

Although the daughters of Bishop Chavasse were not granted an official tribute in the name of Chavasse Park, they were notable in their own right.

Dorothea was the eldest child of Francis and Edith, born on 18 March, 1883. When she married in 1908, her father officiated and she was given away by Sir Thomas. She and her husband, Reverend George Foster Carter, had three children and lived in Birkenhead on the Wirral. During World War I she worked to support soldiers by organising the sending of parcels of food and warm clothes to them. In peacetime she did parish work:

in spite of the fact that she was an invalid and had to use a bath-chair6.
- Obituary in The Times, 15 November, 1935

Edith Marjorie and Mary Laeta were non-identical twins born on 26 September, 1886. At the outbreak of World War I, Marjorie and May, as they were known, worked to support soldiers with their older sister. In 1915 May went to France as a volunteer with the Liverpool Merchants Mobile Hospital. She was awarded the 1914-15 Star, the British War Medal, and her Victory Medal had an oak leaf on it because she had been 'mentioned in dispatches'. She also served as a nurse during World War II. Marjorie stayed in England and after the First World War she worked for the Barnardo's charity. Both lived to over 100 - Marjorie died on 27 July, 1987, while May died on 26 February, 1989, at the age of 102.

Bishop Chavasse had two other sons; they were not included in the official Park tribute either although they too showed heroism.

Francis Bernard was born on 2 December, 1889. He followed in his older brother Noel's footsteps, studying Natural Sciences at Oxford and then Medicine at Liverpool University. He joined the Royal Army Medical Corps in 1916 and was posted to Egypt, then Gallipoli and then France, where he served as the medical officer to a battalion of the King's Liverpool Regiment.

The youngest child of Bishop Chavasse was Aidan. He was born on 26 July, 1891. He studied Mathematics and History at Oxford and was expected to go on to take a role in the clergy, but when World War I broke out, he enlisted into the army and went to France with the King's Liverpool Regiment, where he joined Bernard's battalion. He undertook a number of high-risk reconnaissance missions and had success, until 3 July, 1917. Under cover of darkness, he led a patrol into barbed wire in No Man's Land between the trenches but he was wounded in a German attack. First aid was administered, but his team was unable to carry him to safety without endangering their own lives, so they went back to the trench without him. That evening, when it was dark again, Bernard assembled a rescue party, but when they reached the place where Aidan had been lying, he wasn't there. Bernard led search parties and enquiries were made in France and Spain, but Aidan's whereabouts were never discovered. He was officially declared dead on 22 February, 1918.

In peacetime, Bernard became an ophthalmologist in Liverpool and published papers on eye health, lenses and stereoscopic photography. He died on 5 July, 1941, when he lost control of the car he was driving at speed. His passenger, a hitchhiker, was thrown out of the vehicle, but survived.

1The Submarine was built in 1984 for the International Garden Festival and can now be seen outside Liverpool John Lennon Airport.2Not to be confused with the Roman Catholic Liverpool Metropolitan Cathedral that was built between 1962 and 1967.3Edith died aged 76 on 3 July, 1927, and became the first person to be buried in the Precinct of Liverpool Cathedral.4In 1908 they took part in the Olympic Games in London but did not win any medals there.5His battalion, the Liverpool Scottish, wore 'fighting kilts' so leg warmth was even more difficult to preserve.6An early type of wheelchair, popularised in Bath.