Bray Head Cliff Walk, Wicklow, Ireland Content from the guide to life, the universe and everything 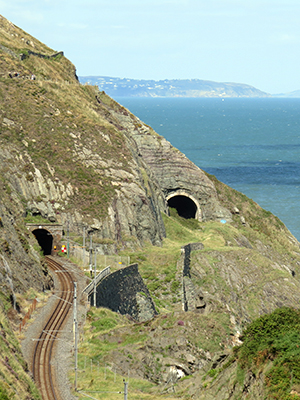 This is a very pleasant walk in County Wicklow, along the coast from Greystones to Bray. As described here the walk is a total distance of 9km. This could be shortened to just over 6km if someone with a car dropped you off at the start of the cliff section and collected you at the end of it.

Bray Head is a bare and rocky headland which falls steeply on its east side into the Irish Sea. The Dublin to Wexford railway line was built between the cliff and the sea in the 19th Century. Like most of Ireland's railways it was designed by William Dargan, but for this section he consulted with Isambard Kingdom Brunel. The track was a difficult piece of engineering as tunnels and bridges were required in many places, and some sections collapsed into the sea, requiring diversions. The railway is still used for mainline rail trains, but it also now carries the DART (Dublin Area Rapid Transit) system with frequent trains used by commuters.

The cliff walk runs close to the path of the railway, mainly above it, so there are many views down onto the track. The path is entirely on stone, gravel or road surface, but can be slightly rough, so it is not necessarily suitable for disabled people. Runners/trainers are adequate footwear - you won't need your hiking boots. There are very few steep sections of path - the highest point is only 80m above the lowest point. The walk offers striking sea and cliff views, but as a result is very exposed to the wind. Do not attempt this walk on a windy day as you will be worn down by the wind.

Both Bray and Greystones are served by the DART trains, which come approximately every 30 minutes. These can be used to get to and from the towns, and also at the end of the walk to return to the starting point.

There are two ways you can do this:

Park at Greystones 'Park and Ride' car park. Walk through Greystones, along the cliff path to Bray. At Bray Station, get a DART back to Greystones (about 10 minutes). Walk back to Car Park. Food is available in both Bray and Greystones.

Get a DART from Dublin to Greystones (about 55 minutes). Walk through Greystones, along the cliff path to Bray. At Bray Station, get a DART back to Dublin (about 45 minutes). Food is available in Bray.

(This is assuming that you won't want to eat before the walk.)

Getting to the Start of the Walk

In order to describe the route only once, the walk is taken to start at the railway arch which is common to both routes.

Arriving in Greystones by Car

The Greystones DART Car Park is at satnav co-ordinates 53.139743N, 6.058972W. If you're travelling to Greystones along the N11, take either marked exit towards Greystones and follow the signs towards the town. You'll see the car park on the right-hand side just after the Woodlands Lodge. It's free at all times and is intended for people using the DART train service. Since you're going to return to Greystones on the DART, you can legally park here.

Arriving in Greystones by DART

As you come out of Greystones Station, turn left and walk south for about 250m to the arch under the railway which is marked 'SOUTH BEACH'. Go through the arch.

Turn left after going under the arch, and walk along the coastal path. You pass a beach, then a rocky section, a small sandy cove, another rocky section, then you arrive at Greystones harbour.

The harbour has been in the process of reconstruction for a number of years (as of 2016) and the exact location of the path may vary. Watch out for signs saying 'CLIFF WALK'. As of February 2016, you should enter the harbour, then keep left making sure to end up on the path between two tall green metal fences, rather than between one of those fences and the water.

From this point on for the next 6km, there is almost no way of leaving the route, so you won't have to make any navigational decisions.

The path starts out with a grim walk between high metal fences with spiked tops. Don't worry about the fences, they only last for about a kilometre.

The path then reaches a much more pleasant section, going through a large field. There are low fences on either side of the path. Watch out for stonechats - little birds that behave like robins, following you along, perching on fence posts and chirping.

After a few hundred metres, you pass a road going left which crosses the railway line. This is one of the few points where you can leave the path before you reach Bray.

Along the next section you will see the railway running beside you on the left, but after a bit it disappears underground.

After another kilometre, there's a wiggle in the path and it goes into a wooded area. You should now be able to see the sea through the trees on the right. You may be surprised to see that you've been steadily climbing and are now about 40m above the sea. While in the wooded section, watch out for robins.

This is the most spectacular section of the walk, along the cliff with Bray Head above you and the railway line below. The railway keeps disappearing into tunnels.

After about 500m, the path climbs for about 100m up to a wall and passes through a gap in the wall. In the next 100m, it passes back through the wall and descends to its former level. Be careful of your footing on this stretch; it is the only really steep bit in the whole walk.

At one point along the walk, you can see a railway tunnel and outside of it a second tunnel which is unused. The section of track which originally used the outer tunnel became unsafe and it was decided to build the second tunnel further inland.

At about 1.8km into this section, you will see the ruins of a stone house on the left. When the cliff walk was first opened in the 19th Century, the owners of the land charged a toll at this point to cover the upkeep of the path.

Soon after this there is a shelter, the path widens and the surface improves. You're nearly finished the cliff section.

About 600m later you will see a gap in the wall on the left side. There's a path here that would bring you right to the top of Bray Head where there is a concrete cross which is visible from the town of Bray. It's quite a strenuous climb up to the cross, but there's a great view over Wicklow from the top. The cross can also be reached by a much longer and gentler climb from the main Bray to Greystones road further west.

Just after the path, you'll see a flat expanse of concrete on the left. For many years there was a chairlift from here to about half way up the Head, where there was a café/tearooms called the Eagle's Nest. A little bit further on, the path crosses a bridge over the railway and this is the last we will see of it until we arrive at the station.

After crossing the railway bridge, the path descends to the level of Bray Seafront. Bray was a popular seaside resort in the 19th Century and there are still traces of this visible - many of the large buildings along the seafront were originally hotels, although very few of them are now in business. There's a nice promenade of about 1.5km which is a popular place for walking your dog or for a bracing stroll on a windy day. The prom looks down on the beach and there is a pleasant grassy area behind it with paths and a bandstand. In the buildings facing the promenade there are shops, cafés, restaurants, hotels and 'amusements' of the slot-machine variety. It's still a lively enough place at weekends or in the summer. About half way along the promenade is the National Sea Life Aquarium, in a building which also houses some restaurants.

Walk along the promenade beside the railings, which gives you a view of the beach on one side and the grassy area on the other. At the aquarium, turn away from the sea and go up Galtrim Road. Pass under the railway, then turn right down a small laneway. After another 200m, you'll arrive at Bray Station.

You can buy a ticket from here to Greystones for about €3.501. Having bought your ticket and gone through the turnstiles, you need to cross the track at the footbridge - the trains towards Greystones go from the far side.

The train brings you back along the route that you just walked. You can see the same views from slightly different angles. As you exit from Greystones station, turn left to return to the car park, or right for the main street of the town, with a number of good restaurants such as the Three Qs, Las Tapas, and the Happy Pear (vegetarian/vegan), all highly recommended.