Dry Rot, or How Not to have your House Eaten Content from the guide to life, the universe and everything 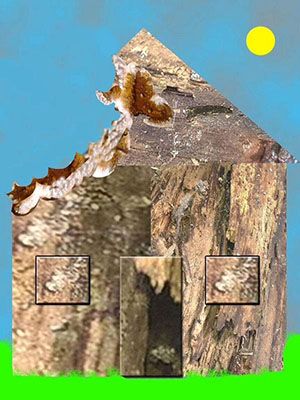 Let's start by saying this: Dry rot is not nice. It is as stealthy as one would imagine a mushroom ninja can be, and as fast as a tortoise1. It can also eat your house. Seriously, we mean it.

To give a rather dry description, dry rot (serpula lacrymans) is a bracket fungus which infects timber and masonry, often creeping along behind plaster on walls and viciously attacking defenceless skirting boards. It will utterly desiccate timber, breaking down cell walls and turning healthy wood to so much sawdust. In order to do this, the average moisture content of the timber needs to be over 16%, but preferably over 20%.

In order to spread, the fungus needs three things:

Light is not a necessity, as it will often be found growing where there is very little or no light at all. Even the first requirement becomes less of a necessity as the fruiting body develops to maturity, as it seems to be able to extract enough moisture from the air to keep itself going. Indeed, this is where the second part of its Latin name comes from - lacrymans meaning crying or weeping - as the surface of the fruiting body seems to be full of moisture.

The anatomy of dry rot breaks down roughly as follows:

Commonly, the first sign of dry rot is a cuboidal cracking appearing in timber (usually the skirting board or door architrave), or the appearance of an unsightly 'mushroom'. Care should be taken when attempting identification, however, as although dry rot is a 'brown rot', not all brown rots are dry rot.

If you notice anything like this in your house you are advised to call an expert2.

Treatment of dry rot usually involves removing of plaster, flooring and anything affected, sterilising the area with biocide, the filling of your house with hairy tradesmen, copious quantities of hot beverages and, occasionally and regrettably, swearing.

1If you've ever taken your eyes off a tortoise for more than a moment, you know what that means.2In the UK you can try the website of the Property Care Association, and search for a recognised, trained company who are members.