Death by Slow Cooker: Possibility, or Sales Gimmick? With Recipes Content from the guide to life, the universe and everything 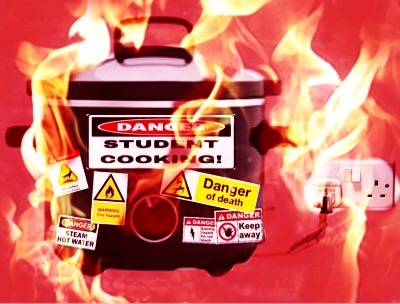 Anyone want to buy a #crockpot? Wife came in talking about some TV show and how she will never use the crockpot again. Thanks, #ThisIsUs
- @LetsGoRU, 23 January, 2018

We're heartbroken over last night's episode, too! But don't worry, you can still make your favourite meals in your #CrockPot with confidence. We want to assure all consumers we rigorously test our products for safety. DM us & we'd be happy to tell you more about our safety standards.
- The Crock-Pot™ Brand @CrockPotCares 24 January, 2018

The line between reality and fiction is often blurred in the public consciousness, as many a soap opera actor has discovered when meeting outraged fans in the supermarket. But perhaps not since the death of Little Nell has a fictional tragedy affected so many so quickly as did the kitchen fire in the 23 January, 2018, broadcast of the popular US television drama series This Is Us.

In this thrilling, never-to-be-forgotten episode1, fire consumed the (fictional) family home of the (fictional) main characters, and – maybe, possibly, no spoilers here – took the life of Jack, an exemplary (though fictional) husband and father. After the Superbowl, Jack – as we have mentioned, an exemplary modern husband – tidied up, swept the kitchen floor, put away the leftovers, washed all the dishes, and... turned off the crock-pot2. Alas, the slow cooker was elderly, like the couple who had donated it, second-hand, to Jack's family, out of sheer neighbourliness (as seen in a flashback). A loose connection caused a short in the electrics, which, in turn, led to a conflagration... and thrilling television. There wasn't a dry eye in the viewing demographic. Excitement about further developments was at fever pitch – along with outrage regarding the perfidiousness of home appliances.

Almost immediately, the Twitter memes emerged. Heartbroken audience members threatened to throw their slow cookers into the rubbish bin in sympathy for Jack's misfortune. Others – including major news outlets, possibly glad for the distraction from politics – launched into a fevered discussion of product safety. The Crock-Pot™ company was forced to open a Twitter account to reassure cooks everywhere that their products were rigorously tested and perfectly safe when used as directed. Sympathisers and slow-cooking fans started a hashtag thread: #CrockPotIsInnocent.

So how do you make sure your slow cooker is safe? What exactly is a slow cooker? Do you want one in your kitchen? What can you do with a slow cooker, anyway?

What Is a Slow Cooker?

A slow cooker is an electrical countertop kitchen appliance. It is designed to cook foods at a low temperature, allowing them to steam and simmer over hours. Foods that would normally be boiled – such as pot roasts, stews and soups3   – are suitable candidates for slow cooking.

A slow cooker can have two main components, the cooking pot and the heating unit, or the two components can be combined in one unit. Removable cooking pots can be immersed in water for easier cleaning. The slow cooker also requires a lid to retain moisture while cooking.

Do You Want a Slow Cooker in Your Kitchen?

First off, a slow cooker occupies countertop space, or takes up valuable cupboard room. Make sure you're going to use the appliance before you consider getting one. Now to the, ahem, burning question: are they safe? Well, it depends.

Slow cooker manufacturers with a good reputation point out – no doubt correctly – that their appliances undergo rigorous testing. However, not all slow cookers are new: the appliance has been in wide use since the 1970s4. According to the US National Fire Protection Association, slow cookers are implicated in around 150 US home structure fires per year. That's enough to recommend caution. So what should you do to make sure you're using your slow cooker wisely?

The Erie Insurance Company of Erie, Pennsylvania, who also watch television, recommended the following in their blog of 25 January, 2018:

Speaking of food safety, if your electricity supply isn't reliable, a slow cooker may not be for you. If you come home on a hot day to find your alarm clock blinking, indicating a power interruption, you may not want to hazard eating that chicken gumbo. Just saying.

What Can You Do with a Slow Cooker?

So you've decided your slow cooker won't burn down the house, and you've installed those solar panels. What next? There are many fine recipes online, and there are cookbooks for sale at your bookseller's. Here are a couple of simple recipes to get you started.

Get up before noon. Into (clean) slow cooker, place:

Remember to put the lid on tightly, so no steam escapes. The steam helps the cooking and makes it taste good. Go to class – your professor will be pleasantly surprised to see you. Come back at least five hours later. The smell will be driving everyone in student housing mad with hunger. Invite your friends, and tell the rest tough luck, go to the dining hall.

If you're really ambitious, serve with tossed salad and French baguette (don't forget the butter!).

On the Sunday the preacher and his wife are coming for lunch, get up one half-hour early. Prepare chicken as follows:

Two cut-up fryers will feed a family of five, one well-behaved preacher's wife, and one hungry preacher. The chicken will almost fall off the bone from being in the slow cooker for 3-4 hours, depending on length of sermon. Preacher will declare chicken to be 'better than the Colonel's', a high compliment, indeed. Ignore the way the preacher's wife looks at you. Share your secret with her privately for a spiritual blessing.

1Until the next one, probably.2Crock-pot=slow cooker. Although Crock-Pot™ is the brand name of a popular cooker, many English speakers worldwide use this name as a generic term.3A warning: beans, though usually boiled, should probably not be cooked in a slow cooker. Raw or dried beans, especially kidney beans, can be highly toxic if not cooked at a high enough temperature. Please use caution and look up proper cooking times and procedures for all beans.4Slow cookers first came on the market in the 1950s, but the product took off after it was reintroduced by the Rival Company in 1971. In all fairness to the cooks of history, however, it should really be pointed out that slow cooking using an open hearth had been around for centuries before that (if not millennia). The technical term for this form of slow cooker was 'Grandmother'.5A whole fryer cut into pieces will yield two wings, two thighs, two legs and two breasts (four if you divide them).6Do not, under any circumstances, use olive oil for this purpose. If you do, you will have ample opportunity to test all of the smoke detectors in your home.7'Thoroughly done' in chicken terms is 165° Fahrenheit (73.8889° Celsius) as measured with a meat thermometer. Note: Dark meat takes longer than white meat.