Dr Creep, Ohio Horror Host Content from the guide to life, the universe and everything 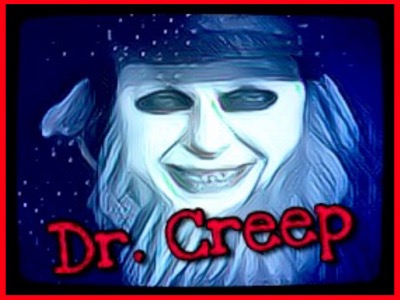 Horror hosts are an American tradition going back decades. They dress up as spooky original characters and present classic horror films1 with themed comedy bits bookending commercial breaks. Some notable examples include Elvira and Chicago's Svengoolie. Horror fans from the Dayton, Ohio area have a special place in their hearts for the local host known as Dr Creep.

Dr Creep, real name Barry Hobart, was the star of Shock Theater (briefly known as Saturday Night Dead) from 1972 to 1985, as well as co-hosting the children's programme Clubhouse 22. Originally called Dr Death and sporting skull make-up, he dressed in black, and donned a cape and top hat. The make-up was deemed too frightening for younger audiences and was scaled back to white face paint with black around the eyes along with the new moniker, but the name didn't fit as well with the new look. The show featured mostly black and white classics - films like Abbott and Costello meet Frankenstein (1948) and The Last Man on Earth (1964) with Vincent Price. The comedy sketches ranged from parody songs to interviews with the featured monsters to Benny Hill-style bikini girl chase scenes.

Dr Creep was still hosting the children's show until 1985 when the television company WKEF made the decision to cancel all local programmes except for sport and news in order to save money and make more space to broadcast national shows. Shock Theater was originally presented live but after the 1980 Halloween Party2, when a flasher appeared on the show, the management at WKEF decided to require that the show be taped and that the tape be reviewed by management before the episode aired. It too was cancelled in 1985.

The good Doctor continued making public appearances, however, doing autograph signings every October at Foys Five and Dime, Fairborn, Ohio's year-round Halloween store, and starting in 1997 hosting Horrorama, an annual horror movie marathon with trivia and costume contests held in a local theater to benefit the charity Project Smile. This kept him very much in the public consciousness and led to the re-launch of his television show, now called The New Shock Theater, running from 1999 to 2005. He continued hosting Horrorama until his deteriorating health prevented him from making public appearances (the last time he appeared in public was in October 2010, at Foy's).

He passed away on 14 January, 2011, but still lives on in the hearts of the Dayton horror community, and posthumously starred in two comic book series by Dayton-based Sparkle Comics. His trademark laugh still brings joy to generations of Ohio horror fans.

1Often those that have passed into public domain, but other times the hosts paid for the rights.2Which can be seen on the Best of Shock Theatre DVD.