'Class' - the Television Series Content from the guide to life, the universe and everything 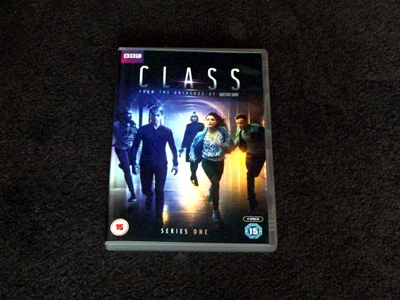 Class is a 2016 Doctor Who spin-off set in Coal Hill Academy, a school in London. Eight 45-minute episodes were made and broadcast in a year without a series of Doctor Who, yet despite the Doctor appearing in a couple of episodes, it appears to have been defeated by terrible ratings and reviews.

This school regularly appeared in Doctor Who. It was in the very first episode ('An Unearthly Child', 1963) when it was attended by the Doctor's granddaughter Susan. Ian Chesterton and Barbara Wright played two of her teachers. In 'Remembrance of the Daleks' (1988) set in November 1963, the school was the battleground in a Dalek civil war. When the Doctor was investigating, the headmaster enquired whether the Doctor was visiting to apply for the post of caretaker. The school basement was also the first location where a Dalek ascended a staircase. In the 2014 series, Coal Hill School was where companions Clara Oswald and Danny Pink taught and the Doctor briefly did become the school's caretaker.

None of these events from Doctor Who directly affect any of the episodes of Class, but there are minor references for the eagle-eyed. One classroom is labelled the Barbara Wright Room and Ian Chesterton is a name on the board of governors. Similarly there is a Roll of Honour board mentioning the names of companions Clara Oswald, Danny Pink and Susan Foreman. There are various other in-jokes - for example one past pupil was listed as Molesworth N.

Other than the name 'Coal Hill School' the only stated links are: head teacher Mr Francis Armitage, played by actor Nigel Betts who had been in three episodes of Doctor Who in 20141; an introductory appearance from the Twelfth Doctor, played by Peter Capaldi; and a blink-and-it'll-probably-kill-you appearance by a Weeping Angel2.

For this new series the school has become an academy, so is obviously now run by sinister forces rather than the local council. Due to all the alien activity that has occurred here in the past, the boundaries that separate this world from other dimensions has worn thin, leaving a rift through which aliens invade.

Their lives and what happens in them are as important as alien invasions, so the prom being cancelled is as big a deal as genocidal aliens running amok in Shoreditch.
- Producer Derek Ritchie

The cast of Class was nominated for an award for promoting diversity. Charlie is a Rhodian alien prince from Rhodia3, a world that had been divided by a bitter civil war between the two native intelligent species, the Rhodians and the Quill, before the Shadowkin wiped out all but two survivors. He has a box said to contain the souls of his people which, according to legend, could be used to wipe out the Shadowkin. Miss Quill, who is in the school as its physics teacher, is Rhodia's other survivor. However she was a member of the Quill, a race that Charlie looked down on as less civilised than his own, considering her a terrorist who committed atrocities against his people while she had considered herself a freedom fighter resisting Rhodian oppression. She had been caught by the Rhodians and forcibly underwent an operation to place a parasite in her brain to make her incapable of harming Rhodians or handling weapons, thus enslaving her so that she became Charlie's bodyguard.

The Shadowkin seek to destroy all the universe and once bonded to their victim by becoming its shadow, cannot be killed without killing their intended victim. One of their victims is April, who miraculously survives, but at the cost of now sharing her heart with the Shadowkin king, which is slowly turning her into a Shadowkin. Her father had tried to kill her and her mother several years earlier when depressed, but this resulted in her mother being paralysed from the waist down. Her boyfriend at school is Ram, a Sikh and former talented footballer who lost a leg during the Shadowkin attack. He likes whining and dislikes his replacement leg4. April is also friends with Tanya, a Nigerian child prodigy who is two years younger than her classmates and isn't in the series as much as her character deserves. Her tragic backstory is that her beloved father died. Matteusz, meanwhile, is Charlie's plus one rather than a member of the gang in his own right. He was disowned by his Polish family because of his sexuality.

Ever since their appearance in 2011 Doctor Who episode 'A Good Man Goes To War', the BBC had received requests for a Doctor Who spin-off featuring Victorian Homo reptilian investigator Madame Vastra, her human lover and partner Jenny Flint and their Sontaran butler Strax. Instead, the BBC commissioned a completely different series that had been pitched by Patrick Ness, a Carnegie Medal-winning writer of Young Adult fiction5 who had been asked by producer Brian Minchin if he would like to write an episode for Doctor Who.

It was fantastic to be asked to write episodes of 'Doctor Who', but I thought at that moment I'd rather do something of my own.
- Patrick Ness

Frequently referred to as 'the British Buffy', eight highly-polished episodes were made, introduced by a lavishly lacklustre trailer.

Class was promoted with a five-second trailer following The Great British Bake-Off, a programme that consistently attracted over 13 million viewers. However, instead of showing that it was a Doctor Who spin-off full of monsters and aliens, it was promoted showing an empty corridor, a marketing campaign that was as empty as the impression this gave viewers. As the potential audience had not been shown any reason to watch, unsurprisingly they didn't.

In October 2016 Class launched on BBC Three, now an online-only channel that is viewable on the BBC iPlayer. The first episode was viewed 660,000 times, the second episode under a third that and interest waned in the episodes following. The series was broadcast in January 2017 on BBC One, when two episodes were shown at a time in the Monday night graveyard slot from 10.45pm onwards. The first episode received just over a million viewers while the second had half that, with numbers declining over the rest of the series. The series' Appreciation Index6 ratings were also poor, particularly among the target audience of 16-34 year olds.

Following the first series it became clear that the viewing figures were extremely disappointing. Although the appalling advertising campaign and late broadcast times were responsible for the first episode's poor ratings, the show itself failed to retain the few viewers that had watched. Rather than simply announce that the series had been cancelled, the BBC made no announcements regarding the show. Following the spread of rumours in February 2017 that the series was cancelled, the BBC's silence was taken by many as saying that it was true, there was not going to be a second series. That June, Patrick Ness announced that even if the series did make a second series, he would have nothing to do with it. With the show's very creator washing his hands of the whole debacle it was clear that the show was over. BBC3 controller Damian Kavanagh finally officially confirmed Class was cancelled on 7 September, 2017.

The teenage characters spend half their time jumping into bed with each other, and the other half moaning, presumably because that is what the writers believe are the only things teenagers do. Though the show was applauded for having a widely diverse cast, a character from a diverse background who does absolutely nothing is just as pointless as having a generic worthless character.

Perhaps one reason the series failed is that all the characters are so busy having a tragic backstory, the audience has no reason to actually like them. One or two characters who have experienced tragedy will evoke feelings of empathic sympathy, but when the audience is overloaded with everyone being in that situation, it is easier just to lose interest.

Another reason is that in trying hard to be 'the British Buffy', it didn't actually do anything to differentiate itself from that show or others set in schools, such as the first few series of Smallville. There was often a monster of the week which results in background characters being unexpectedly killed in ways that presumably are meant to be shocking, but instead leave the audience asking, 'Oh, is that person dead now too?' Similarly, there was a strong degree of repetitiveness in the amount of time spent in each episode on characters endlessly debating the morality of whether or not Charlie should use his magic box to wipe out the Shadowkin.

That said, there were positives about the series. While all the male characters predominantly came across as whiny and whining, the female characters remain strong and interesting, even if they do disconcerting things like wonder whether their conversations pass the Bechdel Test or not7. That said, there is one praiseworthy scene in which Ram opens up to explain what his Sikh faith means to him. Had the series included the main characters having more dialogue of this calibre rather than bed-hopping and bemoaning, the series would have actually had something worth hearing.

Best of all is the character Miss Quill. Katherine Kelly as Miss Quill dominates the show and steals every scene she is in, getting the best lines and sarcastically putting down the other characters. The strongest episode of the series is the one that focuses on her rather than the often-annoying teenage characters, which sadly suggests that the format of setting the stories in classrooms was holding the series back overall.

1'Into the Dalek', 'The Caretaker', and 'Dark Water'.2Weeping Angels appear to be stone statues of angels while they are looked at, but can move and attack when they are not being watched – especially when their intended victim blinks.3The fictional Rhodians from Rhodia should not be confused with the fictional Rodians from Rodia that feature in the Star Wars universe.4A gift from the Doctor, this is a prosthetic leg of alien origin made by a race of centipedes.5He had also adapted his own novel A Monster Calls into a 2016 film.6This seeks to measure how much the panel audience enjoyed a programme by measuring factors from the simple 'how enjoyable did the audience find the programme' to more detailed questions such as how much of a programme was watched (whether the audience lost interest and turned off) and whether it was felt to be of high quality or distinctive. This gives a total rating out of 100.7In the scene in question the answer is probably not, unless two women discussing someone who isn't actually a human male but is merely a shape-changing alien disguised as a human male doesn't count.