Frank Laubach: Teaching the World to Read Content from the guide to life, the universe and everything 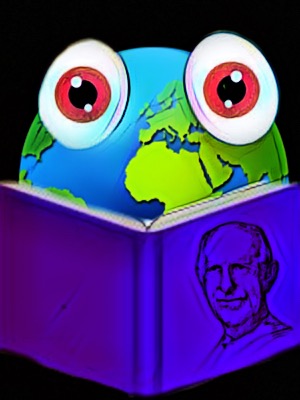 The way to lay up a treasure in Heaven is to help human need. It is the only way that Jesus ever gave us.
- Frank Laubach, Wake Up or Blow Up: America, Lift the World or Lose It!, 1951, p.12.

In 1927, three out of every five humans on Earth couldn't read. Illiteracy condemned billions of people to lives of poverty, debt bondage, or even outright slavery. They suffered from disease and hunger. Unable to read, they were at the mercy of others who took advantage of them. The simple act of teaching them to read could give them the power to change their world. All they needed was a volunteer with a few skills and a ton of passion. He showed up.

Here is the story of Frank Laubach (1884-1970), the missionary who taught the world how to read. He just needed a push from Heaven – and a little help from his dog.

A Hillside, a Dog, and a Prayer

...this entire universe is a desperate attempt of love to incarnate itself...
- Frank Laubach, Forty Years with the Silent Billion: Adventuring in Literacy, 1970, p. 37

In 1929, missionary Frank Laubach from Pennsylvania was staying in Lanao with three American education officials. Their task was to find a way to educate the Moros, the Muslim people of this part of the Philippines – a country that was colonised by the United States at the time. All four men were desperately lonely, because they'd left their families behind in Manila. According to Laubach, 'While they drowned [their loneliness] in whiskey, I drowned mine in religion.' Laubach was a practical man with a lot of enthusiasm and a lively sense of humour, but he took his prayer life very seriously. Every evening, while the other three headed for the pub, Laubach headed for Signal Hill with his dog Tip, to 'talk to God and the sunset.'

One evening, Laubach was so depressed by his inability to make headway that he felt completely defeated. He knew he was doing something wrong: but what? As he sat there in the setting sun, fending off the dog, who was trying to lick the tears from his face, Laubach found himself speaking aloud, as if the Creator had taken over his vocal chords: 'You feel superior to them because you are white. If you can forget you are an American and think only how I love them, they will respond.' Laubach described the experience as 'that night on Signal Hill, when God killed my racial prejudice and made me color-blind.' The lesson took: Laubach discovered a love for everyone on the planet.

The next thing Laubach did was to study Islam. When he discovered that Christians and Muslims shared three out of four sacred texts, and that Mohammed and Jesus agreed about basic ethical principles, he felt he had his bridge between cultures. Soon, he was ready to tackle the literacy problem. For his first project, Laubach invented a writing system for Maranaw, a Philippine language that had never been written down. Soon, Lanao was experiencing a literacy revolution. The primers and textbooks were being printed at a rapid rate, but teaching so many people was an exhausting chore. That's when the breakthrough came.

The first thing the teacher must have clearly in mind is that he must help the student:

Frank Laubach put together a brilliantly simple system for teaching literacy that could easily be adapted to any language – except maybe English. 'English is the world's worst spelled language,' he complained, and became a 'spelling Bolshevist', working on a simplified spelling for his native language. But his system of phonetic charts and easy gospel lessons was wildly successful in languages from Arabic to Zulu. Before it could go around the world, though, he had to educate Lanao. Some volunteers worked tirelessly, teaching a hundred or more of their neighbours a month. More was needed – this literacy business was turning into a craze.

The answer to the teacher shortage came from a surprising source, as Laubach tells it:

Kakai Dagalangit, a tall chieftain with fierce black eyes, stood up. He has thirteen wives and all he has to do is to look at them and they behave... he looked at those teachers with his fierce eyes and said, 'I'll make everybody who knows how to read teach somebody else, or I'll kill him.'
Everybody taught. Nobody died. Everybody liked it. I did not like the motto 'teach or die' and so changed it to 'Each One Teach One', and this method, started by the Moro chieftain, has gone around the world.
- Frank Laubach, Forty Years with the Silent Billion: Adventuring in Literacy, 1970, p. 44.

The method of 'Each One Teach One' became a world phenomenon – and it's still being used. Laubach and his volunteers worked out a set of 312 one-on-one lessons that could be used by anyone with basic literacy skills. Laubach added common-sense instructions for would-be teachers. They stressed simplicity, encouragement, and providing what educators would call 'a positive learning environment'. These tips are pure literacy (and ESL1) gold:

Many people think they make a point by repeating, sometimes in a loud, disagreeable voice. They drill, they hammer it in. It feels like a dentist drilling a tooth! If you say it clearly and slowly once, the student will remember it. People like a whisper more than a shout. When a young man makes love successfully, he whispers in his sweetheart's ear.
- Frank Laubach, How to Teach One and Win One for Christ, 1964, p. 32

People learned. All over the world, they learned. And they loved their teachers. It was hard to resist the enthusiasm of a mentor who urged his teachers to 'keep your student tintinnabulating with exhilaration!'

A Zealous and Noisy Campaign

For the next 40 years, Frank Laubach travelled the world, organising volunteers, convincing authorities, and scaring up printing presses for primers. In Jerusalem, he argued with Arabic scholars that they should let the teachers use 'common' words to teach beginners, rather than insisting on literary language. In Beirut, he helped the Druse fight for literacy for their people. In Africa, he persuaded Ethiopian emperor Haile Selassie to drop 227 letters from the massive Coptic syllabary. (They were shot down by Coptic priests, but it was a valiant try.) Then he puzzled out ways to write down Zulu clicks. Literacy turned out to be a very popular trend:

The Arabic primer required three weeks to teach. Within five months four hundred had been taught and given certificates. When every one who could see had been taught in Hirz, they moved on to Gaawir, where a large percentage of the town was taught. Then the zealous members from Hirz invaded another town named Diijab, and then the city of Manhari. Twelve young Egyptian men accompanied the team to this city, and trained the church members in a tremendously zealous and noisy campaign.
- Frank Laubach, How to Teach One and Win One for Christ, 1964, p. 60

In the US, Laubach trolled for money and volunteers. He wrote books like Wake Up or Blow Up: America, Lift the World or Lose It! to tell the West to live the gospel before it was too late. Frank Laubach believed that God demanded it, Jesus modelled it, and its time had finally come:

Each One Read More

Would you like to read more Frank Laubach stories? Try his memoir, Forty Years with the Silent Billion: Adventuring in Literacy, available online through archive.org. You'll have to wait your turn to check the book out. The introduction was written by the famous travel author and newsreel/television host, Lowell Thomas. He had this to say about Laubach:

To all who see our world as a race between compassion and suicide... here is the thrilling story of a man who has had the courage to attempt the impossible and make it seem possible.
- Lowell Thomas, Introduction to Frank Laubach, Forty Years with the Silent Billion: Adventuring in Literacy, 1970

By the same arrangement with archive.org, you can check out and read Laubach's Wake Up or Blow Up: America, Lift the World or Lose It!, which offers his solution to the Cold War.

You want to know what the Laubach people are doing these days? Watch a brief interview with Frank Laubach's son Bob.

You want to learn the Laubach Method? Go googling on archive.org. Or contact your local literacy council. They're sure to be accepting volunteers.

We'll let Frank Laubach have the last word, because it's his story:

The only irresistible gospel is love in action...
- Frank Laubach, Forty Years with the Silent Billion: Adventuring in Literacy, 1970, p. 16

It's hard to argue with that.