The Banana Trip: Fake Hippie News from 1967 Content from the guide to life, the universe and everything 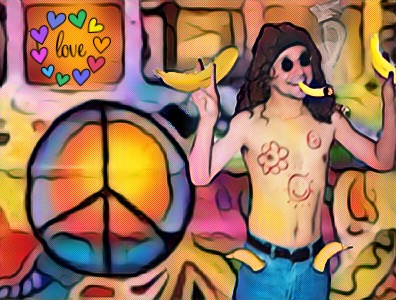 Fake news is (or should be) the anarchist's weapon of choice. If you want to unsettle a society, first undermine the public's sense of reality. Nobody knew that better than the hippies in the late 1960s. One of their favourite pastimes was confusing 'the Establishment', by which they meant any members of organised, institutional society. Hoaxes were a fun, low-cost way to torment the Establishment. At their best, hoaxes led to enlightenment: at their worst, everyone got a giggle, provided they had a sense of humour. The foregoing is to explain why in the spring of 1967, the US Food and Drug Administration wasted taxpayer money on a device to 'smoke' bananas, while a somewhat more in-tune Congressman jocularly proposed the Banana Labelling Act of 1967. Before we're done with this story, we'll also hear from that radical newspaper, The Berkeley Barb, and take a quick look into the notorious Anarchist Cookbook.

It wasn't really Donovan's fault – his 1967 hit song 'Mellow Yellow' was a fortuitous piece of synchronicity. Originally, it was all Country Joe McDonald's fault, he of the 'I'm-Fixin'-to-Die-Rag'. Country Joe was the son of actual former communists who lived in Berkeley, California, which was a hotbed of radical thought in the 1960s. During those heady, head-tripping days, his band, Country Joe and the Fish, spread musical dissent up and down the West Coast of the US. They also experimented quite a bit with 'controlled substances'.

According to Country Joe, in 1967 a band member became convinced that dried banana peelings (skins) could be smoked for a 'legal high'. The experiment, which involved baking the banana skins to dry them, took rather a long time. In the meantime, the band prepared for a concert. In between sets, the musicians smoked 'joints' made of dried banana scrapings. They experienced some wild effects, and cheerfully spread the joyous news. It soon became impossible to acquire a banana in Berkeley, California, for love or money.

But did bananas really perform as advertised? Both the counter-culture and concerned guardians of public health wanted to know.

'MELLOW YELLOW FUTURE BRIGHT – Are bananas just a current fad, a passing fancy among the seekers of New Awareness, or are they destined to permanently occupy a niche in the Pantheon of the Hip?'
- Berkeley Barb, 17/3/1967

If you want to know the chemical composition of something, it is usually wiser to ask a chemist than a musician. When even the Establishment paper, the San Francisco Chronicle, ran an article entitled 'Kicks for Hippies: The Banana Turn-On1', professionals became alarmed. The FDA tested the hypothesis that dried banana peels could have a hallucinogenic effect. An apparatus was set up to 'smoke' the banana joints. The smoke was trapped in retorts, tested chemically, and subjected to spectrophotometric analysis, which was about as advanced as chemistry got in 1967. Result?

There were no detectable quantities of known hallucinogens in these materials.
- FDA Report

Country Joe and his band heard about this when the FDA report was released in May. At first, they were puzzled. After all, they had been seriously impaired at the concert where they smoked all those banana joints... then Joe remembered that the jar of drinking water they'd shared with the stage crew that night had been more than just water. In fact, the stage crew had laced it with LSD to liven up the proceedings. Which accounted for their 45-minute version of 'Not So Sweet Martha Lorraine', and of course the confusion about banana peels. Oh, well, they shrugged. No harm done, only a bit of government time wasted. It would all be forgotten in a week, right?

MELLOW YELLOWS make fine fellows – Ha, Ha, Ha, the SF Establishment said Mellow Yellow doesn't get you high. About 520 people got stoned out of their skulls in front of their establishment cameras and no cops... in Panhandle Park... The Diggers had about a pound and a half of mellow yellow which was the final result of the 100 pounds of bananas which they processed over the weekend. The bananas cost $20.
- Berkeley Barb, 24/3/67

Throughout March 1967, the Berkeley Barb didn't let the 'Mellow Yellow' story die. They continued to publish articles touting the virtues of smoking banana peel. Donovan's hit song helped the rumour to spread. So did another completely accidental banana reference: the Velvet Underground's premiere album, designed the previous year by Andy Warhol but only released in March 1967, had – you guessed it – a banana on the cover2. One could almost swear that some supernatural power was behind all this... The hippies didn't care. It was fun, and they kept the joke going as long as possible.

In May 1967, (after the FDA report), there was a 'three-day cosmic love-in' at New York's Central Park, complete with banana effigies, banana-related chanting, and of course, bananas for sale. The New York Times reported that vendor Harold Chizman had added a new wrinkle, charging a 'deposit' on the peelings. Chizman offered a three-cent rebate on the 15-cent price for a returned banana skin3. The Mellow Yellow hoax was going great guns.

Congressman Frank Thompson, Jr, of New Jersey, proposed the passage of a Banana Labelling Act to protect consumers. How serious he was can be guessed from his tongue-in-cheek speech:

From bananas it is a short but shocking step to other fruits. Today the cry is 'Burn, Banana, Burn.' Tomorrow, we may face strawberry smoking, dried apricot inhaling, or prune puffing4.

The Banana Hoax had only taken four months to spread from coast to coast. And this was before the Internet. The Berkeley Barb had done its best, but another publication was going to put bananas into the history books.

Anarchists Get Together, Sort Of

William Powell was a 19-year-old Greenwich Village resident and aspiring writer. He'd just got a draft notice, and he was pretty angry at the government. Using only information freely available from the New York Public Library and various alternative newspapers, Powell composed the Anarchist Cookbook, a brief compendium of recipes for drugs, explosives, and improvised weaponry. In between chapters with headings like 'How to make tear gas in your basement' and 'Formulas for the straight dynamite series' was to be found the following:

Believe it or not, bananas do contain a small quantity of Musa Sapientum bananadine, which is a mild, short-lasting psychedelic. There are much easier ways of getting high, but the great advantage to this method is that bananas are legal.
- Anarchist Cookbook by William Powell, New York: Barricade Books, Inc, 1971, p.55.

Powell never tried this recipe, as far as anyone knows. In fact, he never tried any of his recipes, except, possibly, the cookies, brownies, and other perfectly ordinary foodstuffs the book recommends for handy marijuana insertion. Powell was an imaginative teenage writer, not an actual practicing anarchist. In later life, Powell became an internationally recognised educator. He deeply regretted his authorship of the Anarchist Cookbook, and later published a statement on the Amazon sale page of the book in which he stated that he deplored the continued publication of his early work, and wished it would go out of print. Alas, he didn't own the copyright, and the Anarchist Cookbook, complete with unfortunate recipes, is still around. Even if the title were no longer available for sale, the contents are readily obtainable on the web, including that bogus banana-skin recipe.

What, If Anything, Have We Learned?

Fake news is not new. Hoaxes are as old as humankind, and probably date back to the first tall tale told around a Palaeolithic campfire. It doesn't take a computer to spread a rumour, just one mouth and one ear. As far as biochemical research can determine, there is no way to get high from smoking banana peels. But urban legends do not die easily. As Cecil Adams says in The Straight Dope, 'I'll bet even the pranksters at the Barb didn't expect suckers to be falling for it 35 years later.' And yet he gets questions...

1On 4 March, 1967.2With a peel-off banana-skin sticker that became a rare collector's item.3Jack Manning, 'Inhibitions and Movies Unreel As a Love-In Turns Itself On; At Cosmic Love-In, Bananas Were Peeled and So Were the Inhibitions', New York Times, 3 May, 1967, p.46.4Congressional Record, 19 April, 1967, vol 113, Cong. 90, Session 1, Parts 7-8, p.10084. The speech is worth reading in its entirety, especially the part about whether fried bananas on the menu in the Capitol cafeteria explain 'the trancelike quality of much of the 90th Congress proceedings.' This speech probably includes the first, if not only, Congressional mention of the Land of Honalee.