'Great British Menu' - the Television Series Content from the guide to life, the universe and everything 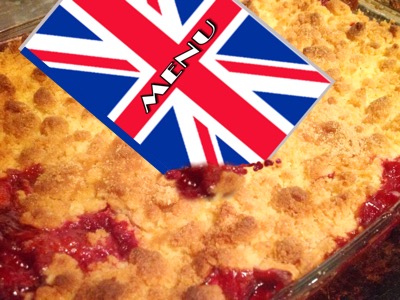 Great British Menu is a BBC television series and competition that has been running since 2006. The aim of the game is to find chefs who can cook food worthy of being served at a banquet.

One of the most fascinating aspects of the show is the formulaic way the competition plays out.

When first broadcast, there are five half-hour programmes each week, and each week features chefs from a different region of the UK. On Mondays, the chefs cook a Starter, Tuesday is the Fish Course, Wednesday is the Main Course and Thursday is the day for preparing a Dessert. On Fridays the meals are cooked for a panel of judges.

The semi-final shows are an hour long. The chefs who were selected in the regional heats all cook their food, making improvements and adjustments to the dishes as required based on the critiques from the heats. Again the Starter features on Monday, and so on. Each chef is assigned a score by the panel of judges (and from Series 8 the food has also been scored by the other semi-final chefs). The chef with the highest combined score for a course is the one who will cook that dish at the banquet. The final programme in the series presents the banquet and shows how the chefs get on as they cater for all the guests.

Each programme in the series also has a prescribed format. In the regional heats, the contestants bring ingredients in and the judge quizzes them about their plans. Then they all start cooking in the kitchen, accompanied by music that builds the tension as the chefs work hard to create their culinary masterpieces. There is some rivalry, as each chef is keen to succeed, but it is friendly rivalry - if someone is struggling to prepare everything they need for their turn with the judge, someone else is generally willing to lend a hand. When it is judging time, we see the judge striding authoritatively towards the kitchen down a corridor lined with photographs of the contestants.

Previous series are repeated on channels such as the Food Network. Two half-hour episodes generally air on the same day, filling an hour slot, so more than one heat runs each week. The hour-long programmes appear in order after that.

Each series has a theme. This means that the chefs don't just need to prepare perfect dishes that please the palates of the judges, but they also need to include an element of theatre that links the dish with the theme and makes the meal worthy of appearing at the banquet.

Royal themes often feature, such as celebrating the Queen's birthday. This leads to the dishes having a British aspect to them, including Union Flags in the presentation and featuring traditional foods such as pork pies or Coronation Chicken (in a fancier form, of course).

The ninth series commemorated the 70th anniversary of the D-Day Landings in World War II. The chefs included the stories of their relatives in their dishes, for example making family recipes but updating them for the competition, or providing a modern twist on ration packs. Theatre was provided in various ways. Photographs and letters from relatives who served in the military were incorporated into the presentation; bowls occasionally included smoke that was released when the judges lifted the cover from the dish; sauces were frequently served in hip flasks; and sometimes even a gramophone was brought in, playing recordings of wartime sound effects or veterans speaking, to add extra atmosphere while people ate.

Series 10 commemorated the 100th anniversary of the Women's Institute (WI). A number of dishes in this competition featured 'Jam and Jerusalem', of course, but other interpretations of the brief considered the wider activities of the WI, such as charitable work and promoting women's rights. Sadly, given the topic, relatively few women participated in the series, and all the chefs who won places in the banquet kitchen were men.

The judges who oversee the weekly menu and decide who is to cook their meals for the judging panel are well-known chefs with strong track records - for example they may have been awarded a Michelin Star (or two). From the fifth series onwards, the weekly judges are successful chefs from previous competitions, so they bring their experience of the competition to the table as well as their knowledge of gastronomy.

The weekly menu judging also follows the same format each time. The chefs prepare two plates of food, one for the judge and one for their fellow chefs. The other competitors try the food in the kitchen and make comments while the judge and chef try the food in another room. The judge always asks searching questions like, 'Do you think the langoustine is cooked well enough?' (giving the impression that it isn't well cooked) and, 'What score would you give yourself?' (which leads to interesting psychological comparisons between bold contestants who say, '9 of course', and others who are less self-confident, saying 'I hope to score more than 5'). However, the judges don't give anything away until the end of the programme. Once all the dishes have been tested, the judge talks about each one, generally making positive comments first, before the suspenseful 'However...' introduces the negative comments. Scores are then assigned, and the details for each course are written on blackboards at the back of the kitchen.

The Friday judging panel consists of Prue Leith (who founded Leith's School of Food and Wine), Oliver Peyton (who owns several restaurants - notably his company provided catering in Kew Gardens and the British Library until the contracts were terminated in 2016) and food critic Matthew Fort, plus a guest judge who is to attend the banquet and so links the judging to the theme.

Early series featured chefs who were already well known, including Anthony Worrall-Thompson and Gary Rhodes. Michael Caines, the co-founder1 of the ABode chain of hotels and restaurants, appeared and Marcus Wareing, who gained fame on Gordon Ramsey's show Boiling Point and went on to become a MasterChef Judge, presented his dessert course at the banquet to celebrate the Queen's 80th birthday.

Other chefs have gained fame through appearing on the show. Contestants may be chefs who work for experienced people such as Marcus Wareing, or they may already have Michelin Stars themselves. Lisa Allen was the first woman to cook at the banquet, providing the starter in the fifth series, Emily Watkins won the fish course in the ninth series and returned in Series 10 as one of the weekly judges. Michael O'Hare made a splash on the show, with his rock star looks and fascinating food - his dish for the WI banquet entitled 'Emancipation' was a work of art as well as a radical interpretation of fish and chips. He returned as a judge in Series 11. Tom Kerridge won twice, presenting a main course at the banquet in the fifth and the sixth series. He has made more television appearances since, including a BBC Top Gear sketch where he had to cook a meal in a car while being driven to a restaurant.