Eiffel 65 - the Band Content from the guide to life, the universe and everything 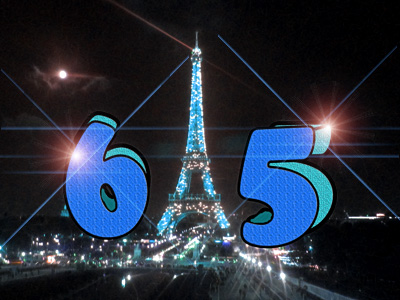 This is a lyric to the most popular song by Italian Europop dance group Eiffel 65. Though it perhaps would be somewhat unfair to call them a one-hit wonder, this group had one incredible number one hit in 1999, followed by a top-five song 'Move Your Body' the following year. The group disbanded in 2005.

The group consisted of three Italians:

The group met in Italy through Bliss Corporation, a music recording company formed following the success of Italian Eurodance group Bliss Team (1992-98) whose record label was called BlissCo. Bliss Team consisted of Jeffrey Jey, Roberto Molinaro and Domenico Capuano, and enjoyed some chart-topping success in Italy. When Bliss Team split up, Jeffrey decided to form a duo with Maruizio, although later Gabry was included when they realised they needed a mixer.

When they began recording their first song, Maruizio requested, 'Come up with strange lyrics'. They decided to use a computer to choose their name, and it randomly picked 'Eiffel'. When they got their label copy back it read Eiffel 65 by mistake as part of a phone number had inadvertently been scribbled next to their name. They kept the number in, feeling that it was meant to be.

By far Eiffel 65's biggest success was 'Blue (Da Ba Dee)'. The idea for this song's lyrics came from a fictional character that Jey created called Zoroti. Jey described his lifestyle and tastes by saying:

I came up with a colour, a colour I thought described the way he saw things. We decided to choose a colour that reflects someone's lifestyle. You know, what car they buy, how they choose their girlfriend, and how they see life.

Lobina came up with the 'Da Ba Dee' refrain, and the word 'Blue' is sung 25 times during the song, with Jey's voice distorted electronically through the use of a vocoder. 'Blue (Da Ba Dee)' was released in April 1999, featuring a music video in which computer-generated  blue  aliens kidnap Jey in the middle of a concert.

When 'Blue (Da Ba Dee)' was originally released, it was not on sale in the UK. Yet there has long been a tradition of songs popular abroad in Continental Europe during the summer holidays to get stuck in the heads of Brits holidaying abroad and then do well in the UK chart when they return in late summer/early autumn1. It was only when the song entered the top 40, reaching 39 on the Official Singles Chart based on import sales alone2, that the song was given a UK release in September. It then knocked the Vengaboys' 'We're Going To Ibiza' off the top of the chart to stay at number one for three weeks until replaced by 'Genie In A Bottle', the debut single of Christina Aguilera.

In fact, 1999 was an unusually European year in the UK chart. In addition to British, Irish and American acts that normally dominate the UK's music scene, Continental number ones included 'Flat Beat' by Mr Oizo, the Vengaboys' 'Boom, Boom, Boom, Boom!!' and 'We're Going To Ibiza', ATB's '9pm (Till I Come)' and Lou Bega's 'Mambo No 5'.

'Blue (Da Ba Dee)' was a mega hit! It was a number one hit worldwide, including Australia, Austria, Canada, France, Germany, New Zealand, Switzerland and Sweden as well as the UK. In fact, far from being blue, the song was triple-platinum in Australia and Sweden, double-platinum in Switzerland and platinum in Britain, Finland and New Zealand. In Britain it became the last single of the 20th Century to sell over a million copies, and with sales of 1.07 million was 1999's second best-selling single after Britney Spears' debut '...Baby One More Time'. The song curiously only reached number three in Italy but was a top ten hit in America.

The song's success was perhaps helped by the unclear 'da ba dee da ba dye' lyrics in the chorus. These inspired many theories that the lyrics were actually not what they were reported to be. Alternative suggestions included phrases such as 'I'm blue and in need of a guy', 'I'm blue if I were green I would die' and even 'I'm blue in Aberdeen I want to die'.

As the song is so distinctive and memorable, it is often used as background music in films set in 1999. Perhaps most noticeably it was included in a flashback scene in Iron Man 3 (2013), after which the song briefly re-entered the UK's Top 40 chart. The song was also covered by Crazy Frog in 2006, but the less said about that the better...

Europop and Beyond Blue

Eiffel 65's next single was 'Move Your Body' in early 2000. Though it wasn't as big as 'Blue (Da Ba Dee)' it was still a successful hit, reaching number one in Australia, Austria and France and doing better than their debut in Italy by becoming their first number one in their home country. It was only a number three in the UK's chart. Their third single, 'Too Much of Heaven' was another number one in Italy, but failed to reach the top ten anywhere else. From 2000 to 2004 the group released a further 13 singles, none of which enjoyed any international success although three just made the top ten in Italy.

They had released their first album, Europop in 1999. All the songs on it were sung in English, and it sold over two million copies in America where it reached number four in the US album chart, though was outside the top ten in the UK. This included their greatest hit, in both original and extended edition, as well as 'Move Your Body' and 'Too Much of Heaven'.

The second album, Contact!, had a more synthpop feel and was released in winter 2001. Their third album, Eiffel 65 (2003), was predominantly in Italian although a special edition released in 2004 featured versions of the songs in English. Neither of these albums troubled the top ten of any territory.

In 2012 Eiffel 65 reunited, initially for an Australian tour although afterwards they confirmed they planned to create new material. In April 2016 they announced the forthcoming release of a new single. This, called 'Panico' in Italian and 'Critical' in English, was released in June 2016 but failed to chart.