How the Lady of Justice Got Her Groove (and Her Arm) Back Content from the guide to life, the universe and everything 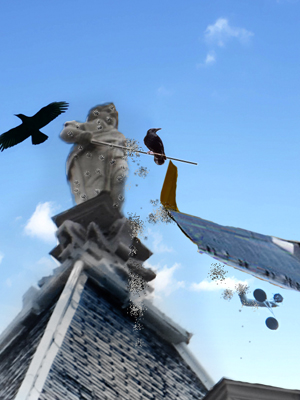 With all the information available on the Internet, 21st-Century citizens may be forgiven for thinking that most, if not all, historical quibbles have been solved – or if they haven't, they could be, if people just took the time to check it out. Unfortunately, this is not true. As the early computer programmers used to say, 'Garbage in, garbage out.' Believe it or not, there are some things we may never know. Why? Nobody thought to ask at the time, or nobody wrote it down, or some domestic terrorist burned down the hall of records.

It is for this or similar reasons that we will probably never be able to say for certainty who shot John F Kennedy, whether this or that (male) historical figure actually tried to evade danger by cross-dressing, or how Intercourse, Pennsylvania got its name.

Or, for that matter, how the Lady of Justice statue atop the Clarion County, Pennsylvania courthouse lost her arm.

How the Lady Got Up There

The Lady of Justice statue is nine feet eleven inches high and stands atop the Clarion County Courthouse, an imposing 213-foot (with statue) Queen Anne structure1. The courthouse, complete with statue, was built between 1883 and 1885 at a total cost of $126,936. That was fairly expensive, but the county urgently needed a new courthouse, as the previous one had burned down and they were holding court sessions in the Methodist church. The Methodists probably wanted their sanctuary back.

Clarion County had bad luck with courthouses. The first, built in 1843, burned down in 1859 due to a faulty flue and the inability of fire equipment to force water up to the second floor. The insurance company paid $7,000. The second courthouse, completed in 1863 (a war year), cost a total of $17,200. This is the one that burned down in 1882. Once again, fire broke out upstairs. Again, no luck with the fire hoses. This time, the insurance company coughed up a whole $25,000.

Now the county had a fine new building with a tall clock tower and a suitably dignified statue on top. Nobody paid too much attention to the statue at the time, because the county was too busy feuding with the builder, PH Melvin, who claimed he only defaulted on the deadlines because the county commissioners had failed to keep up their end of the bargain, requiring him to change brick suppliers, etc, and besides, all architects are idiots. So we have little information on the Lady of Justice. In fact, she was thought to be made of iron, which is why they weren't really sure how much she weighed. This made things tricky a century later.

How the Lady Came Down for a While

In 1981, Clarion decided to renovate its historic courthouse. This time, the winning contracting bid came to a whopping $370,278. Ohio workmen reshingled the roof, cleaned the brickwork, replaced and recaulked the windows, put a new glass on the clockface, refinished doors, and reinstalled steps. The result was pleasing, but what brought a radio crew all the way up the highway from Pittsburgh was the removal and repair of the Lady of Justice.

The statue turned out to be made of zinc rather than iron, and to weigh a relatively slight 125 pounds. However, the poor Lady had sustained serious indignities in her century-long sojourn atop the clock tower. For one thing, her arm, with the scales of justice, was... well, missing. According to official sources:

Rumor has it that a small airplane hit her arm and scales a few years ago causing the statue considerable damage.

'Rumor has it'? Seriously? 'A few years ago'? When? Did no one notice this at the time? How does an aeroplane strike a statue in the middle of town, commit vandalism on public property, and not even attract comment, let alone howls of outrage and a hefty fine?

And then there were the bullet holes - 25 of them. How did they get there? The official source merely states that 'she was quite weathered'. D'you think? Perhaps the official historians felt that 25 bullet holes in the highest-placed object in town were not particularly noteworthy in a county known for its energetic participation in all the hunting seasons: deer, of course, but also bear, elk, rabbit, turkey, fox, groundhog (except on Sundays), quail, grouse, opossum, porcupine...

But come on, even crows ('July 1-April 9, on Friday, Saturday and Sunday only. No limit') are unlikely to present inviting targets atop a 213-foot clock tower. Shooting at the statue is just showing off2.

Be that as it may, the holes were repaired, the scales of justice replaced, symbolic value restored, and the 'weathered' bits patched up with pewter-shaded fiberglass. The Lady was now a bit heftier: she came down at 125 pounds, but went back up at 250.

1213 feet is imposing in Clarion. There is nothing remotely as tall in the town centre, which mostly consists of two-storey buildings.2Those who believe that ordinary laws prohibiting the discharge of firearms within a town's limits should protect the courthouse are invited to parse the legal provisions at their leisure, possibly with the help of a Philadelphia lawyer.