The Pinyin System - How to Pronounce Mandarin Chinese Content from the guide to life, the universe and everything 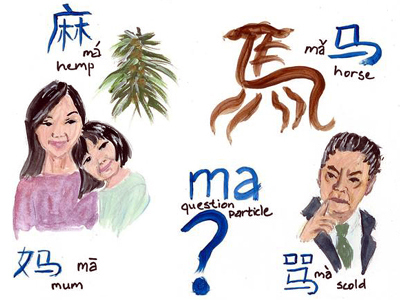 Mandarin Chinese, known in Chinese as Putonghua ('poo-tong-hwah', literally 'common speech'), is the official language of the People's Republic of China, and is the first language of more than 50% of the population. With more than 900 million native speakers, it is the most common language in the world as a first language, and has almost three times as many speakers as the next most common language, Spanish. There are other types of Chinese - Wu, Hui, Gan, Ziang, Min, Hakka, Yue (Cantonese) and Ping are spoken in the southeast of the country, while Jin is spoken in a small area in the northwest. These are generally referred to as dialects although they are sufficiently different that speakers of different dialects wouldn't necessarily be able to understand each other. In the very north of the country and in most of the west, unrelated non-Chinese-family languages are spoken such as Mongolian, Tibetan, Uyghur, Kazakh and Kyrgyz.

In the rest of this entry, the language will be referred to just as 'Mandarin' rather than 'Mandarin Chinese'. When we say 'Chinese', we mean all the Chinese family of languages.

The consistency of Mandarin over more than half the country compared with the large number of dialects of Chinese in the southeast is thought to be because of the terrain - the flatness of northern China allows for easy travel and migration; people brought the language with them. In southeastern China it is very hilly so people didn't move around as much and dialects arose.

Chinese is written down using a complex system of about 4,000 Chinese characters but there are also a number of ways of writing the language in the Western alphabet. The most common one is known as 'pinyin'. It is the method favoured by the governments of Mainland China, Taiwan and Singapore. Pinyin uses all the letters of the English alphabet except 'v', but some of the letters don't correspond to the same sounds as in English so there are some surprises. Pinyin also uses four accents to indicate the four tones of Mandarin, which are an important part of the language.

Pinyin was introduced by the government in the late 1950s with the intention of eventually replacing the complex Chinese character system, which is a huge barrier to literacy. This attempt appears to have had limited success. While all schoolchildren learn pinyin, nobody seems to use it. Street signs are written in both pinyin and Chinese characters but menus in restaurants, signs over shop doors and informative notices all still use only Chinese characters.

It's still worth learning pinyin, if only to learn how to pronounce the place names. This Entry provides a few useful phrases as examples. There's a bigger collection of phrases, with a rudimentary description of the pronunciation, in the Entry Handy Mandarin Chinese Phrases.

Chinese has some subtleties of pronunciation which won't be easy for English speakers to even hear, never mind to pronounce, so this Entry will first present a simplified guide which ignores these features, and then will explain them for those who are interested. Don't worry, you'll get by with the simplified version.

Mandarin is quite easy to pronounce for English speakers, much easier than pronouncing French, Danish or most of the Eastern European languages, because virtually all the sounds of Mandarin are also sounds in English. Admittedly, the tone system takes a bit of getting used to, but it is not actually difficult.

For the purposes of this simple guide,

Mandarin has only six or seven vowel sounds (as compared with the 11 or 12 in English) so it is straightforward.

While Mandarin doesn't allow combinations of consonants, it does combine vowels. To pronounce a sequence of vowels, just say the sounds of the individual vowels in the order they are written:

All Chinese languages are tonal - the pitch and the way it changes affect the meaning of each syllable. English uses tone to indicate things like questioning or surprise. You didn't know that? You did know that! Chinese is more basic - the tone of each word is a built-in part of the meaning of the word.

For example, the word ma can mean five different things depending on which tone is used. This is illustrated in the following table.

Mandarin has five tones, or in many descriptions it has four tones plus a neutral tone. There's a technical reason for saying that the neutral tone is not a fifth tone, but for our purposes we can treat it like one.

The most complicated of these is the third tone, known variously as the low or dipping tone. This is because it varies depending on what other syllables are around it:

The third tone is often accompanied by the gravel voice known as 'vocal fry'. You'll hear this in South Californian speech - a sort of croaking sound which accompanies low-pitched speech. The Kardashian Family provides good examples of this. Using this croaking with the third tone is a way you can tell it from the 'falling' tone.

Some examples of the third tone:

Wŏ - means 'I' or 'me' and is normally pronounced with a low tone.

Nĭ hăo - means 'hello'. Each syllable is a third tone, so the first is pronounced rising, and the second with a low tone.

You'll get by with the above pronunciation guide, but if you want to improve your pronunciation and attempt to sound even vaguely like a native, you'll have to master some subtleties.