Scouse - a Recipe Content from the guide to life, the universe and everything 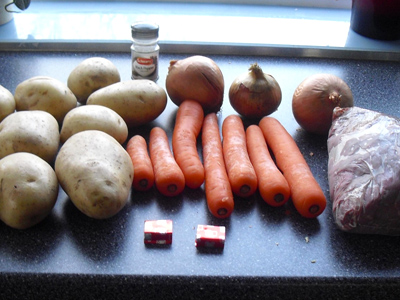 Global Scouse Day takes place on 28 February each year and celebrates the food called Scouse, which gave its name to the people of Liverpool in the UK. In honour of that day, here is this Researcher's recipe for the dish.

This recipe provides four good-sized portions of Scouse. The recipe can be scaled up - more people could be served, or extra portions could be kept in the fridge to reheat and enjoy within three days. The dish is also suitable for freezing.

Put all the ingredients except the stock cube and pepper into a large saucepan or soup pan and add enough cold water to just cover everything. On the hob, bring the water to the boil then cover the pan and turn the heat down to a simmer. Simmer for 3 hours and stir it every hour. Then add the stock cube and pepper and simmer it for 1 hour, stirring it every 20 minutes.

After that, if the broth is still thin, raise the heat to boil the mixture fast until the sauce thickens up. If the sauce is already thick, the Scouse is ready. Serve it in a soup bowl with a side dish of pickled red cabbage and a bread roll to mop up the gravy.

Lamb can be used instead of beef, or a mixture of beef and lamb - a lamb stock cube would be used in that case.

Some people prefer pickled beetroot as the side dish rather than pickled cabbage - or even some of each.

Salt and pepper should be available on the table in case anyone wants to add more than is already included in the recipe.

The dish Scouse is linked to the similar-sounding Lobscouse which is popular in North Germany and Scandinavia. Lobscouse travelled to Liverpool in the 18th Century when the city was a busy port. The dish gained great popularity in Liverpool, being nourishing but relatively cheap and easy to cook, so it went on to become the name of the city's dialect and also led to the people of Liverpool being known as Scousers.

1This Researcher is a posh Scouser - other cuts of meat could be used.2Choose a floury variety such as King Edward, that will 'lob' (disintegrate to thicken the sauce).