Death on The Nile, 1155 BCE Content from the guide to life, the universe and everything 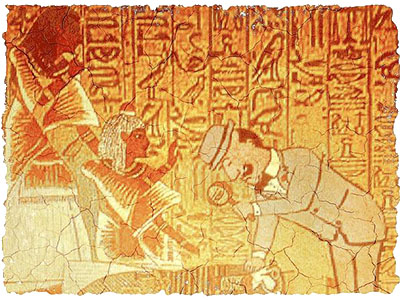 From the ancient police blotter:

The Time: 1155 BCE.
The Place: Thebes, Egypt.
The Victim: 65-year-old Ramesses III1.
Occupation: Pharaoh.
The Accused: Queen Tiye, the couple's son, Pentawere, and numerous co-conspirators from the royal harem, both male and female.

The story you are about to read is true – at least, as true as the archaeologists and forensic experts can make it. Many of the names have been changed in an effort to obliterate these miscreants from the Afterlife, as Ra  spits in the general direction of regicides.

Read on for the crime of the millennium – not this millennium, the second BCE.

In June 1886 Gaston Maspero, the head of the Egyptian Antiquities Service, was busy unwrapping mummies. It was hot, and he had a lot of kings and queens to catalogue. They'd turned up only a few years before, in a surprising find at Deir el-Bahri, near the Valley of the Kings. So far, Maspero wasn't looking at anything he hadn't seen before: just dead pharaohs and their kin, desiccated and faintly smug.

The next mummy, though, gave the Frenchman the shock of his life. The fellow had obviously died in agony. His head was thrown back, and his mouth open as if he'd screamed out his last breath. In addition, his hands and feet were bound. What madness was this?

All those who saw him first hand thought that [he] looked as though he had been poisoned. The contraction of the abdomen and stomach, the desperate movement with which the head is thrown back, the expression of excruciating pain spread over the face hardly allow for any other explanation.

Other experts disagreed. One said he'd been asphyxiated by being buried alive, another, that he'd been strangled. Most thought this smacked of violent death, although a later anatomist shrugged this off, and said any body might fall into this pose without the passing's having been untoward. But the puzzle remained: who was this ancient Egyptian? Why was he bound, and wrapped in a goatskin, anathema to Egyptian sensibilities? And why was his improperly mummified corpse interred in a plain, unmarked wooden coffin? What was going on here? 'Unknown Man E' became one of the mummy mysteries – and stayed that way, until much later. More modern research, however, has pieced together a hair-raising story, ripped from the headlines of the ancient past.

Ramesses III probably wasn't the most popular pharaoh who ever lived. After all, he was the subject of the first labour strike in history. Plagued by foreign invasions and domestic economic problems, Ramesses' reign was not a prosperous one, although the steles and monuments put a brave face on things. Small wonder, then, that there was trouble brewing in the harem. Tiye, though only a secondary queen, was convinced that her son, Pentawere, ought to be the next pharaoh, instead of principal queen Tyti's son Ramesses. Tiye had allies, too: other influential harem ladies, their relatives in the world outside the palace, and some councillors who served as handy go-betweens. Among them, a plot was hatched.

The plan was to assassinate Ramesses III and his son Ramesses, the heir apparent, while stirring up a revolt throughout Egypt in favour of Pentawere. They had some armed support, of course, but this was not enough. After all, this was Egypt.

What would a good conspiracy be without some magical help? The lead conspirator, a chamberlain known as Pebekkamen, enlisted the aid of a sorcerer. It was best to leave these matters to the professionals.

He began to make magic rolls for [hindering] and terrifying, and to make some gods of wax, and some people, for enfeebling the limbs of people; and gave them into the hand of Pebekkamen...
– The Rollin Papyrus.

The wax figurines might have helped the conspirators get past Pharaoh's guards: somebody slit Ramesses III's throat so severely that the marks were visible to a CT scan three millennia later. Unfortunately for the plotters, the magician must have slipped up somewhere. Ramesses IV not only survived the attempt, but took charge, rounded up the rebels, and appointed a 12-man commission to try them all. They were found guilty and executed. Prince Pentawere was 'permitted' to commit suicide – at least, that's what the records say, and they were sticking to the story.

Being 'allowed' to commit suicide was being let off easy. Most of the rest of the conspirators were burned alive, their ashes scattered to the four winds. In addition, the protocols of the trials do not even mention their real names: instead, they are called things like 'Pabekkamen: the blind servant', or 'Panik: the demon', or 'Mesedsure: Ra hates him'. This wasn't just a way to express disgust over the threat to public safety. It was important as a way to blot out the memory of these people. In that way, they couldn't possibly pass over into the Afterlife and bother anyone there.

In other words, they were being deleted, with extreme prejudice, from this or any other universe. Which might be why nobody can figure out what happened to Queen Tiye.

Those harem women must have been dangerous. The judicial papyri also record that even during the trial, some of them involved the officers and even a couple of the judges in heavy partying. They were probably hoping to buy leniency by showing them a good time. However, they were found out, and one of the partygoers turned state's evidence in a desperate plea bargain. Small wonder: the others had their ears and noses cut off. Jury tampering was serious business in those days.

How Do We Know All This?

One way we know about this ancient crime drama is that the trial records were preserved in the Turin, Rollin, and Lee Papyri. Sometimes we're glad for papyrus thieves – at least, if they sell to the right collectors. Barring a good court reporter or sob sister, this is as close as we can get to the juicy details.

Ramesses III got a decent burial. They even put an Eye of Horus amulet in his throat wound, to help him along to the next world. And unlike his ancestor Ramesses I, he even stayed put in Egypt after death. But Egyptian archaeologist Zahi Hawass and others have been busy with their CT scans and genetic tests. They have determined the following:

The moral of this story is obvious: crime does not pay, neither in this world, nor the next. At least, not if the pharaohs have anything to say about it.