Planxty Content from the guide to life, the universe and everything 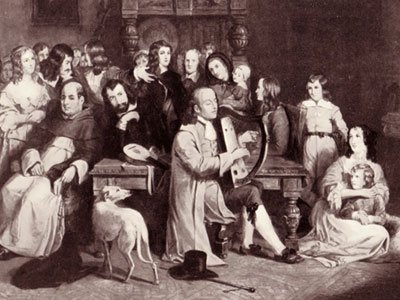 Planxty is famously the name of an Irish band of the 1970s that did new things with traditional music. But what does the name mean, and where did it come from?

The word was first used in the titles of tunes by the harper Turlough Carolan1, who lived from 1670 to 1738. In the traditional manner of Irish harpers, he travelled around Ireland on horseback, guided by a servant also on horseback, stopping for short or long stays in the various country houses of the wealthy, whom he would entertain with songs and tunes on the harp. This tradition was of unknown antiquity, but it was declining in Carolan's time; he was one of the last of the itinerant harpers, and the last one to compose music. By 1800 or soon after, the old-style Irish harp, with brass strings plucked using the fingernails, was out of currency. Fairly soon after that a new Irish harp was invented, with gut strings and a mechanism for altering semitones, as on the concert harp, and played in a similar manner, without engaging the fingernails. This was cultivated as a desirable accomplishment for young ladies: a world apart from the old professional harpers.

Most Irish harpers had been born blind, and then became apprenticed to a master harper at a young age2. Carolan was different: he only became blind at the age of 18, from smallpox. As a result of his late start, his skill in harping was not his strong point; but he made up for that in the fertility of his composing genius.

A harper was a valued and respected member of society; like the strolling players described in Hamlet, no-one wanted to have a bad reputation with a harper. Carolan was on friendly terms with Dean Swift3 whom he met on the few times he ventured into the capital.

There are 213 tunes published in Carolan's collected works; a further 20 songs are listed but survive as verses only, the tunes being either lost or duplicated in the 213. We don't know how he accompanied them; 18th-Century transcriptions were printed with conventional added bass lines, but these are not convincing as a record of the way Carolan played4. The published bass lines are sparse, unimaginative and suggestive of the continuo tradition of general European usage rather than any particularly Irish or harpish style. Present-day scholarly editions omit these and print only the melody line.

Of these compositions, many were labelled 'Planxty'5. It seems to have been a term invented by Carolan himself, and applied to a lively instrumental piece generally in six-eight time but not as fast or as regular in phrase-length as a jig. So we have 'Planxty Burke', 'Planxty Crilly' and so on, named after various patrons of Carolan.

There is one single clue to the meaning of the word. Carolan used it in a song he made for his patron George Brabazon:

Him, jam! planxty, merriment,
Sing, dance, drink his health about!

From this we can surmise that the word was not Gaelic: Carolan's biographer and editor Donal O'Sullivan6 says 'it has not a Gaelic ring about it'. Nobody had used it before Carolan, and its context was a verse in English. Some early publishers gaelicised the word, spelling it plancstaí   – but of course spelling is no evidence for the intentions of a blind man of the 18th Century.

So what does it mean? It occurs in the names of primarily instrumental pieces, though some of them were also made into songs by Carolan. It is associated with merriment; despite its resonance with the word 'plangent', it has no dirge-like or lamentational connection; but who knows whether the Latin verb 'plangere', meaning 'to strike' may actually have been the source?

Scholars have been reticent about guessing at a possible meaning for 'planxty', but it seems credible to this Researcher that it suggests onomatopoeically the sound of brass harp strings being struck by the lively fingernails of a skilful player.

1His name in Irish is Toirdhealbhach Ó Cearbhalláin, but he was known to his friends as Carolan rather than O'Carolan.2This was an honourable profession, and a prized opportunity for any boy born blind and showing sufficient aptitude. Learning to play at a very young age, Irish harpers had built up an international reputation for their skill, as reported by Giraldus Cambrensis in the 12th Century.3Jonathan Swift, Dean of St Patrick's Cathedral Dublin, and a friend of George Berkeley, is now best known as the author of Gulliver's Travels.4Irish harpers were generally unenthusiastic about their tunes being notated; when they were it was invariably for playing on other instruments.5The number of Carolan's planxties is uncertain, since later scholars have removed the term from many tunes that were tagged with it since Carolan's time.6Carolan: the life, times and music of an Irish harper, Routledge and Kegan Paul, 1958.