The Trick that Fooled Einstein Content from the guide to life, the universe and everything 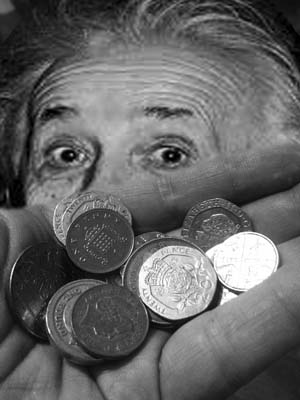 Do you have some loose change in your pocket? You do? Good!

Now, I'm going to tell you exactly how much change you have. Impressive, yes?

And it works every time!

Probably the greatest mind of the 20th Century, physicist Albert Einstein is said to have seen a version of this conjuring trick performed at the Savoy Hotel in London. The magician was Edward Doe – billed as the son of spiritualist Helen Duncan – who performed under the stage name of Al Koran.

In his trick 'Jackpot Coins', instead of counting loose change in someone's pocket, Koran instead had a clear glass bowl of coins on the table in full view of the audience. He invited someone to take a handful, as he had just done, then made three similar predictions: 'I have as many coins as you', 'I have six more than that', 'I have enough left to make your total up to 15 coins'. All three predictions turned out, of course, to be correct.

The story goes that Einstein called Al Koran over to his table and asked him earnestly where the extra coins had come from, and whether they were from up his sleeve. The magician performed the trick again, and then, Einstein still no wiser, confessed to the great man that he had been fooled not by logic but by the wording of his predictions.

The trick, as presented at the start of this Entry, will always work so long as the magician has at least 50 pence more change in his pocket than the subject has. The magician just needs to know how much is in his own pocket – he counts it beforehand. In the example at the start, the magician knows he has exactly £4.67 in his pocket before he takes to the stage. He mentally subtracts 50p from this to give £4.17 – the amount he quotes in his third prediction.

The only pitfall for the magician is if the subject turns out to have an unexpectedly large amount of change, but at least this would be determined before the critical third prediction, and magicians would have an armoury of techniques to avoid these situations or to divert the audience should it happen. Clearly, they should make sure they are carrying an above-average amount of loose change to start with.

Did It Really Happen?

In his writings, Koran made a great deal of the encounter with Einstein, but there appears to be little evidence to corroborate the story. In his Cardopolis blog, writer David Britland suggests it is unlikely, as Einstein visited the UK only twice – in 1931 and 1933 – and at this time Doe had not yet adopted the stage name Al Koran; he was employed as a hairdresser at a different hotel.

For all of that, the trick is a fine example of one which uses a simple mathematical identity, but which through some clever obfuscation convinces the audience that some magic has to be involved.

Al Koran found fame and fortune in the United States, regularly appearing on TV, and died in 1972. Maybe his greatest illusion was to convince his future audience that he'd fooled Albert Einstein. Now that would be magic.