The Art of Cold Reading Content from the guide to life, the universe and everything 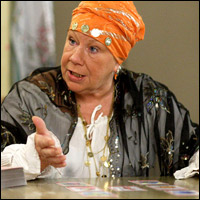 While there are many people in the world who genuinely believe they can see the future or speak with the dead and seek to help others using their perceived gifts1, there are just as many believe no such thing yet successfully trick vulnerable people daily into believing they have such abilities, often taking their money. One such gift is 'cold reading'. If you've watched any of the growing number of psychic chat shows on the television, chances are you've probably seen this 'psychic phenomenon' in action.

According to the principles of cold reading, any one of us can successfully pass ourselves off as a medium or psychic. It is a human characteristic to hear what we want to hear and fill in the blanks ourselves, forgetting the bits we don't like or which are 'wrong'. Cold reading exploits this trait.

Several techniques tend to be employed by the cold reader to give the best effect. They use general statements that could apply to anyone. For instance: 'I sense a strong woman in your life' or 'you hide your pain behind a cheerful smile'. They then use the person's response to gauge where to go next.

They use what are known as 'hot button' topics to start with, such as relationships, work and death. These are the ones most likely to give the so-called psychic a 'hit'. They may also look at clues such as a person's age range, physical build or accent to make more generalisations. Any information the person offers will be given back to them in such a way that they then believe they are genuinely hearing from a lost loved one, or that the cold reader is indeed truly psychic.

I guessed that she lived in the country, and probably near some horses. I said to her: 'My spirit guide Gaston is telling me about something to do with horses, and something to do with your mother.' She told me that she had a dream the night before about her mother driving a pick-up truck into some water. I said: 'Ah, that's what Gaston must be talking about - a horseless vehicle. Remember, he died during the Napoleonic Wars and doesn't know what a truck is.' When that woman looks back on that reading, she'll think that I told her exactly what she dreamt the night before. That's how she'll remember it. All I did was mention horses and her mother. She did the rest. Cold readers keep things nice and ambiguous and let the person do all the work.
- from Colin Hunter's Cold Reading: Confessions of a 'Psychic'

Cold reading is, without doubt, very versatile. It can be used for many different kinds of readings, including tarot, astrology, palmistry, psychometry, mediumship and clairvoyance. There are of course those who do not seek to deceive others intentionally and genuinely believe they are psychic. Many may have merely learned to cold read without realising it.

It is now widely believed that the famed international medium Doris Stokes, among others, was merely a highly skilled cold reader - whether she believed it herself or not. Modern magician Derren Brown has presented TV shows where he intentionally cold reads to show how it works. There is much debate about the alleged abilities of other popular modern-day psychics such as John Edwards and Colin Fry.

Cold reading, or similar methods of spiritual fraud, can be dated as far back as the early 19th Century. The Fox sisters, founders of the US spiritualist movement in the 1840s, were proven hoaxers. At seances Kate Fox would crack the joints in her toes to create noises that were attributed to spirits trying to communicate. Many have tried to debunk such frauds over the years, including world-renowned magician Harry Houdini who at one point offered a $10,000 reward to anyone who could show a psychic feat he could not reproduce himself with trickery. The reward was never claimed.

Other Uses of Cold Reading

Although primarily used by people who wish to pass themselves off as psychic, cold reading techniques can, and are, used in other circumstances - for instance, by salespeople, confidence tricksters and detectives. In fact, anyone wishing to gain information from another person, or just their trust, can employ the art of cold reading to do so more easily.