Harry Houdini Content from the guide to life, the universe and everything 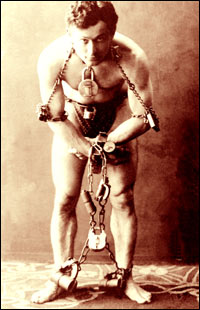 Ehrich Weiss - the real name of the escapologist Harry Houdini - was born on 24 March, 1874, in Budapest, Hungary, to a Rabbi and his wife. The large family - five sons and a daughter - moved to Appleton, Wisconsin in 1878, when Weiss was four years old, and for the rest of his life Weiss would claim this was where he was born.

Ehrich, Prince of the Air

Weiss's first brush with showmanship began with a show for his friends when he was nine years old, adopting the stage name Erich, Prince of the Air1, but it was another eight years before he became one half of The Houdini Brothers.

In the meantime Weiss and his family had a rough time, struggling with poverty and eventually moving to New York. Accounts of Weiss's life vary during these years, with tales of him joining the circus and becoming apprentice to a locksmith probably being untrue. However he definitely did join Jacob Hyman, a friend from a factory he worked in, to form magic act The Houdini Brothers - who named themselves after Jean Eugène Robert-Houdin, the most famous magician of the day. Weiss took the nickname 'Harry', possibly from his own nickname of Ehrie.

The partnership lasted two years before Hyman left, to be briefly replaced with Houdini's brother 'Dash'. Dash was himself replaced when Houdini met Wilhelmina Beatrice Rahner - Bess. Houdini married her and made her his partner in the act, which was renamed The Houdinis.

Houdini's rise to fame took several years, and during the course of it he changed his style of magic from traditional illusions to escapology, and it was probably his handcuff act that first made him famous. From there he continued the escapology theme with ever more daring and dangerous escapes.

Houdini had a great talent for self promotion, and in an age where magicians were always The Amazing, The Spectacular or The Magnificent, Houdini managed to stand out and become the most famous magician in the world.

When touring Australia, Houdini hit upon an even better way of getting publicity - he became the first man to fly a plane in Australia, buying, dismantling, transporting and then rebuilding a German biplane. It was said that he learnt to drive especially to get himself to the airfield, after which he never drove again5.

In 1918 Houdini starred in a 15-episode serial called The Master Mystery, and recognised the publicity value of starring in films. In 1921 he set up the Houdini Pictures Corporation, producing and starring in films which showcased his ability. Although Houdini's involvement in the company was short-lived6, the company itself is still afloat today - after a long period of inaction it is now producing magic-themed films.

Houdini also published many books on how he did his tricks, keeping people's interest alive by letting them a little way into his world, while increasing speculation about how the other tricks were accomplished. Even after his death his wife Bess continued to pay a publicist to keep Houdini in the spotlight.

The Man Who Fooled Houdini

In 1919 Dai Vernon7 managed to fool Houdini with The Ambitious Card. This is a trick in which a card is selected, marked and put into the middle of the deck, only to appear on the top. Houdini reputedly could not explain how the trick was done even after seeing it eight times, and for the next 20 years Vernon called himself 'The Man Who Fooled Houdini'.

When his mother died in 1913 Houdini was desperate to contact her. Spiritualism was very much in fashion at the time, and many prominent figures believed in the ability of mediums to contact the dead - including Sir Arthur Conan Doyle, who was to become a lifelong friend of Houdini's. However, upon attending meetings Houdini saw many tricks being used, and became angry at what he viewed as the exploitation of people's grief. He was to spend the rest of his life as a firm opposer of spiritualism.

Houdini eventually came to believe that no séance was anything more than trickery. He began incorporating these tricks into his act - sometimes devoting nearly half his show to a spiritualism theme, and even attending séances in disguise to expose fraudulent mediums.

Despite his anger at the Spiritualist frauds, Houdini continued to believe in some kind of afterlife. He announced that he fully intended to come back if he was able to do so, and even devised a ten word code which he gave to his wife. After his death many mediums claimed to have been contacted by him, but crucially none were able to recite the code.

Houdini's death itself is somewhat mysterious. As has already been mentioned, he did not die during the Chinese Water Torture, although he may have died as a result of a different trick. Houdini died in 1926, at the age of 52, of peritonitis from a ruptured appendix. This may have been caused by a well-meaning member of the public punching him in the stomach - Houdini was fond of showing off his ability to withstand blows to the stomach in informal settings. This time, however, he didn't have time to tense his stomach muscles, and there is speculation that the punch may have been the trigger that ruptured his appendix.

And perhaps as a final way of attracting a little more attention regarding spirits and spooks, Houdini managed to die on Hallowe'en and was buried in the coffin he used in his acts.

1Sadly, details of the act are lost to us, but you can draw your own conclusions from his title.2Do we really need to tell you not to try this at home?3If not ever.4The catch-all word for 'exotic' at the time. The trick was no more Chinese than Houdini himself.5If more people knew that perhaps it'd put to rest the joke about 'Did Houdini ever lock his keys in the car?'6Haldane of the Secret Service, Houdini's fifth film, was so poor he gave up on the cinema.7Real name David Verner.