The Listener Crossword Content from the guide to life, the universe and everything 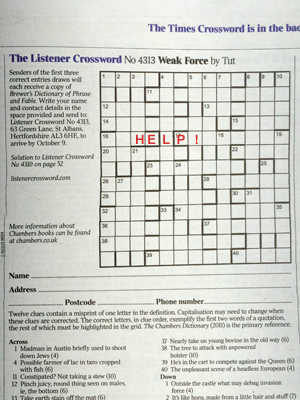 This week we start a series of crosswords for the amusement of our readers. No prizes will be offered, but any reader who sends to us, within a week of publication, the correct solution of any of our crosswords, will be entitled to an invitation to visit the BBC Studios on certain afternoons...
– The Listener, 2 April, 1930.

And so was born the weekly challenge which has been variously described as the most fiendishly difficult crossword puzzle in the English language. Over 4,000 weeks later, the Listener Crossword is still going today, confounding the brain of anyone who dares attempt it.

Yet, that makes it no less popular. Indeed, the crossword has outlasted its original publication, which closed in 1991. These days, you'll find it tucked inside the back page of the Saturday Review section of The Times newspaper.

The Listener magazine was launched by the BBC in 1929, six years after their listings publication, The Radio Times. Whereas The Radio Times was 'the official organ of the BBC', The Listener was a far more serious affair, providing commentary on and transcripts of radio shows, as well as previews of upcoming arts, literature and music broadcasts. It earned a highbrow, intellectual reputation, and attracted contributions from the finest writers of the day, including EM Forster, George Orwell, George Bernard Shaw and Virginia Woolf. It incorporated commentary on BBC television programmes after these began in 1936, but the publication's title never changed.

It was clear that any puzzle designed to challenge such an enlightened readership would need to be tough. Rewarding too – not so much in the value of prizes awarded, but in the satisfaction of having solved it. Prizes are smaller than those offered by similar competitions, yet these have had an intellectual slant. The original prize – a tour of the BBC's studios – would have been of great interest to those enthusiasts of the new medium of broadcasting. These days, reference books are awarded to winners.

What You Can Expect

For years, we have been convinced that the clues are actually coded messages from MI5.
– Lynne Truss, writing on the occasion of the 3,000th puzzle.

Puzzles are usually multi-layered, requiring more than simply filling a crossword grid. Solvers are often asked to perform tasks which modify the grid in some way, revealing a hidden goal or theme. The precise nature of these instructions may only be determined after solvers have completed the previous puzzle layer. In summary, the Listener Crossword is a curious and unpredictable mix of word puzzle, logic problem and brainteaser.

As an example, Puzzle 4310, published in September 2014, asked solvers to first complete a crossword grid, having instructed them that each cryptic clue contained within it an extra word which had to be ignored. They were told that an author appeared hidden in the completed grid in an appropriate shape – this turned out to be the author Lynne Reid Banks, written in an L-shape, in reference to her novel The L-Shaped Room. Solvers then had to locate a hidden message in the unused words of the clues, spelled out by those letters within them which followed a letter L. This message instructed solvers to draw a mathematical net on to the completed grid, which would allow it to be folded into the 3D model of an L-shaped room, with the letters of the novel's title appearing around its walls.

Sometimes, the final solution requires the solver to delete parts of the grid before submitting it. This might reveal a thematic shape in the remaining letters, for example. Puzzle 3241 in 1994 was themed on the Cheshire Cat from Alice in Wonderland. Solvers had to deduce that they needed to delete every letter in the grid, except for those spelling the word 'GRIN'.

And if all that multi-layered thematic malarkey isn't enough, the Listener Crossword's cryptic clues are among the toughest in existence, particularly because they rely on some of the most obscure words in the dictionary. These are often dialectal words – Scottish ones are common. As a result, it's almost impossible to complete this puzzle without consulting reference books, in particular The Chambers Dictionary, the default source for any words used1. These aren't the kind of puzzles you can complete on a train journey; they are designed to take up to a week to solve. The internet won't help you, particularly, but a trip to the local library could.

Variations on a Theme

The clues of most standard cryptic crosswords follow a convention. Their solution is a word which is defined somewhere within the clue, but which is additionally represented in some kind of coded way – crossword setters call this section of the clue the 'wordplay'. The clues of Listener Crosswords generally follow this pattern, but use obscure words, and often insert, remove or misprint letters, as a mechanism for storing the coded messages.

Some of these unusual clue conventions occur regularly - a few are described below. Everything the solver needs to know at the outset is indicated in the setter's instructions, or 'preamble', written below the grid.

When Belfast East Member of Parliament, Peter Robinson (later First Minister of Northern Ireland) heard in 1997 that The Times was considering dropping the Listener Crossword, he proposed a parliamentary motion in its support:

That this House recognises that the Listener Crossword, which appears in The Times newspaper every Saturday, (i) is the most challenging and imaginatively devised cryptic crossword currently published in a national newspaper and (ii) gives much pleasure to thousands of devoted solvers; notes with concern that the Editor of The Times plans to discontinue this historic crossword from September 1997; and urges him to reconsider his decision, thereby ensuring that the Listener Crossword continues to be published well into the next millennium.
– Early Day Motion 229 (1997/8), House of Commons.

Robinson is by no means the only famous fan of this puzzle. Stephen Sondheim and Leonard Bernstein would suspend their activities writing West Side Story in order to tackle the crossword.

The number who complete and send it off it each week varies according to the puzzle's difficulty, but it's normally between 100 and 500. A few more submit incorrect solutions. Not only is every entry checked, but the editor's statistician compiles records of each competitor's performance.

Unbelievably, every year a small handful of solvers complete every puzzle. The best of this hardcore elite receive invitations to the annual setters' dinner, where additional prizes are awarded.

So, why do the Listener Crossword? Simply because it's no less challenging to the mind than a snow-capped peak is to a mountaineer. You won't complete it first time. You have to hone your technique on other cryptic crosswords – Times or Guardian puzzles are ideal. You need to develop an inquisitive mind and strengthen your general knowledge.

Typically, the beginner's first achievement is to solve one of the clues of a puzzle, but have no idea where to enter it in the grid (they don't always help you with numbers). Eventually you'll find a puzzle where you can solve enough clues to have some confidence in writing them into the grid. It generally takes many more puzzles before you can fill a grid and start searching for hidden messages and themes.

When you do eventually solve a complete Listener Crossword puzzle, the feeling is little short of euphoric. Savour it – you're a member of a very small club.