Barbershop Singing Content from the guide to life, the universe and everything 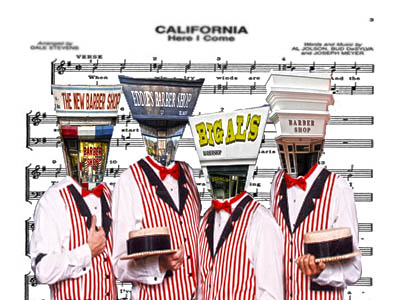 Barbershop has quite extensive lore and firm conventions of its own. Though the vocal genre goes back further, the name only has a written history of one century: it is first found in the title of a song published in 19101.

The habit of singing in barbers' shops dates back to the 16th Century if not earlier. Traditionally a cittern2 hung on the wall for the use of waiting customers, and presumably also for barbers awaiting customers. Shakespeare's friend, the composer Thomas Morley, mentioned in his Plaine and Easie Introduction to Practicall Musick a chord progression that 'walketh amongst the barbers' more commonly than any other3.

Male-voice harmony goes back at least as far as the Middle Ages, when church choirs were all-male affairs. By the 16th Century, European religious music had become so complex that it was one of the items on the list of church excesses requiring reformation4. The simplifications applied were aimed at making the words perfectly clear to listeners. This gave rise to four-part hymn-book harmony, where everybody sings the same words at the same time, and one voice carries a main melody that dominates the whole texture.

Hymn-book harmony is the basis of the barbershop style. If you take a hymn and sing the parts not in the usual way5 but giving the tune to a mid-range male voice, so it sounds an octave lower than written, you have the essential barbershop quartet. The leading voice is no longer higher than the rest, but in the middle of the texture, and is made to stand out by controlling the voices' quality. This is how it goes:

Though the origins of modern barbershop singing are strangely obscure, one family may have contributed more than others to the development and dissemination of American male vocal harmony in the 1840s: the Hutchinson Family Singers from New Hampshire. They improvised their own harmonies, and used their wide popularity to forward a political agenda. They championed temperance, women's rights, the abolition of slavery, and prison reform. Often having to cancel engagements in some American cities when mobs demonstrated in protest against these campaigns, they were made welcome in Europe when they travelled there.

It seems that towards the end of the 19th Century some less well-off students from Brown University, Rhode Island, which had a flourishing chapel choir and glee clubs, would sing hymns, carols, and popular songs in the 'hymn-book' format while on vacation, to raise money for their college fees.

It is easy to conjecture that a popular music-hall routine of the late 19th/early 20th Century may have been set in a barbershop. Two barbers banter and set the scene, two customers enter and sit for a shave, and the four burst into song, as in the musical Guys and Dolls6. At any rate, one of the first public appearances of The Marx Brothers was as a barbershop quartet in a vaudeville show7.

A society was formed in 1938 in Tulsa, Oklahoma, when O.C. Cash, a tax attorney who was a keen barbershop singer, organised a sing-in with 26 others. The event caught the attention of a reporter who sent the news countrywide; Cash improvised the name of his as yet unfounded organisation, the Society for the Preservation and Encouragement of Barbershop Quartet Singing in America. Now renamed the Barbershop Harmony Society, the SPEBSQSA spread its influence right across the United States, publishing music, providing coaching, and setting up competitions. There are associated or similar organisations in many European and Anglophone countries now, encouraging male and female quartets and choruses.

The thing that most distinguishes barbershop from other a cappella singing styles is the placing of the dominant melody in the middle of the texture, rather than in the top line. For this reason, falsetto is normal in the highest voice, rather than the high-tenor 'head voice'. Some quartets, including the professional Dapper Dans, have used a non-falsetto top voice, but if not actually frowned on, this is rare. Falsetto sounds gentler and more nebulous: just the thing to put a halo on the harmony without detracting attention from the Lead.

Apart from that, a barbershop quartet or chorus just sounds different. Part of this is in the delivery, which is expected to be polished to a high degree, seamless and so well rehearsed that they appear to be making it up as they go along – often complete with synchronised gestures.

There are always four parts, and never more8; nor is there ever any instrumental accompaniment.

The style of musical arrangements for barbershop quartets and choruses is both immediately accessible and fairly specialised. For a start, though both men and women are equally welcome to participate, they never mix voices. Female quartets and choruses use the same division of voices, one octave higher, and arrangements are really interchangeable.

The overall aim in setting a song is that the audience should hear the melody, and be aware that it is harmonised, but should not be distracted by excessive interest in the accompanying voices. To this end, dissonance is kept to a low level, and the three accompanying voices rarely sing anything more discordant than a dominant, diminished, or minor seventh9. More dissonance than that is permitted and freely used, to be sure, but it is pretty much left to the Lead voice to sound the offending note, as such a note inevitably draws attention to itself. Occasionally the Lead takes a back seat, and the prominent melody line is given to another voice, but this happens mostly as brief interjections or at climactic moments.

One special goal in barbershop singing is to keep the sound as continuous as possible. Breathing points are reduced almost to elimination, and consonants are minimalised. Tuning is of the greatest importance, and groups practise at length to pronounce their vowels identically, as this makes a remarkable difference to tuning. Tempo is extremely variable: very few songs move to a steady beat, expressive rubato being taken often to its limits, and sometimes beyond.

The choice of song is often unashamedly sentimental. Barbershop coaching stretches beyond voice production and gesture, to incorporate emotional visualisation and even smiling practice. To polish up your smile, you are advised to try it in a mirror; to keep it looking fresh, you can smile off-mirror and then sneak up on yourself (move into view in the mirror) to check how it's coming across. If this seems somewhat ghastly to you, perhaps barbershop is not your thing, but if you can go along with a little hokum, you will find the world of barbershop is full of delightful and truly welcoming people.

One inviolable rule is that all parts must be memorised. Standards in barbershop training are now very high; a song is given five weeks' rehearsal before being presented in public, with full memorisation expected by week two or three. A well-trained chorus, all making small but well-timed moves to punctuate their singing, can make a wonderful sound and a tremendous impression on an audience.

The Joys of Barbershop Singing

Barbershop is almost entirely an amateur activity. There are very few professional barbershop quartets in the world, one notable one being the Dapper Dans who entertain in various Disney resorts. Even they are not a regular quartet, though, since they must field teams of up to twenty singers in order to keep the music coming.

The amateur ethos is supported by the extreme generosity of the Barbershop Harmony Society and other organisers, who provide plenty of free sheet music, and plenty more at really cheap prices; help in the form of coaching and advice is also widely available in many countries.

Quartets are not barred from accepting paid engagements, however, and one of the most delightful experiences to be had is delivering musical valentines. A flower shop accepts bookings, and on Valentine's Day the quartet sets out to various work or home addresses, to sing to one person and hand them a rose. The effect is almost overpowering: at first the victim is mortified and wishes the ground would swallow them up as four ridiculously dressed men (or women) gaze into their eyes and beg them to 'Let Me Call You Sweetheart', but as the seconds pass and the realisation dawns that this will not last forever, the gaze is returned and the recipient's heart opens up to a maudlin but nonetheless beautiful moment.

1Play That Barber Shop Chord, words by William Tracey, music by Lewis F Muir. The chord referred to can be identified from the context as a dominant seventh on the flattened sixth of the scale, A♭7 in the key of C. Pedants call this not a dominant seventh but an augmented sixth, which is how it is spelt out in the piano score: A♭-C-E♭-F♯.2A wire-strung instrument of similar size and tuning to a ukulele.3Interestingly, the chord progression (or 'ground bass') he mentions, the Quadrant Pavan or Passamezzo Moderno, is not very different from the 12-bar blues.4The complaints, voiced at the Council of Trent, included voices singing over one another, so that different words were heard simultaneously, with final syllables drawn out into long elaborate phrases (melismas) so that the words, if they had been heard, were forgotten by the time they ended.5Soprano-alto-tenor-bass, with the principal melody given to the soprano. Earlier part-writing had favoured the tenor, hence its name (literally 'holder').6The song in question is The Oldest Established Permanent Floating Crap Game in New York, words and music by Frank Loesser (1950).7The Four Nightingales were so under-rehearsed that the embarrassment of that 1908 disaster is cited by Harpo in his autobiography Harpo Speaks as one of the reasons he remained professionally mute for the major part of his career.8Never is perhaps too strong a word. Some barbershop quartets have collaborated with others to make very successful eight-part arrangements, even of combined genders. This however is all outside the competitive sphere, where the rules are the rules.9Dissonance, loosely defined as notes too close for comfort, is necessary to give spice to music, just as conflict drives a drama. In classical music dissonance was bounded by strict rules of preparation and resolution. These rules allowed dissonances to occur between any voices, but such discords as a second-against-the-bass, common in Bach, are too spicy for barbershop, except in rare dramatic moments.