The Gentleman's Gentleman's Guide To Hot Towel Shaving Content from the guide to life, the universe and everything 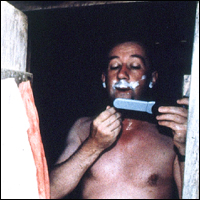 The latter half of the 20th Century brought many technical innovations which transformed the daily lives of millions. The automobile, the aeroplane, the gramophone and the television set remote control have all brought to the masses a little of the luxury that the upper classes have always enjoyed. One development which has rightly been scorned by people of breeding is the disposable razor blade. These 'safety razors' allowed the lumpen proletariat to achieve a modicum of grooming without unnecessarily cutting their own throats. Throughout this revolution for the unwashed though, gentlemen continued to be shaved in a proper fashion by their manservants with a straight razor, sometimes called a 'cut-throat razor'.

A proper hot towel shave with a straight razor is, alas, one of the few pleasures remaining in a health & safety obsessed world. The real shave is a reminder of better times. A spate of immigration to the shores of Old Blighty has thankfully heralded a return of the artisans of this craft to the country. Hot towel shaves are widely available in many large towns and cities from Turkish practitioners and are most heartily recommended. They bring a skill which was largely lost in the 1980s, when the straight-edged razor was frowned upon due to health scares about AIDS.

The tools you will need to shave your gentleman are:

Are You Sitting Comfortably?

Using a reclining chair, position your gentleman in a manner that allows him to be comfortable but which also gives easy, unrestricted access to his neck without him having to stretch. Take a clean towel and place it diagonally from his shoulder across his chest. From the side, tuck the towel into his collar from the back of his neck to the throat. Cross to the other side of your gentleman and continue to tuck the towel in from the throat to the back of the neck. Never lean over your gentleman from behind as this is impolite and likely to earn you a rebuke.

Rinse out the shaving mug in warm water and proceed to mix up a thick lather with the shaving soap, hot water and the shaving brush. Place two fingers down the side of the brush to avoid the base of the brush rattling against the mug, which is just common. Starting on your gentleman's right side, apply the lather with the brush using a strong circular motion. The object is to get the lather in between the bristles, forcing them to stand up. Hold the brush as you did when mixing the lather, with two fingers down the side. This allows you to control the bristles and avoid getting soap in the nostrils, mouth or ears of your gentleman. Once one side of the face is lathered, continue the process with the other side and the throat, taking care again not to lean over your gentleman and earn yourself a rebuke.

Once your gentleman is lathered, prepare a towel by soaking it under running hot water. Put some menthol crystals in the sink and immerse the towel briefly. Wring the towel out thoroughly and check that it is not too hot by testing it against the skin of your forearm. If it is scaldingly hot, waft it a few times to cool it slightly. Fold the towel in half lengthways and position the centre under the chin. Bring one side up to the opposite temple and repeat with the other side. This will leave a small opening for the nostrils, but will otherwise entirely cover your gentleman's face. Leave the towel in position for three minutes to steam your gentleman's face. The purpose of this is to soften the bristles and open the pores, allowing sweat to flow. The sweat will help as a lubricant in the shaving process. The lather will hold any particles of dirt in suspension. After three minutes, remove the towel a portion at a time and, using downward strokes, firmly wipe off the sweat and dirty lather. Start on your gentleman's left temple and work down to the chin, repeat on the other side and finish with the throat.

Lather your gentleman's face as you did earlier. It is important that your gentleman is relaxed for the actual shaving. Light banter and enquiries about the weather should suffice in taking his mind off the razor sharp instrument approaching his throat. Inappropriate whistling or humming of tunes such as 'Stuck in the Middle With You' by Stealers Wheel may have rather the opposite effect and should thus be avoided3.

Holding the razor firmly between finger and thumb of your right hand, begin the shaving process on your gentleman's right side. Keep the blade at an angle of around thirty degrees to the skin. The object of the exercise is to slice through the bristle as close to the skin as possible. This angle optimises the balance between keeping the blade in firm contact with the skin and actually cutting the bristles. First, using the back of the razor, wipe the lather off the sideburns to reveal the starting point. After each stroke, wipe the lather off the razor onto the heel of your left hand. Using your left thumb, stretch the skin and make long sweeping strokes downwards in a gliding, cutting stroke from the point to the heel of the razor. Shave from the sideburn to the chin, along the jawline. Stretching the skin between thumb and forefinger, shave the right side of the upper lip. Moving behind your gentleman, shave the right side of the throat and neck with upward strokes. Repeat the process for the left side of your gentleman's face. It may be necessary to pay further attention to the jawline. Using short strokes, tidy up any bristles that may have been missed.

Prepare another hot towel and steam your gentleman's face once more. After three minutes, wipe as before to remove all signs of lather. At this point, if there is any blood flowing from nicks, use the styptic pencil vigorously to staunch the flow. The styptic pencil is a wonderful instrument of torture consisting of aluminium oxide in a stick form. When applied to open blood vessels, it causes them to contract rapidly and painfully, thus staunching any blood flow. It only works on small nicks though, so count your gentleman's ears. If he has any fewer than he did before the start of the shave, apply another hot towel and leave with haste to secure a new position elsewhere. Assuming your gentleman has the requisite number of ears, it is time to administer the aftershave. Fill your cupped hand with aftershave and smartly transfer it between your hands before lightly slapping it onto your gentleman's face. Be prepared for your gentleman to flinch, gasp or lash out blindly with his fists and feet, as this stings like a lady's spite. Position yourself accordingly in anticipation of such a reaction. Once your gentleman's breathing has returned to a rate approaching normal, massage moisturising cream into his face with firm strokes.

Done correctly, your gentleman will now have a face as shining, gleaming and smooth as a baby's posterior. The temporary discomfort caused by the aftershave will be immediately forgotten as he runs his fingers over his smooth complexion. As a man of breeding, he will thank you in a cursory manner and you will of course thank him with a smug, self-satisfied smile.

1The finest shaving brushes are made from badger hair. Hair from the soft underbelly of a badger is soft yet strong and holds a surprising amount of lather. Most highly prized is the 'Antarctic Tree Badger' due to its rarity2.2So rare it isn't quite sure whether it exists or not.3In the violent and graphic movie Reservoir Dogs by Quentin Tarantino, a policeman is tortured and mutilated by a criminal wielding a straight razor to the accompaniment of this song.