'Victor Victoria' - the 1982 Film Content from the guide to life, the universe and everything 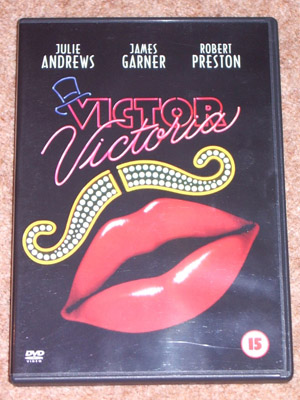 An Oscar-winning comedy with a star-studded cast, Victor Victoria is a tale of gender confusion, music, and love. The title character was superbly played by the inimitable Julie Andrews, and the film was written and directed by Blake Edwards, Julie's husband.

The screenplay was written by Blake Edwards and was loosely based on a German film Viktor und Viktoria by Rheinhold Schuenzel from 1933. Schuenzel had also written Some Like it Hot at around the same time, which went on to be made into the hit film in 1959 starring Marilyn Monroe. Viktor und Victoria was remade in English in 1935 as First a Girl. Although the 1930s films covered gender confusion, they had to be careful not to be too overt in relation to homosexuality and transgender themes, because of the context of the time in which they were written. In 1982, Blake Edwards was able to draw out the themes in more detail to create a film that would still appeal to a broad audience and yet not compromise on realism in relation to the variety of people's identities.

The film begins in Paris with struggling artiste Victoria doing an audition but not impressing an impresario with her singing, even though she has the range to sing the legendary high C and smash his wine glass. She goes back to her flat, only to discover she's being evicted for not paying the rent. So hungry she contemplates selling herself for a meatball, but a cockroach interrupts1 so her landlord leaves the flat, taking her suitcase of possessions with him.

Using the cockroach to con a meal out of a café, Victoria meets Toddy, who had heard her singing in the audition as he worked for the impresario. After pandemonium breaks out in the café when the cockroach escapes from the plate, Toddy and Victoria go back to his flat. In the morning, as Victoria has no other possessions, she puts on some of Toddy's boyfriend's clothes. Impressed by how good she looks, Toddy concocts a scheme to make lots of money by promoting her as a man who impersonates a woman exceedingly well.

Thus, Count Victor Grezhinski is born. At his first performance as Victoria, he is watched by King Marchand, a nightclub owner (and gangster) from Chicago, who falls in love with Victoria at first sight. King is confused at the end of the song when the reveal happens and Victoria removes her wig, showing that she was in fact Victor. They meet backstage, and Victoria falls in love with King at first sight, too, but is unable to act on her feelings without betraying the scheme.

As it happens, Victor and Toddy are staying in the same hotel as King, his bodyguard Squash Bernstein and his girlfriend Norma Cassady2. King discovers that Victor is female after all, but still has to work on his feelings when Victoria is in man mode, as he resents the idea of being thought of as gay.

The pair start to work on their relationship, and also work to avoid the people who are suspicious of them, so that they can get ready for the film's rousing cabaret finale.

Julie Andrews had achieved fame as a musical star in the 1960s, with her Oscar-winning performance as Mary Poppins, and her subsequent success as Maria Von Trapp in The Sound of Music. Julie married Blake Edwards in 1969 and appeared in several of the films he directed, including cameos in Pink Panther films and the leading actress role in 10. She received a Best Actress Oscar nomination for playing Victor and Victoria, and won the Golden Globe for Best Actress (Comedy/Musical).

James Garner was chosen for the role of King Marchand because of his expressive face, essential for conveying his thoughts to the film's audience while sitting in the audience of a theatre within the film and watching performances onstage without the opportunity for dialogue. The actor had worked with Julie Andrews before in the film The Americanization of Emily and was famous for playing Jim Rockford in the television series The Rockford Files.

Blake Edwards and Julie Andrews had worked with Robert Preston on the film S.O.B. Robert enjoyed working with Blake Edwards so much that when the director offered him another role he accepted it straight away, without asking what the role would entail. His portrayal of Toddy earned him a nomination for the Best Supporting Actor Oscar.

Lesley Ann Warren was nominated for Best Supporting Actress for her distinctively brash portrayal of King's girlfriend, a cabaret dancer, who is fantastically furious when she thinks he has left her for a man. Alex Karras had been an American Football player, and took a variety of roles as an actor, including a part in the infamous Mel Brooks film Blazing Saddles. John Rhys-Davies had played Barndoor in the 1975 TV adaptation of Quentin Crisp's book The Naked Civil Servant and also took part in a variety of different productions, notably including Raiders of the Lost Ark.

Another expressive actor was Graham Stark, who also featured in the Pink Panther films - as the waiter in the café that experiences the cockroach calamity, and then as a waiter in the cabaret club that Victor performs in, his look of exasperation at the chaos around him adds to the comic effect of the film. Blake Edwards' doctor Charles Bovin had a cameo as a bumbling detective (Dr Bovin was regularly given cameos by Blake, and given pseudonyms to disguise the fact, as he was not an actor by trade - in Victor Victoria he was credited as Sherloque Tanney). Blake's son Geoffrey also had a cameo (uncredited) as a cabaret club dancer who takes a fancy to Victor, describing him as 'divine'.

The music for the film was composed by Henry Mancini, famous for the Pink Panther Theme. Mancini had already worked with Blake Edwards on several occasions, also providing music for productions including Breakfast at Tiffanys. Most of the lyrics were by Leslie Bricusse, who had also worked with Blake Edwards before on a Pink Panther film. The music included an arrangement of the traditional song 'Cherry Ripe', which Julie Andrews sang when she was a child soprano. Other songs included 'Gay Paris', 'Le Jazz Hot' and 'Crazy World'. Unlike earlier musical films, the characters didn't suddenly burst into song, but the tunes were either playing in the background or being performed on stage, so they fitted in appropriately as well as being important to the plot.

The soundtrack won the 1982 Academy Award for Best Original Song Score and its Adaptation or Adaptation Score3.

Even though4 it is a comedy, the film considers themes of identity in some detail. In relation to gender, we see Victor wearing a scarf or high collared shirt so that people don't realise he doesn't have an Adam's Apple, and when he dresses on stage as Victoria, he wears a choker necklace that would disguise the Adam's Apple he would have as a man. We also see Victor learning how to walk in a masculine way, and studying how to perform femininity in dance in a sufficiently broad way for it to look good on stage. Julie Andrews caught a cold during filming, and that helped her to speak with the deep voice Victor used when not on stage (Julie recorded the vocals for the songs before filming started, so she was able to sing as Victor and include notes that were low as well as high). Blake Edwards knew that if the characters in the film believed Victor was a man, then the audience would believe it, too, because the characters would give him credibility. Julie had been worried that her female physique would give her away, but the binding of her chest and the well-cut clothes turned her into Victor in a very convincing way - her femininity merely enhanced his femininity as a gay man who liked dressing as a woman. The audiences at Victor's performances are diverse, adding to the authenticity of the film as well.

Humour around gay stereotypes also appears. Norma thinks it is a waste that Toddy is gay, but he assures her he doesn't waste it. She also thinks the right woman could sort him out, so he retorts that the right woman could sort her out, too. King accepts Victoria's professional life as Victor, but when his bodyguard Squash finds them together, he thinks King is being bold about his sexuality, and that gives him the courage to come out. King is puzzled that such a masculine man as his bodyguard could be gay, so his assumptions are challenged, but has to do more work on that when he decides to prove his own masculinity by fighting a man who appeared to be a suitable opponent but turns out to be a boxing champion, and gay.

Through all the intertwined relationships of the characters, the overall theme is being yourself to be happy.

1Terrified of cockroaches, Julie Andrews' scream when she sees it crawling on the bed is genuine, not acted.2A blonde bombshell in the mould of Norma Jean Baker, aka Marilyn Monroe.3Not the most catchy title, but a welcome award nonetheless.4Or perhaps because.