Alan Hollinghurst - Author Content from the guide to life, the universe and everything 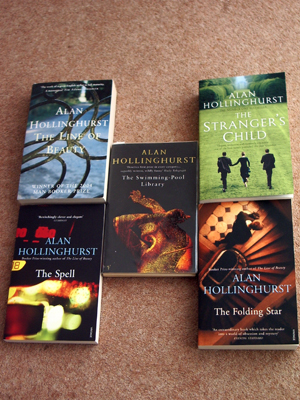 Alan Hollinghurst is an award-winning British author of fiction who is particularly well known in the world of gay culture, although his books do appeal to a variety of audiences.

Born in 1954, Alan was an only child who grew up in Faringdon, a rural town near Oxford, UK. He was sent to boarding school at the age of seven, became a teenager around the time when the law changed and homosexual acts were decriminalised in 1967, and went on to study at Oxford University in 1972. Aware of his sexuality from puberty, and sure he was gay by his late teens, Alan never formally outed himself to his parents, but 'it just sort of seeped out, which seemed to me a perfectly satisfactory way of doing it.'

While at university, Alan shared accommodation with the future Poet Laureate Andrew Motion, and he wrote poetry as well, winning Oxford University's poetry prize the year before Andrew Motion won it.

Alan started writing fiction at the age of 16 and some of his poetry was published in an anthology. He didn't finish writing any of his stories until he moved to London in 1981, when concepts for his first published novel, The Swimming-Pool Library, began to develop in his mind. After graduating he worked as a university lecturer, then served as Deputy Editor of the Times Literary Supplement. The Swimming-Pool Library became a bestseller, helped by Andrew Motion who worked for a publishing house and accepted the manuscript straight away. As a result, Alan was soon able to make a living as a full-time writer.

He has written five novels so far1, plus several short stories and poems. His early novels were generally critically acclaimed, although some reviewers, including John Updike, indicated that his books would be more popular if he didn't write about gay people so much2. Perhaps vindicating that viewpoint, his novel The Line of Beauty, which focused on a family as well as a gay man, won the Man Booker Prize in 2004 and was made into a television series, broadcast in 2006. Adapted by Andrew Davies, famous for his version of Pride and Prejudice starring Colin Firth, Alan met the production team, watched some of the filming, and was happy with the final result.

Alan was a contributor to the 2010 Gay Icons exhibition in the UK's National Portrait Gallery. Each contributor selected six people who they considered to have been icons in their lives and wrote about why they were such an inspiration to them. Alan participated alongside other famous people including Sir Elton John and Sandi Toksvig.

Alan's debut novel, The Swimming-Pool Library, was praised as a clever snapshot of gay life in the 1980s, bound up in a mystery story. The main plot involves William Beckwith, a younger man who meets an older man, Lord Charles Nantwich. Charles invites William to write his biography and hence learn something of the history of gay culture - Charles had been to Oxford in the 1920s, served in the army and travelled to Egypt, which was a revelation to him, then in the 1950s he was imprisoned for indecency. Similar themes occur in the modern day setting - William is a victim of 'gay bashing', he explores the worlds of pornographic movies and nightclubs, and his friend is arrested. Works by Ronald Firbank, an author who was openly gay and wrote in the early 20th Century, are frequently referenced and discussed, augmenting the historical aspects of the book even further. The book includes a variety of erotic scenes - William himself meets a younger man, but also enjoys encounters with men older than him (but not as old as Charles). Both he and Charles find they are most attracted to black men, and both of them experience aristocratic privilege, as they are free to visit gentlemen's clubs, do what they want and don't need to work. The other links they share become clear at the end of the book.

Published in 1988, it won a Somerset Maugham Award for novels by young3 writers.

The Folding Star, published in 1994, again intertwined modern gay life with a historical tale. This time it is the story of a fictional artist, Edgard Orst, whose biography is revealed to a gay teacher, Edward Manners - the narrator of the book. Edward lives in a Belgian town and teaches English to two young men, who are both unable to attend school. One, who has been ill with asthma, is the son of the curator of a museum dedicated to Orst. The other, suspended for bad behaviour, is considered extremely beautiful by Edward, and the book considers Edward's obsession with the younger man, until one evening his dream of them spending a night together comes true.

Alan visited Bruges in Belgium in 1989, which gave him inspiration for the setting of the novel. Also, some scenes in the book were about Edward's first boyfriend, who died suddenly, reflecting the similar loss of Alan's best friend in London in 1984.

The book won the James Tait Black Memorial Prize and was shortlisted for the Man Booker Prize.

This book, from 1998, is a snapshot in the life of four people and their intertwined relationships. Alex, somewhat despondent after breaking up with his boyfriend, finds a new outlook on life when he meets Danny, the son of his ex's new boyfriend. Danny and Alex go clubbing and take drugs together, enjoying a hedonistic party lifestyle with their friends, until they each move into different phases of their lives.

Again, the book is influenced by Alan's experience - he was a studious child, worked hard at university and lived a secluded lifestyle when concentrating on writing, but at the age of 40 he met a younger man who introduced him to a youthful party scene and gave him the opportunity to try the drug Ecstasy.

The Line of Beauty

Alan's next novel, The Line of Beauty, contains some similar themes to his earlier works, including erotic scenes with black men, drug-taking and money. Published in 2003, it is set in the 1980s and mainly considers the politics and events of the time, particularly Thatcherism and the spectre of HIV/AIDS. Centred around a family and their gay lodger, it also explored themes of family life including heterosexual affairs, political scandal, drugs, and mental health problems. Snubbed by critics who hadn't liked The Spell because it didn't have a traditional plot4, The Line of Beauty initially struggled to find a publisher. It was also somewhat disappointing to readers expecting more passion and less context, but it reached a wider audience than his earlier books and went on to win the Man Booker Prize in 2004.

Published in 2011, this is another cleverly constructed novel. Initially, it is about a fictional war poet Cecil Valance, the house he wrote a poem about, and the family who came to know him as a friend in a Brideshead Revisited sort of way5. It is also about his life alongside real historical figures such as the poet Siegfried Sassoon. The main theme is all the biographies that were produced in the many years after Cecil's untimely death in the First World War. The biographers either sought to erase his sexuality or to find out as many details as possible, tasks which were either hindered or helped by the time that had passed since the events took place and the time in which the biographies were being written.

A similar experience happened in Alan's life - he had wanted to write a biography of his favourite author Ronald Firbank, but was unable to gain access to some of the letters that Firbank wrote. Without them, the biography would have potentially missed out rich and important details, so Alan gave up the idea. The poet Rupert Brooke, who died in 1915, also provided inspiration for Cecil, as there are several different biographies about him - in particular, letters Brooke wrote were eventually released to the public domain, and a candid biography of his life was written in 1987.

In this novel, much of the action takes place between chapters, rather than being written about in the chapters, reflecting fragments of memory and biographers piecing together segments of history. Not as explicit as Alan's earlier novels, it is nonetheless erotic in places - the secrecy of Cecil's meetings with his friend George, and later with George's sister Daphne, add to the excitement in a way more common in literature in the past when there were laws about how much could be written. The book proceeds through time in a clear way, but most of the details of people's encounters are left to the reader's imagination.

1Up to the time of writing, 2014.2Others complained when he didn't write enough.3That is, under 35 years old.4Being simply a window into the main characters' world without including any judgement of it, or building up to any spectacular ending.5Like in Evelyn Waugh's novel, the family consists of a daughter, a stoic older brother, and a younger brother who are all influenced by the stranger who visits them in their home.